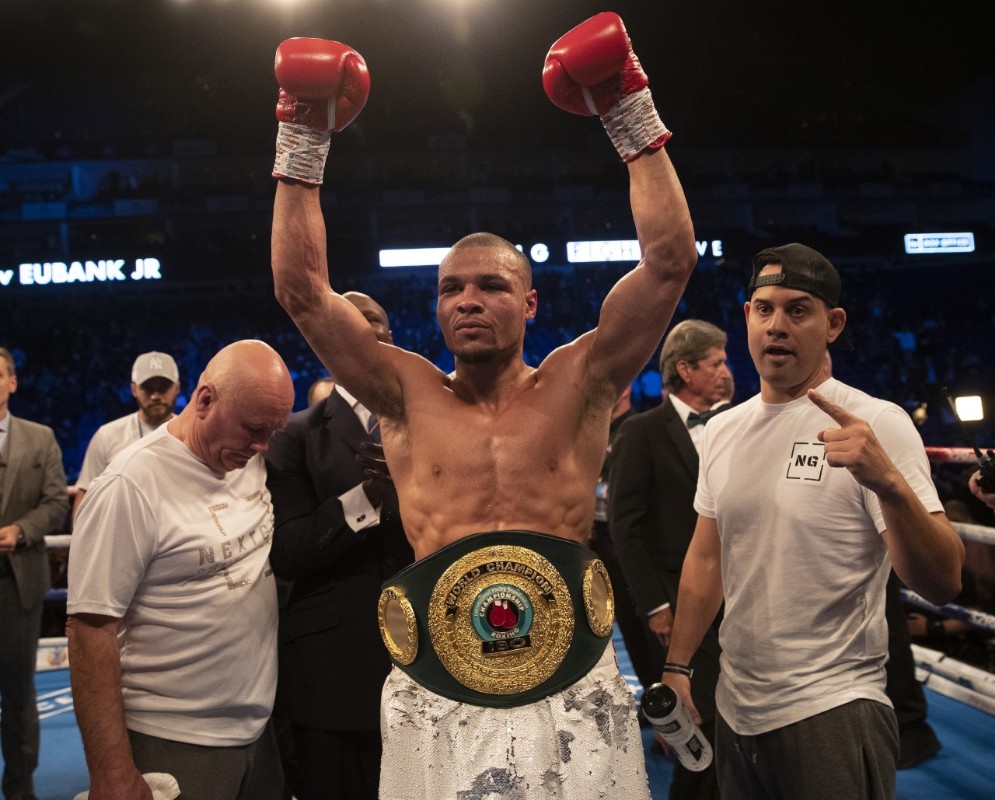 The tension in the air was palpable when Eubank and DeGale finally walked to the ring. There was too much at stake for both and you could see it in their eyes!

People booed at his professional debut, cheered when he lost to George Groves and were more than happy to write him off after the first Truax fight, but, love him or hate him, James DeGale (25-3-1, 15 KO’s) has won everything there is to win both in his Amateur and Pro career.

Nevertheless, all lingering questions about his mental and physical condition have now been answered for him by Chris Eubank Jr (28-2, 21 KO’s) who knocked him down twice on his way to win a unanimous decision in their anticipated grudge match yesterday at the O2 Arena. Has Eubank really improved or was Chunky just finished? To be fair, a bit of both. But it was not all about them…

The first televised bout of the evening featured a British title eliminator at Light-Heavyweight between Andre Sterling (10-0, 4 KO’s) and Ricky Summers (15-2, 5 KO’s). After a feel-out session he took comfortably by showing more initiative, Sterling seemed to feel it was safe to open up in the second and charged forward only to be knocked down by Summers’ right hand.

Andre clinched to recover and an accidental clash of heads occurred leaving Ricky cut over his right eye. He lost his momentum there and appeared very cautious in the third while Sterling had fully recovered and was going aggressively for the body. He piled up points in the next three rounds by simply working off the jab with Summers active only in spurts.

Hooks started landing for Sterling in the seventh. Ricky showed more urgency and had some breakthrough in the following two sessions but got caught by a big right hook in the last round and looked in trouble before the bell rang. Sterling deservedly won a unanimous decision by scores of 97-93 and 97-92 twice and should be challenging for the British title soon enough.

Lee Selby’s (27-2, 9 KO’s) Lightweight debut was made as uncomfortable as can be by a rough and determined opponent in American Omar Douglas (19-3, 13 KO’s).

The former IBF champion started the bout circling around Douglas and peppering him from the outside with straight punches while the latter was leaping in to close the gap but not finding any openings.

In the second, Lee was still landing 1-2 combinations when again the American jumped in to rough him up and accidentally head butted him causing a cut on his right eye. It was still a balanced match in the next two rounds, although Omar was connecting more and more often with hooks, always on the attack and seemingly enjoying himself.

His physicality, aggression and work rate seemed to overwhelm Selby and gave him the lead in the middle section of the fight culminating with another head butt in round seven which cut Selby over the left eye as well.

In the next round a shift in Lee’s favour was sensed as Douglas started to slow down and appeared to tire allowing the Welsh warrior to re-assert his straight punches and keep the opponent at distance.

Round 10 saw the American holding more often and reluctant to let go, swelling now showing on his forehead, while Lee was very much fresh and active and kept it up till the final bell. It was a close affair but Selby got the nod by scores of 116-112 twice and 115-114.

A focused, professional and brave performance by the Welshman and probably the highlight of the bill.

Given the poor condition displayed at the weigh-in, few gave former WBC champion Bermane Stiverne (25-4-1, 21 KO’s) a chance to make it past the third round but thanks to a solid chin and the leaks in Joe Joyce’s (8-0, 8 KO’s) defence, he managed to make things slightly more interesting than expected in this Heavyweight affair.

As the bell rang, it was actually Stiverne to open up first flinging his left and tagging the “Juggernaut” with hooks. Joe appeared stiff in his movement and looking only to land the big one. When caught, he exploded but without accuracy and Bermane made it to the bell. The former champion’s output in the second was just enough for him not to be stopped but he found himself at the end of a relentless rally that left him bamboozled and completely open.

In the third a right hand from Joyce made him touch the canvas and left him a sitting duck for the rest of the round. Instructions to move his head more from his corner actually worked for him in the fourth as he was able to easily slip a lot of Joe’s shots although shipping a straight right hand that would have probably stopped a lesser opponent.

The last 2 rounds were painful to watch as Joyce found openings around and inside Stiverne’s guard landing hooks and uppercuts at will with nothing coming back. Thankfully the referee had seen enough and halted proceedings at 2:20 of the sixth round. Joyce showed a good chin of his own throughout the bout, his fitness is not in question and size and power are obvious assets, still it is hard to give him a chance at the top level of the division.

His lack of mobility and non-existing defence look almost amateurish along with his penchant for immediate retaliation when tagged. But, this is only his eighth fight as a pro and hopefully Abel Sanchez will be able to correct the flaws. In the meanwhile, he remains one to watch in the division.

The tension in the air was palpable when Eubank and DeGale finally walked to the ring. There was too much at stake for both and you could see it in their eyes. Eubank was booed as usual but that only seemed to make him more determined in his purpose.

DeGale started the feel out process by pawing at Chris with his right hand and landing a couple of sneaky lefts which might have been enough to nick the first round, nevertheless he was cut on his right eye.

Reality sunk in immediately in the second as Eubank knocked him down with a left hook and swarmed all over him furiously. Chunky seemed in disbelief of what just happened and looked unfocused as he was retreating in straight lines. Jr tagged DeGale again with right hands in the third, looking fast and strong, also taunting him.

James disrupted the action temporarily with a low blow in the fourth and resorted to hitting and holding, as wary of his opponent’s power but ended the round in trouble on the ropes.

Chris was more patient in the fifth, waiting for the former champion to commit before striking. Chunky was elusive in the sixth but from this point onwards it looked like he was just trying to survive.

His negative approach allowed Eubank to win rounds landing only single punches, until he increased the volumes and started putting combinations together in the ninth.

A left hook opened the way for an onslaught which saw DeGale touching the canvas again in the tenth. Jr’s frustration at his opponent’s refusal to engage resulted in him slamming James on the floor in the eleventh which cost him a point deduction, but that did not make a difference in the result at that point as Chris sealed the deal catching him flush with a right hand and a thunderous left hook in the final round to gain a 114-112, 115-112 and 117-109 unanimous decision.

“I’m back where I need to be, at the top of the food chain and now I’m coming for all the other belts in the Super-Middleweight division.” said Eubank Jr. after the fight.

“I knew he (DeGale) would come in here and run, I’ve been working on my jabs, he is a very slick southpaw but the game plan worked, smart pressure, not getting too ahead of myself, picking my shots and choosing my time to attack.”

DeGale also took a moment to deservedly reflect, despite the defeat, on his incredible career and achievements in the ring, “I’ve been to the heights of boxing, I’ve won an Olympic gold medal, won the world title twice, made history and I’ve boxed the best around the world, I’ve left my mark in boxing.”

It was refreshing to see the former rivals finally paying each other respect in the post fight interviews as Eubank praised the former IBF middleweight champion and Olympic Gold medallist for not quitting and fighting till the end, while the latter admitted he had not done nearly enough to deserve victory. A bitter note to end his career on but in retrospective there is nothing for James DeGale to regret or be ashamed of. He fulfilled all the promises, left it all in the ring and can walk away with his head held as high.

On the other hand, Chris has finally added to his record the signature win he needed to establish his credentials at world level, although the critics will credit it more to Chunky’s being washed up rather than to his own doing.

Nevertheless, with Dirrell regaining the WBC title and Billy Joe Saunders crashing the division, things are looking interesting at Super Middleweight and the son of the 90’s legend has never failed to entertain us even in defeat. Good match-ups are on the way.

By the way, in case you did not notice the bout was for the IBO Super Middleweight title.

Belfast southpaw Anthony Cacace defeated Argentina’s Alan Castillo to record a sold points win on scores of 79-74 as he looks to get back into title contention this year.

Full Results from the o2