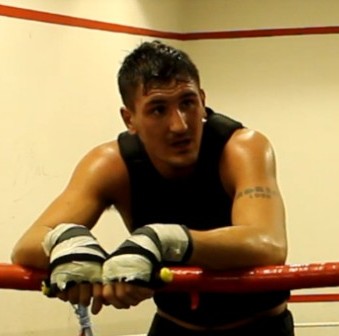 Blackpool’s Matty Askin returns to action this Saturday (December 12) at his hometown’s Winter Gardens, just a couple of months after being involved in one of 2015’s most controversial fights.

After a fiery build-up, Askin took on Swindon’s Lawrence Bennett in an October defence of his English cruiserweight title only to be bundled out of the York Hall ring in the first round.  That wrestling move by Bennett culminated in severe bruising to Matty’s back and ribs, and saw the aborted contest declared a draw.

Now fully fit again, a vengeful Askin gets a marking-time fight at the Winter Gardens but has revealed he is desperate to lock horns again in a highly-anticipated grudge rematch against Bennett.

“It was deliberate.  You only have to look at the video, he knows exactly what he was doing,” fumed Askin.  “He might not have meant for us to go through the ropes but he did rugby tackle me!  When I was on the table he had chance after chance [to get up], even the ref had hold of his legs trying to drag him off, but he still wouldn’t.  I want the rematch and want to teach him a lesson.  You only have to look at our records, you can see the gulf in class.

“I feel fully recovered and great now ahead of this fight [in Blackpool].  I’ve been sparring fantastic; better than ever.  I’ve been in the gym every night and am looking forward to performing on Saturday.”

A former senior ABA champion, and touted by Sky Sports as one of their ’11 for 2011’ prospects to watch, 26-year-old Askin’s career hasn’t reached the potential many envisaged.  Look closely at his 22-fight ledger though and his three defeats have all come in top company – to former British champ Jon-Lewis Dickinson, world title challenger Ovill Mckenzie, and world champion Krzysztof Glowacki.

Far from being demoralised by his trio of losses, Askin believes he has shown he can operate at the highest level and wants to be back mixing with the UK and Europe’s top cruiserweights in 2016.

“I’m more ambitious now than when I started because I’ve showed I belong at that level,” said Askin, who went the distance with both McKenzie and Dickinson.  “I had a long time out before I fought Mckenzie and it could’ve swung either way.  I lost to Glowacki, but I pushed him for 11 rounds [before being stopped] and he’s now a world champion.  And Dickinson was just a bad mistake.  I think I’ve got the beating of all of them.  We’re looking at big things for next year, and I definitely want the British title.”

Tickets priced at £30 (general), £50 (ringside) are available from all boxers, to purchase tickets online or to watch the live, free stream visit: vipboxing.tv