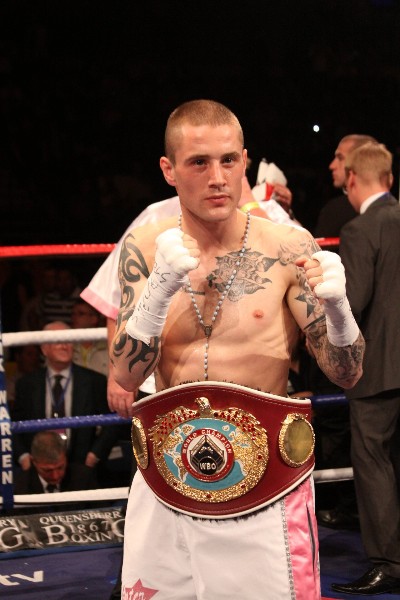 “The Rickster” Ricky Burns could book yet another shot at the world title with WBO lightweight champion Terry Flanagan should he come through successfully in winning ways on Anthony Joshua’s undercard in April.

The Scot who boasts a record of (39-5-1-KO13) is a seasoned pro and is a former two-weight world champion but has suffered defeats to Terence Crawford, Dejan Zlaticanin and Omar Figueroa in the past two years as he has faced issues outside of the ring including financial problems.

However, after stopping Prince Ofotsu and Josh King in his most recent fights, the 32-year-old veteran is looking at climbing back up the ladder once again and his manager Alex Morrison is positive over the future.

Morrison has been quoted as saying: “Ricky’s stopped his last two opponents and we’ve been told that he’ll be fighting for a belt of some kind on the undercard of the Joshua bill.

“If he comes through that then he’ll definitely be given a world title shot in the summer – probably against WBO lightweight champ Terry Flanagan.

“This is great news for Ricky, especially since his bankruptcy order ends in March. This will be a fresh start for him.”

Burns reigned as a world champion in two divisions over the years with holding both super-featherweight and lightweight titles earlier in his career, beating the likes of Roman Martinez, Michael Katsidis and Kevin Mitchell along the way.

Burns used to have Flanagan travel up to Scotland from Manchester when he was world champion to spar with him. That was when Flanagan was up and coming and at the time Burns’ trainer Billy Nelson was very praising of Flanagan’s talents and tipped Flanagan to go on to bigger things, he now holds the same WBO title once held by Burns.

Flanagan vs Burns is a fight that could be made, that is if Flanagan comes through his next defence against Liverpool’s Derry Mathews which takes place on 13th February 2016. Mathews will have his own ambitions to claim the world lightweight title and in his home city of Liverpool could prove to be a tough defence for the Mancunian.

More on Flanagan vs Mathews

The lightweight division has some great potential match-ups and non more so than on British soil, with some of our lightweights leading the way on the world scene.