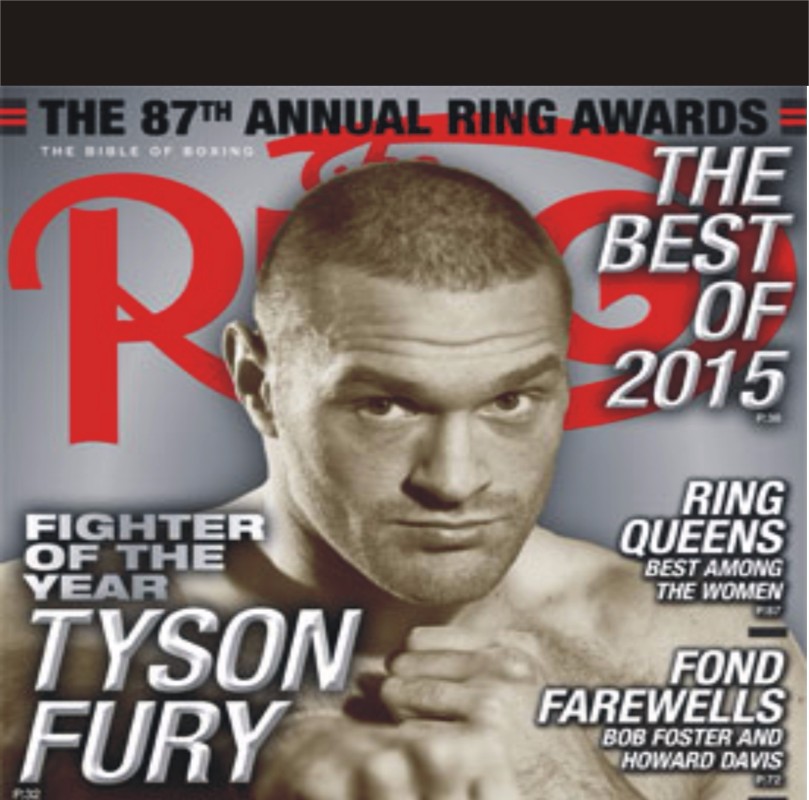 (Have you got a story? Contact us and if it is relevant news we will feature it in the next round-up)

The Ring magazine this week honoured world heavyweight champion Tyson Fury as its 2015 fighter of the year, as he appeared on the front page of their magazine known as the bible of boxing.
Former world welterweight and light-welterweight champion Ricky Hatton, in 2005, is the only other Briton to win the award.

Fury’s victory over Ukrainian Wladimir Klitschko to claim the IBF, WBA and WBO titles in November won him the accolade. There was another honour bestowed on the Manchester fighter this week too, when his name sake Mike Tyson, the former undisputed heavyweight champion, said that Fury, who was named after him as a baby, is… “The best heavyweight champion of the world since myself. He is the man, I don’t care what anybody says. I know this is going to sound ignorant, he can say what he wants to say. You know who is going to look up to him? The people who never thought they had a chance in their life.” More on Tyson Fury here.

WBO super-welterweight world champion Liam Smith is considering an offer to take on Mexican superstar Saul ‘Canelo’ Alvarez. If a fight was agreed it would likely take place in America in May or September in Las Vegas. It would be a fight hard to turn down for Smith and what a potentially great fight it would be! Alvarez, whos only loss was to Floyd Mayweather, recently claimed the WBC middleweight title outpointing Miguel Cotto. What weight or circumstances the fight would be made at, who knows, but we want to see it! And don’t rule Smith out, we don’t know yet just how good this kid can be!

IBF welterweight champion, Kell Brook, (35-0, 24KOs) will have to face his mandatory challenger, the Canadian Kevin Bizier, (25-2, 17KOs) before he takes on Amir Khan in an all British clash, with June 4th being touted as a gap to make the fight at Wembley Stadium. More on Kell Brook

Amir Khan is back in California training with coach Virgil Hunter as he ticks over in preparation to face fellow Brit Kell Brook for his IBF welterweight title on June 4th at Wembley Stadium. With Brook set to face Kevin Bizier first, maybe the Bolton former world champion Khan will make a warm up fight, after being out of the ring for 13 month’s, after defeating Chris Algieri in May. More on Amir Khan.

The Scott Quigg and Carl Frampton winner could face Guillermo Rigondeaux in July. More on Quigg-Frampton.

A potential Middleweight unification fight between Britain’s WBO middleweight champion Billy Joe Saunders and P4P star Gennady Golovkin has been discussed recently between the two parties after it was revealed Golovkin had challenge the new British world champion to a unification fight. But Saunders who defeated Andy lee in December to win the belt, will have a fight in March first before any fight with Golovkin will be made, which could be in an open air stadium in the UK if a deal can be struck. Read more on Billy Joe Saunders.

James DeGale is set to make the second defence of his IBF world super-middleweight tile against must mandatory challenger Jose Uzcategui. More on James Degale

There hasn’t been much boxing over the festive period and weeks commencing, but Dereck Chisora managed to get a fight in, when he stopped Andras Csomor in the second round in Germany on Saturday (Jan 9). He is now expected to face Dillian Whyte after his fellow Londoner called him out on Twitter this week. Chisora gladly accepted! The fight could be for the British title if Anthony Joshua decides to relinquish the belt he won by knocking out Whyte last month. More on Dereck Chisora

David Haye believes he is on collision course with Anthony Joshua as he looks to rebuild his career. The Hayemaker returns to the ring at London’s O2 Arena against Australian Mark de Mori this Saturday after after being out of the ring more than three and a half years. More on David Haye.

Lee Selby is not expected to fight again until April. The IBF featherweight champion must face the winner of Eric Hunter and Jonathan Barros who meet on January 16 in a final eliminator for Selby’s belt. There is a big Matchroom show set for April and the Barry man is set to appear on that. More on Lee Selby.

Sylvester Stallone’s “Creed” is to be be released on January 15th which sees Tony Bellew as the main adversary playing the role of “Pretty”Ricky Conlan. It has already received good reviews in America and last night in the UK at the two premier screenings in London and Liverpool and will see surely see Bomber take on a whole new level of fame here in Britain. His next fight will almost definitely be a PPV world title fight.

Rumours are circulating that Matchroom fighters Martin Murray and Paul Smith could be on a collision course for a domestic dust up in 2016 as they near the back end of their careers.

Stephen Smith hopes to follow in brother Liam’s footsteps and bring another world title belt back to the Smith houshold when he challenges IBF super-featherweight champion Puerto Rico’s Jose Pedraza at the Theatre,  Madison Square Garden in New York on March 26th. The pair were set to face off on February 20th, but but has been moved forward a month.
[sam id=”1″ codes=”true”]

George Groves is fighting on the 30th of January at the Copper Box Arena, London, against Italian Andrea Di Luisa. Groves is on the trail of a 4th world title challenge. More on Groves.

Willie Limond will take on French champion Christopher Sebir on 19 March for the WBC silver title at the Bellahouston. Glasgow light-welterweight Limond has not fought for 18 months since he defeated Curtis Woodhouse for the British and Commonwealth titles in June 2014. Now 36 years old, Limond who has recently set up a promotions company with trainer Billy Nelson and businessman James White says he has got the love back for boxing and is ready to take his world chance against Sebir.

WBO lightweight world champion Terry Flanagan will defend his world title at the Liverpool’s Echo Arena on February 13th against home fighter Derry Mathews. At yesterday’s press conference, things hotted up when both verbally confronted each other at the official presser to build the fight. Flanagan said: “I pasted him as a boy and now I’m a man I’ll do even more damage.” referring to his points win over Mathews in the Prizefighter in October 2012. Mathews responded, “I beat Anthony Crolla and Steve Foster and I’ll make Flanagan a hat-trick of Mancs.” More on Flanagan vs Mathews.

Highly rated super-featherweight prospect from Manchester Zelfa ‘Brown Flash’ Barrett (7-0, 2KOs) will have his next fight on the undercard of Terry Flanagan’s world title defence against Derry Mathews at the Echo Arena on February 13th after signing a 6 fight deal with Frank Warren. Barrett who is trained by his uncle former champion Pat Barrett will still fight for Black Flash Promotions who he started his career with and will feature on their next show on March 5th in Middleton. Looks like it will be a busy year for this talented boxer who turned pro a year ago.

WBA world bantamweight champion Jamie McDonnell could face unbeaten Puerto Rican Emmanuel Rodriguez in American this year in defence of his title. Talks are also on-going also for the Yorkshireman to take on WBC champion Shinsuke Yamanaka in a big unification scrap. And dont rule out an all British unification fight with Lee Haskins either. That fight makes perfect sense if ever one did. Haskins defeated McDonnell way back in 2008 on points over 8 rounds. It was McDonnell’s 11th fight and Haskins 18th. Move forward to 2016, both are world champions at the same weight and the fight makes its self, if the management teams and promoters can strike a deal. Haskins is preparing to fight again in the spring.

The vacant WBO Inter-continental title fight between unbeaten in 14, Gary Corcoran and unbeaten in 14, Joe Selkirk set for Dublin on February 6th, is off! After Liverpool’s Selkirk withdrew after suffering an injured knee. Londoner Corcoran is still expected to fight for the belt against another opponent TBA.

BURTON AND MORRISON ADDED TO QUIGG VS FRAMPTON BILL

Tyson Fury’s cousin, unbeaten light-heavyweight Hosea Burton will fight on the undercard of the big Manchester unification showdown between Scott Quigg and Carl Frampton on February 27th. Mancunian Burton, a relative of the great bare knuckle champion, ‘King of the Gypsies Uriah Burton, is a gym mate of Quigg and was suppose to take on Tony Hill for the vacant International light-heavyweight crown in November last year, but withdrew days before through injury. Burton is a class act who can go on to big things. Also on the bill will be Middleweight prospect Marcus Morrison, who has his 9th fight, also a gym mate of Quigg’s and Burton, he is tipped for big things. All are trained by ‘British Boxers Coach of the 2015’ Joe Gallgher. Read more