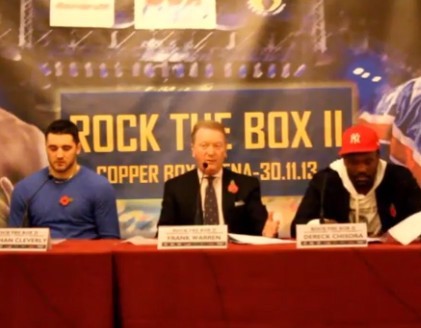 Video: Cleverly and Chisora to ‘Rock the Box’

Former light-heavyweight champion Nathan Cleverly will return to the ring since defeat to Russian Sergey Kovalev, when he takes on Australian Daniel Ammann for the Vacant Commonwealth cruiserweight belt on Saturday 30th November at London’s Copper Box Arena on a show titled ‘Rock the Box II’

The 25-year-old lost his unbeaten record and WBO World Light-Heavyweight crown to big-hitting Kovalev in August, but after a break away from boxing, Cleverly is desperate to get back in the ring and hopes to become a two weight world champion by claiming the world title at cruiserweight in 2014.

“I’m ready to return and I can’t wait for November 30th at the Copper Box Arena and show that Nathan Cleverly is back,” He said.

“I’ve got the hunger and desire back and I want to be a world champion again. I miss having the belt around my waist, but it’s not just about the belt. I didn’t want to let my fans down, who have supported me in my career, my family down and more importantly I didn’t want to let myself down by going out on a loss, I knew deep down that I wanted to fight again and I just needed time to focus on what I wanted to do,”

“I was on a high for so long winning the British, Commonwealth and European titles in quick time and then winning the world title and making five successful defences. In five years I had 15 championship fights and I felt invincible. The loss to Kovalev has brought me back down to earth and made me realise what I want and that is to be world champion again,”

“The thought of winning a second world title now really excites and motivates me, but the road back will be hard and I’m looking forward to testing my character and resolve.”

Featuring alongside Cleverly on the Copper Box bill is big Dereck Chisora who makes the first defence of his European Heavyweight title against Matteo Modugno,

Cleverly’s addition to the Copper Box Arena show replaces British and Commonwealth Middleweight Champion Billy Joe Saunders who was scheduled to defend his titles on the show, but a slight hand injury picked up in his last fight against John Ryder has not healed in time which has meant that he has had to withdraw.