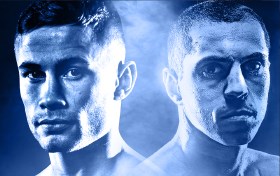 QUIGG VS FRAMPTON LANDS ON SHOWTIME

Carl Frampton and Scott Quigg’s World Super-Bantamweight unification blockbuster will be shown live on SHOWTIME in the US on February 27.

Frampton travels to Manchester to put his IBF crown on the line against Bury man Quigg, who defends his WBA strap against his Belfast rival.

The sold-out Manchester Arena hosts the hotly-anticipated battle between the unbeaten pair and American fight fans can expect to savour a fevered atmosphere through their screens with tickets split 50-50 between Frampton’s travelling support from Northern Ireland and Quigg’s vocal Lancastrian backing.

“I am thrilled to be boxing on SHOWTIME and defending my world title in front of such a large television audience in the US,” said Frampton.

“SHOWTIME is the home of huge global boxing events and I am delighted that my team have ensured I will box on such a terrific platform. I enjoyed fighting on sister network CBS last July and I want to continue to build my fan base in the United States. Roll on February 27 in Manchester, where I will comprehensively beat Scott Quigg.”

“It’s brilliant that the American fans will get to see this brilliant fight,” said Quigg. “I’ve always wanted to box in a massive fight in the US, and I believe that when I beat Carl in style on February 27 in front of a sold-out crowd live on SHOWTIME, I’ll gain plenty of fans in the States.”