Brave Quigg can come again, the impressive Frampton moves on 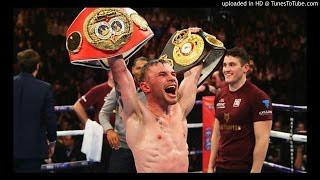 Lets get one thing right, boxers are a different breed to the average ombre. To step in a ring to face another trained, fit human being throwing punches at you, takes some doing. Add to that all the people you know and respect watching you at ringside, your grand-parents, parents, wife, girlfriend, their friends, your friends, maybe your children, (husband, boyfriend) everyone with their heart in their mouths and you, alone, the subject of everyone’s angst, whilst trying to keep your pride and jaw intact, ultimately fighting for your life in the glare of all that matters to you. Add to that another 20,000 plus, thirsty fight fans and officials in attendance and the millions watching around the world! Now that is pressure!

Carl Frampton and Scott Quigg entered that foresaid pressure cooker last Saturday night and found the nerve and courage to see it through to the end. Frampton (22-0, 14KOs) emerged the winner of a fight, that had been built up that much prior, we were expecting to see GBH administered one way or another, whichever side you were on. What entailed was in fact was a tactical counter punching affair, both stuck to their game plan to the letter, never giving the other a sniff of a substantial shot for the 12 rounds it lasted. Result? A fight to forget, but a night to remember.

That was a special night. We did it! pic.twitter.com/m3C6GvfOwU