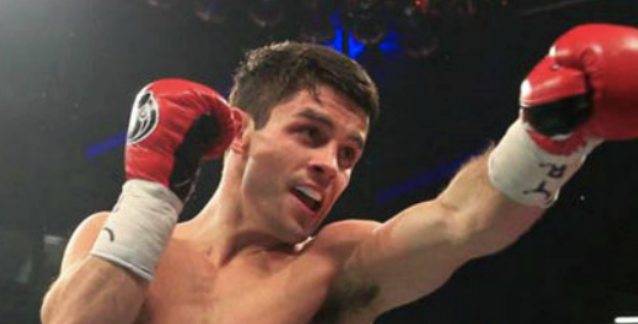 Callum (below far left) is the current British, Commonwealth and European super-middleweight champion and rated as one of the best prospects in the UK and also tipped for world glory.

Stephen Smith (2nd from right) with his British title and brothers Liam (right), Paul and Callum.

The 30-year-old Smith, sole career defeat came at the hands of current IBF featherweight champion Lee Selby in 2011. After the win Selby went onto world level and Smith moved up a weight and fought his way back into title contention and this great opportunity Saturday night. Smith earned the shot by stopping Devis Boschiero in the sixth round at Liverpool’s Olympia in September 2015 and as since waited patiently for this moment.

Switch hitting awkward champion Pedraza, won the vacant title in June last year when he outpointed Andrey Klimov on the undercard of Deontay Wilder’s world heavyweight title defence against Eric Molina, and has since defended it via a split decision points win against Edner Cherry in October 2015, his last fight.

It appears this fight was difficult to make or pin down. It was first mooted for December last year, then dates in January, February. It was then confirmed for  March 26th, before being moved back again to April 16th. So both boxers have been out of the ring for nearly six months

Smith’s old amateur boxing club The Rotunda ABC in Liverpool gave their former fighter some encouragement and best wishes before he boarded his flight to America this week, when they made a banner with the words, ‘Goodluck ‘Swifty’ Bring the world title back to Liverpool – Best wishes from everybody at the Rotunda.’

Boss banner to wish me luck from everyone at my club @rotundaabc1 . Couldn’t be prouder to be a part of this great club, owe them everything x