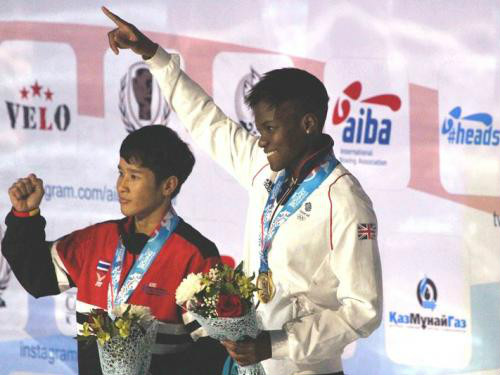 Adams, 33, the reigning Olympic, world and Commonwealth and European champion, finally claimed the last remaining major title to elude her via a split decision and will head to the Rio Olympics this summer raring to go.

The victory gives Adams a unique career grand slam and means she is the only female boxer in the history of the sport to have won every major title available to her.

The world championship glory ended a long period of frustration in the tournament for Adams, having been forced to settle for three consecutive silver medals before missing the 2014 event in South Korea due to injury. It has completed a remarkable journey for both the Leeds boxer and the Great Britain women’s boxing squad, which was yet to be inaugurated when she won her first world medal in Ningbo, China in 2008.

Adams, whose win in Astana was backed up by a nine-strong support staff of coaches, medical officers, a nutritionist and a psychologist, was quick to reflect on the changes that made her path to domination possible.

“If you’d told me in Ningbo in 2008 that I’d be here now and would have completed the whole set of medals I would probably never have believed you.” said Adams.

“Ningbo was before women’s boxing got into the Olympics and we hardly had anything. We didn’t even have a physio travelling with us and we arrived two days before the tournament with an eight-hour time difference. Sometimes I wonder how I managed to get through it all.

“But things have changed massively since then, especially since women’s boxing got into the Olympics. We had a brilliant support team behind us out here, and that makes a huge difference.”

Adams’ win over the experienced Laopeam was clearer than the verdict suggests.