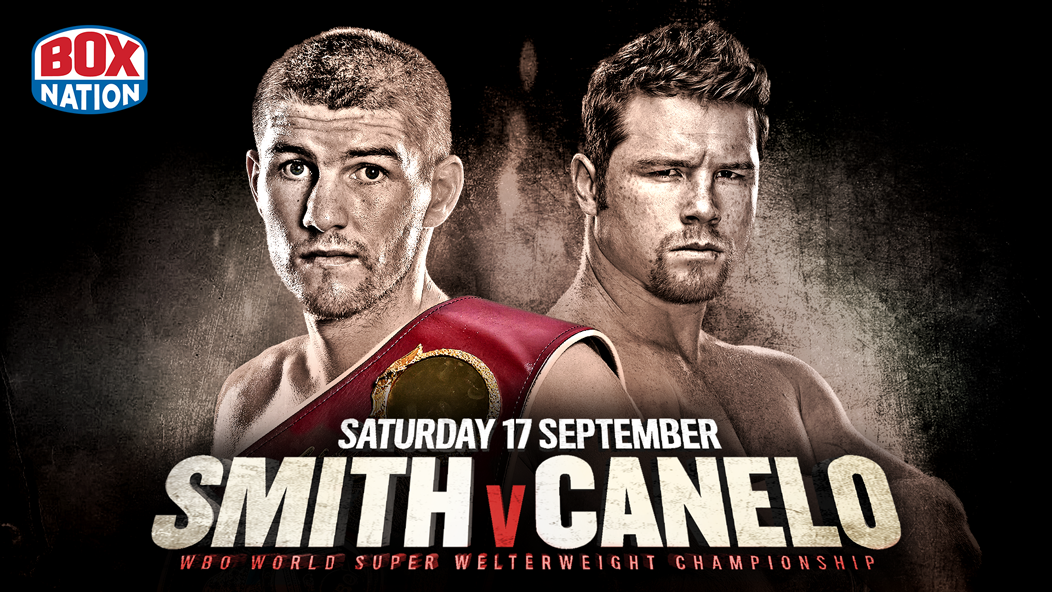 The mega-event promoted by Golden Boy Promotions will be in association with Frank Warren.

Alvarez, the former unified WBC and WBA World Super-Welterweight Champion, has captivated fans around the world with his all-action brand of fighting and brutal knockout power.

With an outstanding record of 47 wins, 1 loss, 1 draw and 33 KO’s, his sole loss came against then pound-for-pound great Floyd Mayweather Jr. on points, but has since gone on to lay claim to be boxing’s biggest draw and one of the best and most recognised fighters in the sport.

In his most recent outing Canelo combined his power and ferocious combination punching when he brutally knocked out Bolton’s Amir Khan with a savage right hand in the sixth round, which was live on BoxNation.

“I am very pleased to announce my next fight against Liam Smith, a tremendous fighter with real knockout power, and the WBO Super-Welterweight World Title owner,” said Alvarez. “I have no doubt that this fight will be give and take, which will fill the expectations of the fans, and I will work with all the enthusiasm as I always do to get the upper hand on 17 September.”

Following his sensational performance against Thompson, Smith returned to the Manchester Arena two months later to blast out Mancunian Jimmy Kelly with another impressive seventh round TKO. ‘Beefy’ made a hero’s return to Liverpool earlier this month where he disposed of Montenegrin challenger Predrag Radosevic with a crippling second round body shot.

After emphatically announcing himself on the world stage Smith is now gearing up for the biggest fight of his life and is determined to fulfill his boyhood dream of headlining in the U.S.

“I am delighted to get the opportunity to defend my World Championship again, this time against the biggest name in world boxing, Canelo Alvarez, and headline in America which is a dream I have had since I started in boxing.

“This fight will allow me to make a name for myself in the U.S. and show the American’s and Mexican’s just how good I am. As soon as I became World Champion my next goal was to make my name across the Atlantic and this is the big stage that will enable me to do that.”

“I thank my team for getting me this opportunity: Frank Warren, BoxNation, Daniel and the MGM Team and of course Oscar De La Hoya of Golden Boy and the WBO for providing it. My trainer Joe Gallagher and I are going to initiate a plan to ensure we beat Canelo and shake up the world of boxing. I am confident of keeping my title on 17th September and returning to Liverpool with my belt still around my waist.”

Promoter Frank Warren is thrilled to have secured Smith a mega-fight in America and is backing his man to bring home his belt.

He said: “Liam grabbed the opportunity to take on Alvarez. This is a fantastic chance for Liam to showcase his talent in such a high profile fight and in America. He believes, as do I, that he has the tools to beat Alvarez and stake his own claim to be the world’s best.”

BoxNation, the Channel of Champions, will televise the show live and exclusive in the UK on Sky 437/HD 490, Virgin 546, TalkTalk 415, Freeview 255 and also on smart connected devices via multiple platforms. Go to BOXNATION WEBSITE

BIG PROSPECT MUHAMMAD ALI - ROUND ON PADS WITH ARNIE FARNELL

RICKY HATTON ON THE FIGHT THAT GOT AWAY, CRACKING AMERICA AND MAKING HIS PRO DEBUT 23 YEARS AGO!

KASH ALI - TALKS NEXT FIGHT IN A CAR PARK! REFLECTS ON PRICE FIGHT & HIS LINK UP WITH RICHARD TOWERS