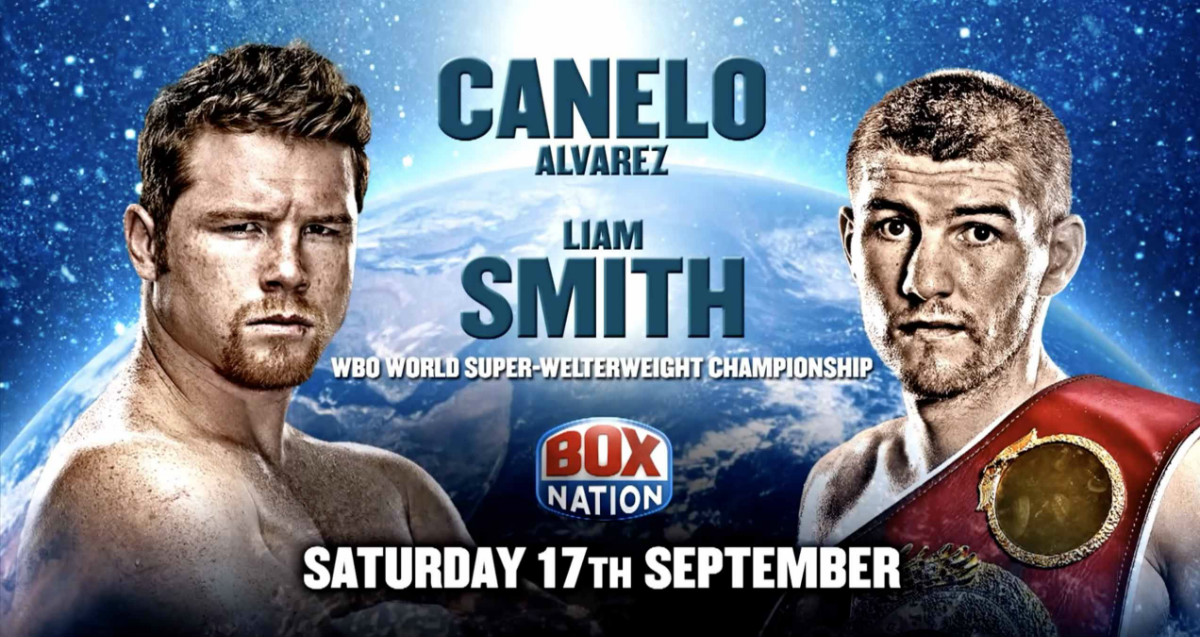 Liam Smith vs Canelo Alvarez and a tale of two brothers

Liam Smith and Saul Alvarez face off on September 17th in the AT&T Arena in Texas, in what could be a pivotal fight for both protagonists. Smith, the world champion defending his title and Saul Alvarez, Mexican star and in his thirteen fight against a former or current world champion looking to rip it away from him in front of an audience spanning across Europe to the United States and Mexico.

Liam ‘Beefy’ Smith, is the second youngest of four brothers and currently the WBO Light Middleweight champion of the world. Boxing is an institution in his hometown of Liverpool, just as much as the two veins that form part of the lifeblood of the city, Liverpool and Everton football clubs. Growing up in a household with two older brothers will naturally toughen you up, but growing up with three boxers who themselves grew up to become world level prize fighters, gives you a unique insight into the sport that you only receive amidst a family that follows pugilism from an early age.

5486 miles away across the Atlantic in Guadalajara, Mexico was born Saul Alvarez two years after Smith. He too was born into a family of fighters as the youngest of eight children, with all six of his elder brothers becoming professional boxers. Alvarez started to learn how to box in a gym relatively late at aged 13, however not too dissimilar to Smith, growing up amongst a litter of boys one quickly learns how to fight. In 2004, finished as runner up in the Junior Mexican Championships, and came back stronger with more determination to fight his way through to becoming the Junior Mexican Champion aged 15. Tallying a record of 44 wins and 2 losses, three months after his 15th birthday, Canelo meaning cinnamon in Spanish and a reference to his hair, signed his professional contract.

Back in Merseyside, hitting his first bag at the Rotunda ABC, Liam was learning the tools of his trade under the tutelage of one of boxing’s most successful trainers in Joe Gallagher. Countless hours were spent honing his craft, sparring his brothers and other members, each showing the other no quarter inside the ring. It can be no surprise that this regimen built a tough young fighter who in his amateur career would win the ABA championships twice at light welterweight before following in the footsteps of his two elder brothers and signing a professional contract at the age of 20.

Still relatively young, both fighters took to the pro ranks like ducks to water. Canelo began to excel as a pro not only because he stood out from the crowd as a red haired, pale skinned Mexican, but also because of his ferocious attacks that often pulverised and crippled his opponents on the canvas. The father and son team of Chepo and Eddy Reynoso who had nurtured their boxer from his beginnings were now grooming him for success on the world stage of prize fighting. As well as the pride of the Mayans that fuels Mexican boxers to come

forward aggressively, never taking too their heels and ready to go out on their shields, Canelo is further fuelled by the level of stardom he has achieved, following in the illustrious path of many Gran Campeón such as Salvador Sanchez, Julio Cesar Chavez, and Erik Morales as fighting face of his country across the world.

Smith’s style too was perfectly suited for the professional side of the sport. His aggressive punching with hooks and uppercuts and a tight guard would lead him towards amassing a record of 23 wins, with over half of those wins coming by way of stoppage. Being well-schooled at the Gallagher Gym and training amidst a camp of elite boxers kept him sharp, his pin point punching finely tuned to throw with the force necessary to stop any boxer in his division should he catch them with his leather. Fuelled by a parallel pride for his native Merseyside, Smith would go onto blasting his way to becoming WBO World light middleweight champion in spectacular fashion, starting rather defensive before confidently punching his way to a TKO victory in the seventh round.

The leather that broke down opponents across Mexico and now regularly across America thrown by Alvarez just as vicious. One of the flashiest boxers in the sport, he proudly boasts a highlight reel of textbook knockouts that displays his jolting power as well as the fluid accuracy of his pugilism. A devastating right uppercut thrown on outside that lurches the head of his opponent towards the ceiling, before it is found by a left hook to send them to the canvas in a textbook combination. Canelo also maintains an incessant attack to the body in good Mexican fashion, aimed at making his opponent wilt and give up their fight.

However, any fan of Beefy will be quick to inform you that one of the greatest punches in his arsenal is the right uppercut thrown at short range. A punch that he can throw like a corkscrew, smashing through is opponent’s defence and lifting the head, providing a target for his accurate thudding hooks much like Canelo. His selection of punching is varied and he rarely falls into the trap of throwing the same combination repeatedly, although he likes to throw several right handed shots that often confuses his opponent doing much damage in the process. An accurate straight puncher, Smith is unremitting when he has his opponent hurt and persists to pick his punches patiently and with generous force. Once his jab is established, Smith is likely to always find the target with the full variety of his punching arsenal.

These two fighters will undoubtedly be competing for the centre ring early. Canelo is arguably the better counter puncher of the two but Smith given the opportunity to act freely as aggressor will find his hard thumping success. Canelo’s tendency to offer his opponent the chance of landing a few licks, will allow Smith that opportunity to act as aggressor in the fight. However, Canelo after having fought Floyd Mayweather has picked up some of his defensive skills first hand, now commonly leaning back inside the pocket before firing a straight right hand as his opponent misses.

Alvarez has a quick jab too that he can follow up with a variety of accurate hooks or uppercuts. Smith will undoubtedly be bending at the waist, weaving away from punches thrown at him behind a tightly compact guard. Both fighters will utilise the ring instead of remaining motionless in across the ropes or in the centre as either one of them has the accuracy to hit a motionless target with ease. The jab from both fighters will be crucial to establish from the outset, as whoever can dictate the ebb and flow with their jab will find success soonest.

For Smith, his success in my view will come from his uppercuts and straight punches through the guard of Canelo but he will have to maintain a firm balance by sticking close to Canelo who may attempt to lean back towards the end of Smith’s salvo and counter over the top of the reaching glove. Canelo may attempt to box Smith early, but will likely be drawn into an inside fight as the proud Liverpudlian lands a slew of punches that echo around the AT&T Stadium in Texas to the gaping awes and vitriolic encourage of both fighter’s fans.

An opportunity for both fighters, this fight gives the platform to defend his WBO world light middleweight title against one of boxing’s most well-known fighters, and Canelo has the opportunity to take that belt with him only one fight after he vacated his WBC World middleweight strap.

You can watch the fight live on Boxnation via subscription on Saturday the 17th of September live from the AT&T Arena, Texas.