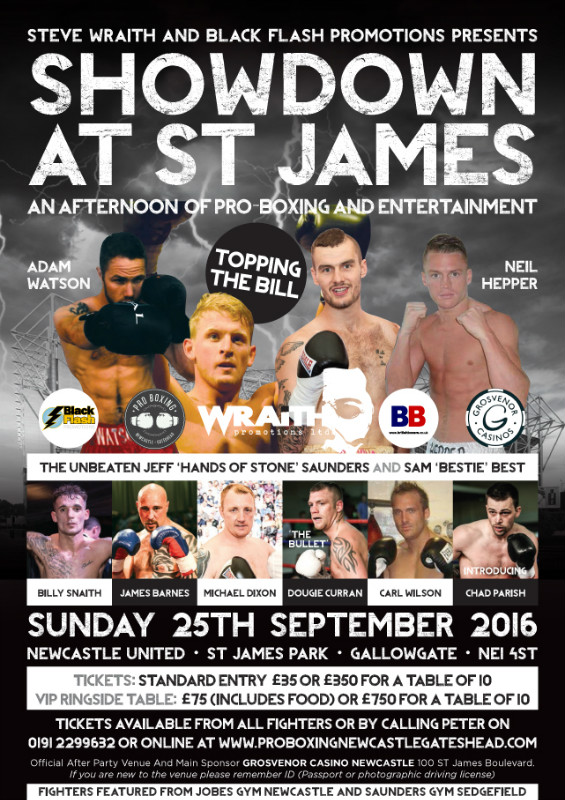 Manchester based Black Flash Promotions will promote their first show out of their home city when they team up with Northeast promoter Steve Wraith to bring ‘Showdown at St Jame’s’ – A professional boxing event at the home of Newcastle United Football Club on Sunday 25th September.

Black Flash are already associated with Jobes Gym in Newcastle and have been in discussions to work with them to promote the boxers from the gym. Wraith Promotion’s were already doing a show around the same time of Black Flash’s proposed show, so all parties decided it would be better all round to work together and make one big show with all the boxers fighting under the famous St Jame’s Park roof.

The show is to feature some of the rising pro’s in the region and promises to be a great afternoon of quality boxing. Black Flash have set their blue print over the last couple of years, bringing local Mancunian talents like Zelfa Barrett, Matthew Ryan and Sean Ben Mulligan to the forefront and attention of fight fans, giving them a platform to perform and get their careers off to a flying start, and they intend to do the same in Newcastle and other parts of the UK.

“Black Flash Promotions are about bringing through young fresh talent who have a desire to reach the top and work with us to get there the right way.” said Black Flash Promoter Pat Barrett, a former British and European champion.

“We are closely linked with the Jobes Boxing Club in Newcastle and the lads, Matty, Kevin and Tink, they are long-time friends and we have been discussing for a while now about promoting the new professionals from their gym and working in Newcastle.

“We have linked up with Steve Wraith for this show, me and Chris were happy to do that and it is a great thing for the local boxers, for the good of Newcastle boxing and it is a pleasure for us to be involved with, it is something that can only benefit professional boxing there. Steve has the same passion for his area and his boxers like we do with ours and we are looking forward to working with him on September 25th and hopefully in the future too.” added Barrett.

Steve Wraith is one of the leading promoters in the area and has already been investing in local talent and says he is delighted to be welcoming and working with Black Flash Promotions and promises fight fans in the region a great show.

“I’m delighted that, not only have we come to agreement on co-promotion with Black Flash Promotions, but to be able to welcome Matty Jobes and his fighters into the mix,” said Wraith.

“Discussions have been ongoing for a while now and, having finally got the chance to meet up and view the venue as one entity, has made the wait all the more worthwhile.

“I for one can’t wait to put on this show next month and I know that fight fans, not only in Newcastle but across the region, will want to come to this show.”

All the Black Flash Boxers from Manchester will be in attendance on the night in Newcastle and a few other special guests will be attendance on what promises to be a great Sunday afternoon of boxing at the famous football ground in the heart of the great city of Newcastle.

Tickets are available from the boxers or call Peter on: 0191 229 9632 or online at www.proboxingnewcastlegateshead.com

SMALL HALL BOXING IS BACK! CLIFTON MITCHELL AND JOHN DICKENSON INTRODUCE "BACK TO BUSINESS"

FIERY WEIGH IN AND FACE OFF: ZIANI V DILMAGHANI FOR THE EUROPEAN TITLE SATURDAY (HENNESSY SPORTS)

Previous ArticleMichael Conlan Interview from Rio: “I hope my reaction after the fight opens the eyes of the world to the corruption in amateur boxing.”
Next ArticleLiam Smith vs Canelo Alvarez and a tale of two brothers