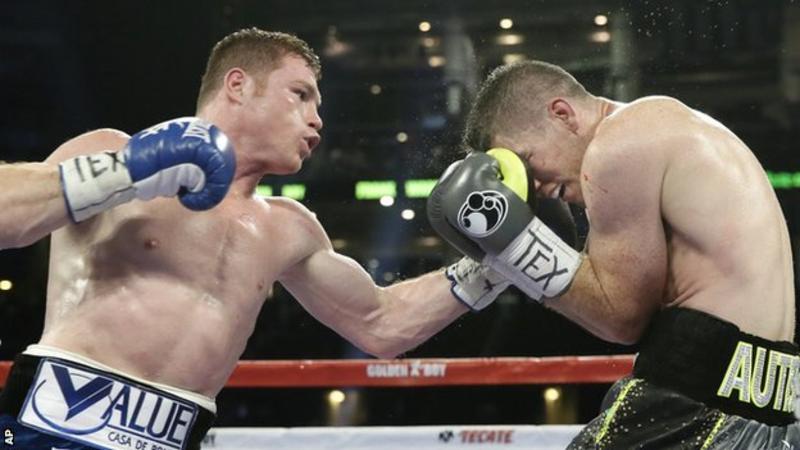 It was not to be for defending WBO light-middleweight titlist Liam “Beefy” Smith (23-1-1, 13 early), who went for glory at the AT&T Stadium, Texas last night only to fall short against challenger and boxing superstar Saul “Canelo” Alvarez (48-1-1, 34 KOs).

Smith was dropped three times en route to a ninth-round KO loss. Down in the seventh and eighth—from a right hand and left to the solar plexus respectively—a crunching left hook to the body put the defending title-holder away at 2:28 of the ninth as he failed to beat the count of referee Luis Pabon.

It was a hard night for the 28-year-old, who returns to Liverpool without his WBO crown. The former champion told HBO that he never felt comfortable despite hanging in there during the early-to-mid rounds.

“Canelo was too good today,” he admitted. “He was too cute for me to be honest. No excuses, but my timing was so off. I haven’t done much sparring. I couldn’t land anything clean and he was too good for me on the night.

“I was slow and had no timing to make him think twice—I thought I’d take over late. I never landed to to the body like I wanted to. He caught the body shots well and landed his own.”

“Liam Smith was a resilient fighter—he was tough and has a lot of heart,” said Alvarez when summing up the fight through an interpreter. “He thinks before he attacks. The body shot was what I focused on, making sure I worked his body down. That is what secured the victory today.”

He added: “I want to thank everybody. I told you I was going to give you a big fight. I started controlling him. Then in the second round I hurt my right hand so I had to use my left more often. I could only use my right hand sparingly.”

Despite a recent middleweight reign that saw him win the linear title, Alvarez insisted on operating at 155lbs for his win over then-holder Miguel Cotto (W12) and for his defence against Amir Khan (W KO 6). Questions remain, therefore, over the 26-year-old’s desire to tackle consensus 160lb kingpin Gennady Golovkin, who beat Kell Brook last week when the British boxer’s corner threw in the towel after five rounds.

Brook’s eye socket was damaged in that one, but he had moments of success against his rampaging foe. Canelo, though, told HBO’s Max Kellerman that the onus is on “GGG” to help make boxing’s biggest “Big drama show”.

A month ago, we offered him (GGG) three or four times as much to make the fight…He didn’t want to accept.”

“A month ago, we offered him three or four times as much to make the fight,” he said when asked if he is being protected by his promoter Oscar De La Hoya. “I didn’t want to say anything because I respect my rivals. He didn’t want to accept. I’m not going to blame my promoter or anyone else. I fear nobody. I’m 26-years-old. I’m the best at this moment in time.”

However, Golovkin took to Instagram to offer his take: ‘I didn’t expect that Smith punched so hard and that Canelo would talk that nonsense after the fight,’ he wrote.

Either way, the fight has to happen for the good of the sport, but we have been here before with Floyd Mayweather and Manny Pacquiao, who met when both were past their prime. Still, HBO really pushed the issue last night so there is hope that commonsense prevails and the two men meet at middleweight or even 155 to sort the issue out.