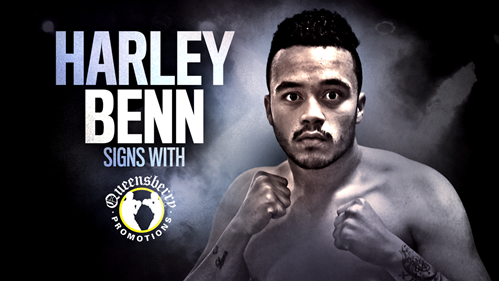 Harley Benn is delighted to have signed a three year promotional deal with Queensberry Promotions and will make his highly-anticipated debut on the WAM Boxing promotion taking place at the Brentwood Centre on November 25, live and exclusive on BoxNation.

The 20 year-old son of former two-weight World Champion and British boxing legend Nigel kicks off life in the paid ranks at Middleweight under the guidance of training duo Dominic Negus and Lenny Butcher at the Five Star ABC in Romford, Essex. Harley, from Hornchurch, will be managed by Hall of Fame promoter Frank Warren and is aiming to achieve big things in the fight game.

“This is my journey,” said Benn. “I’m not trying to follow in the footsteps of my dad; I’m doing this my way. However, I can definitely see similarities in the way we fight. I’m a come forward type of fighter and pack a big punch. I don’t like fighting on the back foot, I love a fight.

“I can’t wait to get in the ring and show people what I’m all about. I’m definitely more excited than nervous. Training has been going really well and I’m fitter than I’ve ever been. I’ve got just over a month til I fight and I’m going to be in the best shape of my life.

“BoxNation viewers should be expecting entertainment and plenty of bombs! They should be looking forward to some big knockout wins in the coming years and I know they will love my exciting brand of boxing.

“My trainer Domininc is like an older brother to me. I have such a good relationship with Dom and Lenny. I’m training alongside top Super-Featherweight Boy Jones Jnr and Sanjeev Sahota and we all get on really well. I spend more time with Dom and Lenny than I do with my own family; I’m always in the gym!

“It’s a brilliant show to be making my professional debut on. I’m a massive fan of Bradley Skeete; he’s one of my favourite boxers to watch. You’ve also got my gym mate Lee Markham on the bill defending his English Middleweight title and Boy Jones Jnr going for his first title so it should be a cracking night. I know a lot of people in Essex and they’ll all be there showing their support.

“Frank Warren and Queensberry Promotions were always my first choice. He’s developed so many World champions over the years so I know I’m in safe hands with him. Some of my favourite boxers have gone on to big things under the guidance of Frank and I know I can create my own success.”

Frank Warren added: “Harley has boxing in his blood but as he says; this is his career and he’s going to do things his way. His knockout power makes for an exciting fighting style that fans will love and he’s more than capable of mixing it up. Under the guidance of our team Harley can achieve big things but he won’t be rushed.”