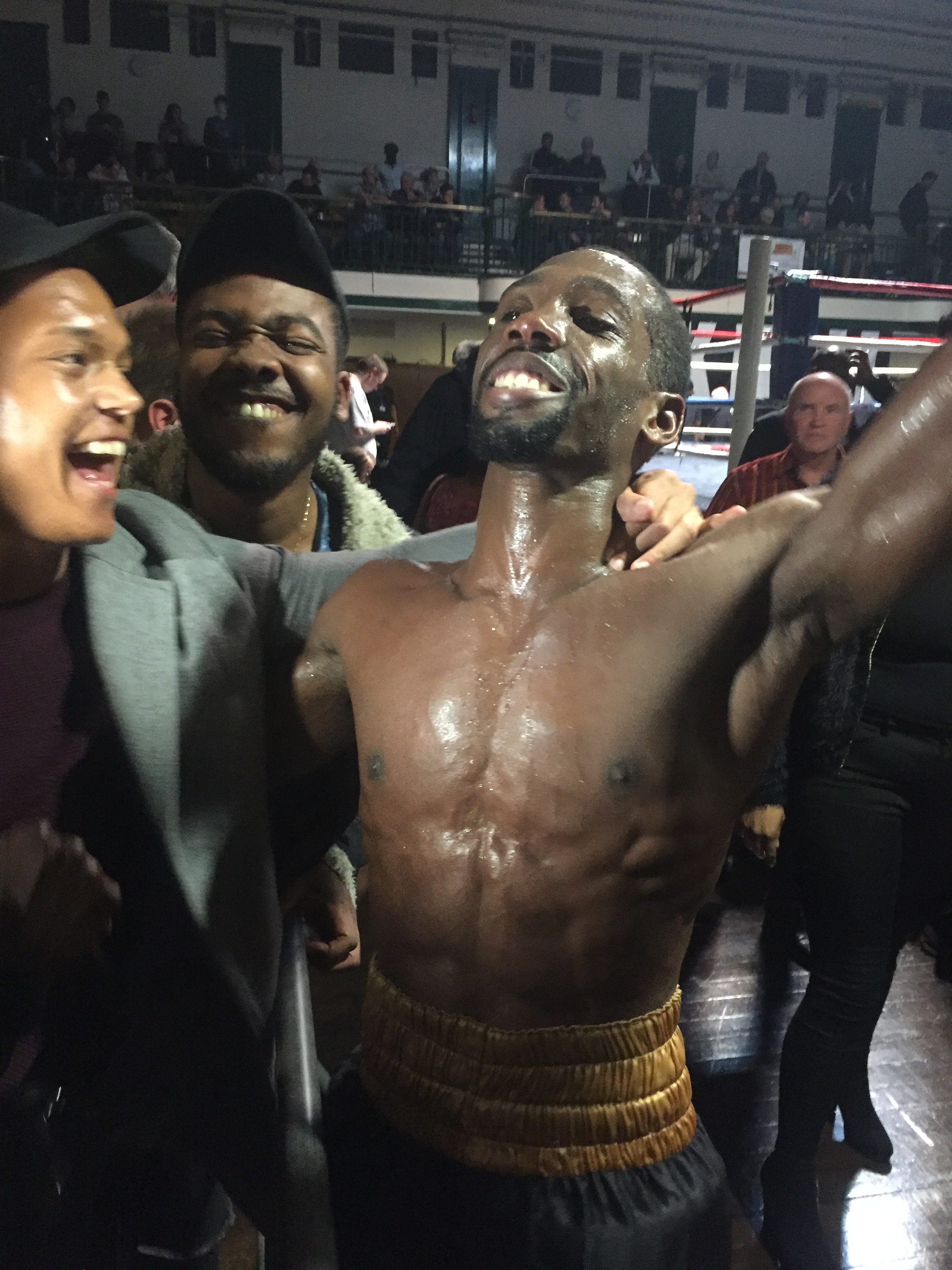 Both had good moments in the opener, with Noble looking to dictate the pace early and Prospere, an awkward switch-hitter, countering his advances from the back foot and finding success with good jabs, taking the round as a consequence.

By the third, however, Noble was beginning to see rewards for his high work rate, leading to excellent action in frantic toe-to-toe exchanges. Prospere actually looked the bigger man but wasn’t able to dissuade the champion from coming forward, having to hide behind his guard and pick shots from the ropes.

The fourth and fifth were also hotly contested back-and-forth affairs, with Noble doing the more eye-catching work to win them both. As the sixth round started, Prospere was on the back foot again, although now not by choice; Noble had begun to connect with telling punches and was advancing resolutely, throwing flurries of shots as he did so and hurting the challenger with hooks to the body. Prospere answered in kind, and another excellent shootout developed in the challenger’s corner as the bell rang to close the session, although Prospere certainly came off worse.

This seem to spend much of what he had left in the tank, with his work becoming scrappy by the ninth, and his brave but fruitless search for a knockout in the final round saw Noble, who was superb, retain his belt by a score of 98-93 in his favour. My card was a little wider at 99-91, but I wouldn’t begrudge Prospere a more generous share of the spoils after a fantastic showing for both men.

In the co-main event, cruiserweight hopeful Karl Wheeler narrowly won a decision over Ossie Jervier in the semi final of the Fascia and Glazing Supplies Ltd Fight Cup, a tournament similar to the popular Prizefighter on Sky Sports, with a cash prize and a guaranteed shot at an Area title going to the eventual winner. After a tight first round, the action started in earnest in the following session with Jervier, the smaller man, choosing to circle and then rush his opponent, hoping to land meaningful shots on the way in. This seemed to work, earning him the second round and putting Wheeler in trouble in the third, where he was forced to take a knee after good work to the body. He was down again in the fourth, after a right uppercut went through his guard, but Jervier couldn’t find the finishing touch, and Wheeler managed to see the round out.

The fifth round may have been the best of the night, with Wheeler, having recovered from earlier punishment, weathering another storm to put Jervier down with an uppercut of his own. Jervier, from Willesden, was stunned by the shot, and he was made to cover up under a barrage of shots from Wheeler, who looked to capitalise on the sudden shift in fortune. Jervier rallied in the sixth but was beginning to tire, and with Wheeler’s sudden discovery that he could actually box, found himself at the mercy of Wheeler’s body shots and good counter-left hooks in the seventh. Wheeler took the remaining rounds bar the final, where Jervier looked to impress with a strong finish. Referee Lee Cook scored the contest 94-93 to Wheeler, much to Jervier’s disgust. I had the fight a 94-94 draw after calling the first round even.

Jordan Dennis opened his professional account with a stoppage win over Jozsef Takacs. Better in all departments, Dennis had his man outmanoeuvred from the opening bell, eventually dropping the Hungarian with a body shot in the third. He rose from the canvas but was stopped on his feet after several combinations went unanswered. It had been scheduled for four.

Adam Dingsdale, who has only lost to very good domestic opponents, staked his claim to mix with them again after outpointing rugged regular Michael Mooney over six. Mooney, on his night, can provide tough work for some but Dingsdale, by boxing sensibly, avoided a gunfight and took the win without taking too much punishment along with it. More like this should see him higher up the fight order before too long.

Points wins for Abraham Horner and Billy Joe Graham saw them continue their boxing apprenticeships, Horner against tough Bulgarian Stanislav Nenkov and Graham against fellow debutant Edward French. Graham will look to stay active with another fight wither late this year or early 2017, while Horner moves to 4-0 and might seek a sterner test in the not too distant future.

Potential prospect Linus Udofia enjoyed his first knockout over Teodor Lozanov to move to 3-0, while Jimmy Cooper, also earning his first knockout, moved to 3-0-1 after stopping Balaz Bajkai in the first round. He stays busy with another outing on 12th December in Portsmouth. Chris Davies also moved to 3-0 after a unanimous points win over journeyman Tamas Danko. A routine victory with boxing ability proving to be the difference between them, although the Hungarian was coming off a win last time out.