I was there. Irish eyes were smiling 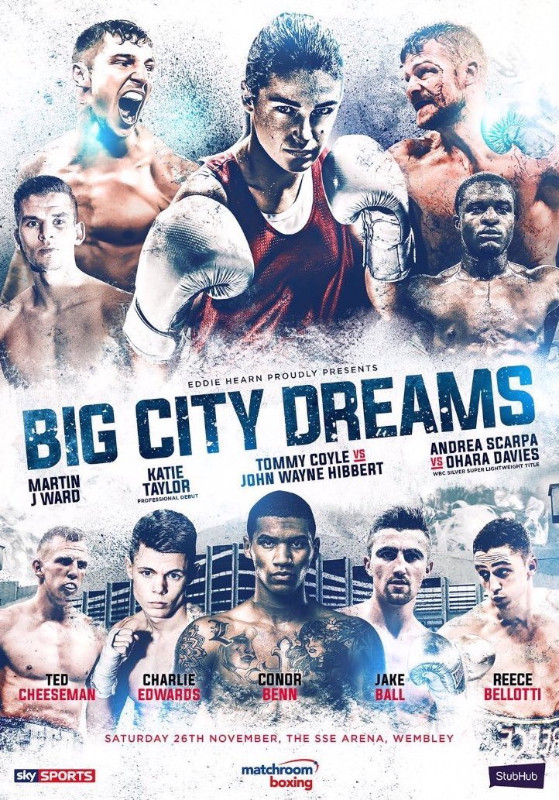 ‘I was there moments’ are a subjective feast. In years to come the half-full Big City Dreams Matchroom Promotion at Wembley Arena that bore witness to the professional debut of Katie Taylor, the Irish attraction recorded a terrifying three round demolition of gutsy Pole, Karina Kopinska, will eventually burst at the seams with those who will claim they were there too.

So I know there was a guy on the front row who fell asleep in the subsequent bout, legs crossed and stretched, as if at home following a hearty Sunday roast. Only the inadvertent elbow of his neighbour, a security guard of white polo shirt rank, massaging his own cramping calves, presumably from a lengthy ‘leg’ morning, woke the VIP from his slumber.

Between rounds our snoozer guzzled at the bottle Coca-Cola mixed earlier and galvanised himself for the championship minutes of Ohara Davies versus Andrea ‘He refused to’ Scarpa. It was a fight that demanded caffeine.

Davies has enjoyed attention of late. While there will be growth from the twelve rounds he navigated, it was hard not to wonder what the ringside Dark Destroyer would have done to the awkward Italian. With his distinctive beaked proboscis he boxed with the look of a man opening somebody else’s dustbin and blinked prodigiously when the Hackney man did land a blow. After consideration I felt it may have gone five rounds, but then Nigel Benn is 53 after Christmas.

Three judges, one of whom may have been the observer who stopped Jake Ball falling head first on his lap earlier in the evening, appeared to round up to a 120-108 on all of their cards to save the announcer time. It wasn’t quite that fight and Davies has much to work on.

Popular pair Ben Hall and Jake Ball were both undone, Ball spectacularly so. A statuesque specimen, Ball’s facial hair exaggerates a chin Irishman JJ McDonagh found with ease and encouraged memories of Brian London or Tango and Cash, subject to your generation.

I don’t know what Spencer Oliver, who was working for Sky at ringside made of it. But if pushed I could guess.

Visiting American, Carson Jones added some know how to the bill, too much for Chadwel Heath’s Ben Hall who couldn’t discourage a motivated visitor. There was an inevitability about the outcome despite early success for young Hall, who had all the t-shirts, the ring walk but not the power he needed. A right hand injury, he clearly grimaced every time he landed it, removed any hope of a once in a lifetime type shot to save him from the remorseless veteran.

A corner towel arrived eventually, five minutes after promoter Eddie Hearn had encouraged the corner to call it a day.

Hall commented in post fight on how he’s overcome a lot in his life. I suspect Carson Jones, if the American’s willingness to return manifests in a rematch, will never be added to the list. Hall showed balls mind you. Sorry mother but he did.

Beyond Taylor, who brought a brooding menace to proceedings, not to mention that rarely seen phenomenon in this era of high shorts, the belly button, it was Reece Bellotti, who delivered a performance of maturity and authority, that caught the eye.

Few neutralise Slough’s Ian Bailey so completely, and it was an example of the wisdom of his corner that he was saved from his own courage at the end of the seventh. Bellotti, a two time ABA champion, has a future. One I’ll follow.

Much has changed at ringside since my last visit, a woman debutant headlined, in all but name, there were more sockets for my earnest younger contemporaries and those who typed; “There can never have been a debut to compare…” before Taylor had her gloves on.

But, reassuringly for this traditionalist at least, much remained untouched. Ragamuffin man still wears shades indoors, Ron Bodie still prefers to stand, Darren Barker still has the hair of a matinee idol and an idiot threw a bottle from the balcony.

On a final note, it still feels too soon for anyone to use Lyrical Gangster as their entrance music by the way. The Morris dancer I saw as I drove home, with his tankard in hand, calves jingling, would have agreed. Had I stopped to ask him.