AJ – A year to remember 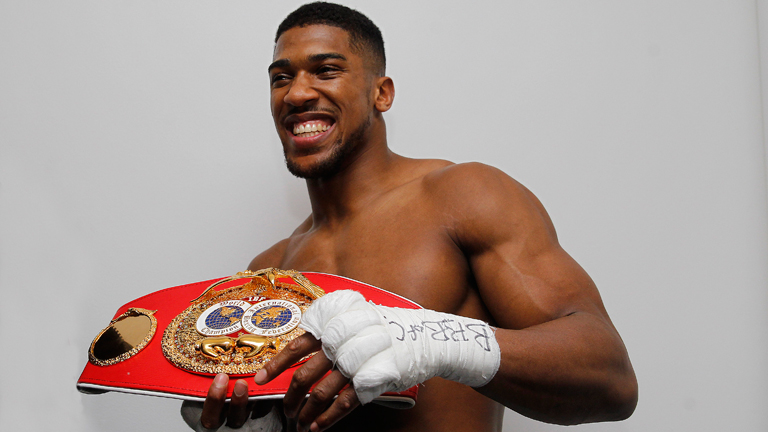 Anthony Joshua MBE has had a year to remember. Let’s have a look back on his achievements and see what 2017 has in store for the 27-year-old Watford heavyweight and 2012 Olympic gold medalist.

He came into the year as British and Commonwealth champion but with American Charles Martin being the newly crowned IBF world champion in January , Joshua’s promoter Eddie Hearn smelt weakness and put his money were his mouth is and on 09/04/2016 ‘Prince’ Charles travelled to British soil to defend his crown.  The ‘Prince’ crumbled in 2 rounds as British boxing crowned its new King.

American Martin looked more club-fighter than world champion, and left Londons O2 Arena with his tail between his legs and a bagful of cash , and will go down in history as one of the modern eras worst heavyweight world champions. But British boxing had unearthed a superstar.

Two defences of the crown followed in the year for AJ. Both against overmatched and underwhelming American opposition. In June Dominic Breazeale showed resistance before succumbing to a 7th round TKO in a one sided bludgeoning. Then on December 10th Eric Molina resembled a rabbit in the headlights as he tried to avoid the marauding AJ before being stopped in 3 one sided rounds.

AJ became big business. All three of his fights in the year aired on PPV platform Sky Box Office. Despite fans complaining about the quality of opposition the numbers look impressive. American TV also got onboard with Showtime picking up his fights making him a boxing star both sides of the Atlantic and paving the way for a future fight stateside.

His first fight in 2017 has already been announced, and it’s a big one. On 29/04 he will face Wladimir Klitschko at Wembley Stadium in front of Ninety-Thousand people and many more tuning in on Sky Sports Box Office. As well as his IBF title he can also add the WBA Super and IBO belts if he beats the man who’s ruled the division over the past decade. Boxing history is littered with the passing of the flame especially in the Heavyweight division. Be it Rocky Marciano beating Joe Louis or Larry Holmes providing a beatdown to a over-the-hill Muhammad Ali and Aprils encounter could provide another moment to add to the list.

Tyson Fury showed last November that Father Time may have caught up with Wlad ‘Dr Steelhammer’ Klitschko when Fury outboxed and bamboozled him to a points decision. Joshua may get the job done in a more impressive fashion. If he were to knock out the 40-year-old Kiev resident he would leave no doubt as to who the best heavyweight on the planet is.

Not only is Joshua building a boxing legacy he is also building a brand. With good looks and a clear admiration from today’s youth he is a advertisers dream. And he could become boxings equivalent in popularity terms to David Beckham before 2017 is out.