Nathan Clarke Inspired By Stablemates ahead of ring return 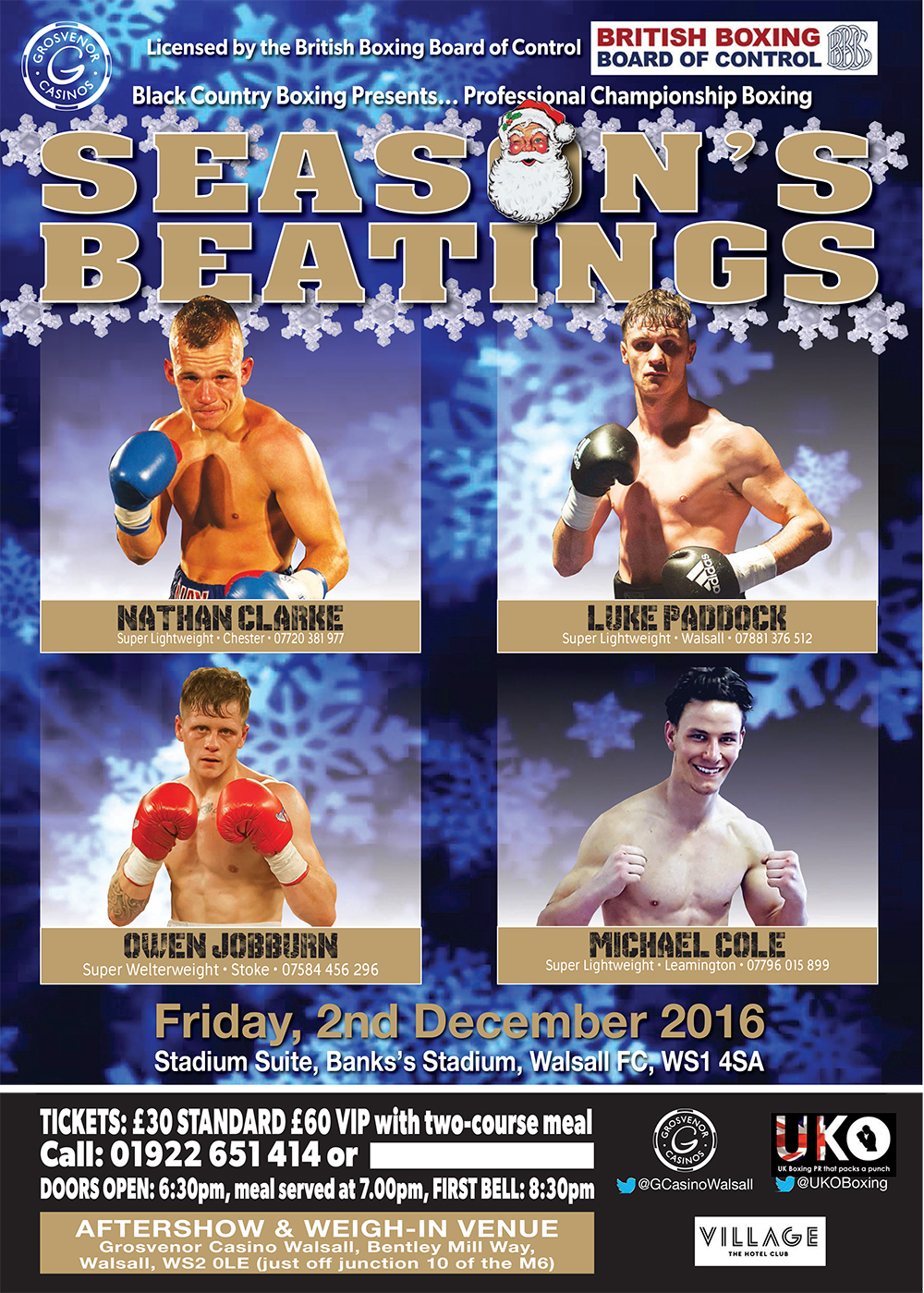 Nathan Clarke has taken inspiration from stablemates Andy Keates and Kieron McLaren as he looks to get his professional career back on track writes James Eley.

The Chester welterweight hasn’t fought for two years but he believes everything is now in place to make a fresh start, beginning with Black Country Boxing’s ‘Season’s Beatings’ show, sponsored by Grosvenor Casino Walsall, at the Banks’s Stadium, this evening.

“Everyone expects a title but I have spent so much time with Andy Keates in the gym and I have seen what he has achieved and I am with Nathan Gorman and Kieron McLaren nearly every day and that gives me a hunger to follow them,” he told uko-boxing.com. “Seeing what they have moved on to is great and if I could get to where Kieron is now then I would be happy with that. I will never settle but that is my goal, you have to take little steps at a time.”

The 26-year-old wanted to make his come-back at the beginning of October on Hatton Boxing’s Stoke show but the small matter of his wedding forced him to wait until this evening for his ring return. Clarke made his debut in 2011 but has only fought three times since, however he has won his last two contests and he is confident of fighting regularly from now on.

“I got married eight weeks ago so I have been very busy. I wanted to be on the Hatton show in Stoke but it was five days before my wedding and my wife was flat out against it. I was going to do it anyway but my coach said he wouldn’t let me so I have waited until now to get back.

“This fight is to get me back in there and it gives me something to focus on and something to build on and it will let everybody know that I am still there. I am always training and I am always still in the gym and hopefully I will take it all in my stride. If I keep busy after this then brilliant, that is a starting point to build on.

“I was struggling with my right hand straight after my last fight. Eventually I went and got it X-rayed and it showed that I had a little fracture in it. So I just wanted to take some time off and recover from that.

“But I have also been busy, I run an amateur boxing club so I have been busy with that and then I got married so things have been getting in the way but things are now in place to start again now the hand is recovered.

“Once I am out and boxing I want to keep doing it, I have had a very stuttered pro start but I want to keep busy now and keep my mind on it so I am not getting distracted by other things and I can focus on myself. Hopefully I will be able to do that. We will see how this fight goes and I won’t take anything for granted and as long as I box well I will be happy. Then I want to enjoy Christmas and keep the runs up and just stay in the gym.”

Clarke is joined on ‘Season’s Beating’s’ by Walsall’s Luke Paddock, Stoke’s Owen Jobburn and Leamington’s Michael Cole. VIP tickets have sold out but standard unreserved tickets can be purchased on the door at £30. Doors open at 7.30pm with boxing commencing at 9.30pm at the Stadium Suite, Banks’s Stadium, home of Walsall FC.

The aftershow takes place at Grosvenor Casino Walsall, Bentley Mill Way, Walsall WS2 0LE (just off junction 10 of the M6). Grosvenor Casino Walsall will have a presence at the football club on the evening and have linked up with local taxi firm, Yellow Taxi’s, to supply a number of free taxi’s to take guests from the Banks’s Stadium to the casino post-fight.