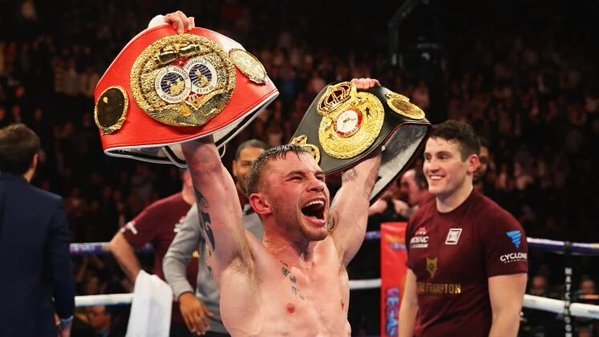 World champions Carl Frampton and Lee Selby are on collision course if both come through their tough assignments in Las Vegas on Saturday night.

WBA featherweight world champion Frampton (23-0, 14KOs) says he would welcome a world title unification clash with IBF ruler Selby in Belfast this summer if he prevails in his rematch against former champion Leo Santa Cruz, and Selby comes through his title defence against Jonathan Victor Barros (41-4-1, 22KOs) on the same MGM Grand Arena Card in Sin City.

Selby (23-1, 8KOs) is also equally as happy to entertain a unification scrap and doesn’t mind it being on “The Jackal’s” turf. It would be a massive fight and one that would certainly whet the appetite of all fight fans should it transpire.

Two-weight world title holder Frampton, 29, overcame Santa Cruz (32-1-1, 18KOs) in one of the fights of last year to claim the WBA ‘super’ title at featherweight after moving up from super-bantamweight in July and the pair will go at it again in what is expected to be just as bit as good a fight as the first one.

Asked what he thinks about a possible Selby match-up at Windsor Park, the confident Frampton said he has a lot of respect for Selby, but is happy to face him after he deals with Santa Cruz. “I think that’s a huge fight,” said Frampton.

“It’s appealing to the boxing public, especially in the UK. Maybe not so much in the States, but it’s a big fight in this part of the world.

“I believe, although Lee has been more established as a featherweight, and he’s had a few defences of his title, I believe I’m the draw in that fight. I’m the one that sells the tickets and if the fight is going to happen, it happens on our terms and happens in Belfast.

“If he’s willing to come to Belfast and have a unification fight with me in the summer after I beat Santa Cruz, then I’m happy to have it.”

“He’s a very good fighter, he’s someone who I have talked about a lot and I respect him,

“I think him and his brother Andrew are two of the most skilful fighters in the UK, but I just want to be involved in these big fights.

“I want to have three fights this year and a fight with Selby at Windsor would be perfect. He’s a fighter that I have always respected and I think it would be a huge fight, two World champions from the UK unifying the belts.”

“I’m 30 next month so from now to the end of my career I want to be in really big fights and Selby is a big fight,” added Frampton.

And Selby, 29, insists he would have no second thoughts about taking on Frampton on his home patch and would indeed relish a trip to Belfast to take his fellow world champion. The Barry boxer has fought in the Northern Irish capital city before when he outpointed Martin Lindsay at the Odyssey Arena in defence of his British and Commonwealth straps in 2013. That fight was actually on the same card as Frampton, and it was a pleasant experience for him.

“Belfast is okay for me,” said Selby. “I’ve boxed there before and it was one of the best experiences I’ve had. I was boxing in a great venue and they are all boxing people.

“I remember walking in and everyone was booing me, swearing at me all the way to the ring, but when I boxed my way to the win, they gave me a standing ovation on my way back.

“It will be a super fight, but I do think British boxing fans will demand it anyway—as long as I win on Saturday.”

Carl Frampton’s rematch against Leo Santa Cruz and Lee Selby’s IBF title defence against Jonathan Victor Barros in Las Vegas, will be shown live on Sky Sports 1, from 1am.