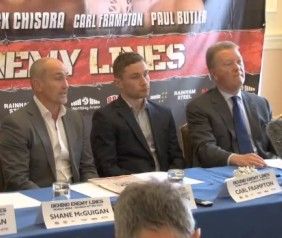 It is understood the decision follows a decision by Barry McGuigan, Frampton’s manager, to be a joint promoter.

On Thursday, Matchroom Sport and Eddie Hearn said they felt that such a relationship with McGuigan would cause a potential conflict.

Framtpon has agreed a new deal with Frank Warren in terms of future fight promotions, which will include McGuigan as a joint promoter and his next fight will feature on the Frank Warren promoted show ‘Behind Enemy lines’ which takes place at Wembley Arena on July 20th.