Frank Warren: “Nicola Adams has won me around to women’s boxing! 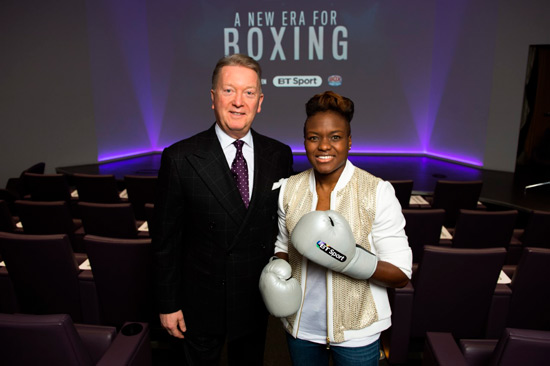 As many fight fans I no doubt will recall, I have in the past not been a huge advocate of women’s boxing or displayed any great enthusiasm for promoting the female game.

I am not going to be a hypocrite or attempt to rewrite history, but my thought process at the time mostly revolved around the fact that there wasn’t any great depth or quality in the women’s ranks.

I make no bones about it, I wasn’t a convert and didn’t particularly believe it to be a marketable product.

Now you could say I have had my head turned and seen the light. I am a convert, The brilliant Nicola Adams has shown me the road to Damascus – or, if you like, the Manchester Arena on April 8.

It is difficult not to when you are in the company of our great new signing because she lights up the room with her beaming smile and captivating personality.

Her exploits in becoming a world, European, Commonwealth and double Olympic champion – and, let’s be honest, currently the undisputed best female fighter in the business – have won me over in a big way and I am absolutely thrilled Nicola has chosen to join us on BoxNation’s forthcoming tandem ride with BT Sport.

As I mentioned at Nicola’s unveiling at the BT Tower on Monday, I have had to eat double helpings of humble pie given my previous uttering’s, but I am more than happy to have done so.

The 34-year-old is a crossover star with massive appeal and probably one of the most recognisable sports personalities in the country.

She possesses the talent and character to propel women’s boxing to unchartered levels and help it to become a mainstream attraction.

It is not all about gender, however, Nicola is simply a bloody good boxer whose presence on the card would enhance any fight night and that is why we beat off considerable competition to be in position to showcase her on our shows.

Our job is also to help her realise her ambitions in seeking to become a multi-weight world champion and I don’t envisage this being a particularly lengthy process.

She is that good.

I fully expect her to become at least as popular in this country as Katie Taylor is in Ireland and that could already be the case, given the profile she has built up during her Olympic exploits that were broadcast by the BBC.

I have an exclusive platform on BT and BoxNation that will launch Nicola’s professional journey and, to my mind, she couldn’t be in a better place.

I am really looking forward to Nicola making her professional debut on our massive card at the Manchester Arena on what will be the opening night for BT Sport’s boxing package on April 8.

It will then be home sweet home when she co-headlines at the First Direct Arena in Leeds alongside Josh Warrington on May 13.

Hopefully, for my part, I won’t be in need of a dose of Rennie after polishing off all that humble pie.