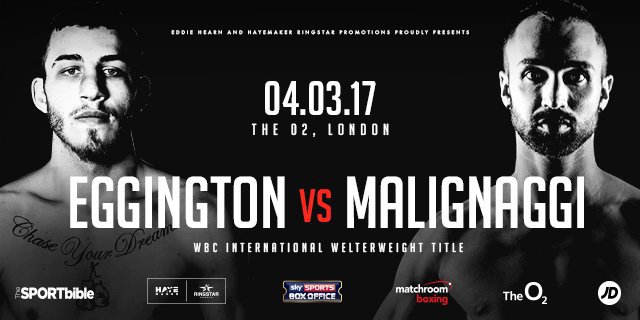 With the highly anticipated fight between David Haye and Tony Bellew just around the corner, we look at two of the fighters on the undercard that will be going toe to toe on what is set to be an electrifying night.

Sam Eggington will meet Paul Malignaggi at the O2 Arena to fight it out for the WBC International Welterweight Championship. Fans are conflicted as to whether Sam’s youth and heart will be the driving force to beat Malignaggi, or if the 36-year-old from Brooklyn is in favour for his experience and ability as a boxer.

That’s not to say that Eggington is inexperienced. His record of 11 KO’s in 19 wins is impressive and, since his last loss against Bradley Skeete, he seems to have upped his game. A lot of people consider Sam to be a “Brawler” rather than a “Boxer”, but Skeete said himself that he always knew that Sam could box and showed him as much on the night of their fight, despite Skeete being victorious.

The Birmingham born 23-year-old never set out to become famous in the world of boxing, but to work as a journeyman to earn a living. His talents in the ring were soon recognised and he began to build on his career as a professional boxer. With Eggington’s professional debut only being in September 2012, he has fought hard and fast to get to where he is today and the opportunity to fight someone of Malignaggi’s experience must be too tempting to refuse.

Paul “Magic Man” Malignaggi grew up in Brooklyn with his Sicilian immigrant parents. Sadly, his father abandoned him at the age of six and moved back to his home country. He regarded himself as a troubled teenager and was on the wrong path in life before finding boxing. Malignaggi started his professional career with his debut in July 2001 and has had some incredible opponents since.

Malignaggi has been in the ring with some of the biggest names of the last 10 years, with likes of Danny Garcia, Shawn Porter, Amir Khan and Ricky Hatton appearing on his resume. Many of them have gone on to do greater things than the boy from Brooklyn and it could be argued that if Eggington beats him this Saturday, it could be the end of the line for Malignaggi. It is clear to see that Malignaggi has gained more of the experience and knowledge of the sport than that of his impending opponent, but is that enough?

Malignaggi believes that there is nothing that Eggington can bring to the ring that he hasn’t seen before. His past opponents have been “better, bigger, stronger and faster than him” in his eyes. He does however acknowledge that a fighter with youth on his side like Sam will try to “bury you in activity”. So maybe Eggington’s work rate will be his advantage; that and his undeniable ability to take a punch.

Eggington is known for letting his guard down to entice more technical boxers, like Malignaggi, into having a fight, knowing he has the chin to take a few – although, if both boxers get into a brawl, they have both been known to get caught out.

The fight will have fans divided, but it looks like the odds are on Sam Eggington to win. This may be the start of amazing things to come for the lad from Birmingham. I believe that his youth and stamina could have Malignaggi burnt out within a few rounds……but we shall see.