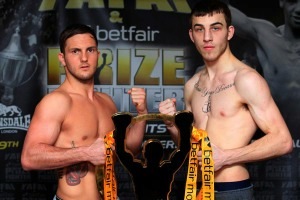 Sam Eggington wants to celebrate his birthday by taking revenge on Dale Evans and successfully defending his British and Commonwealth Welterweight titles at the Barclaycard Arena in Birmingham on Saturday night, live on Sky Sports.

‘The Savage’ turned 22 today (October 15) and the first defence of his British strap – second of the Commonwealth – represents the chance to level the score with the Welshman who beat him in the quarter-finals of Prizefighter on Wolverhampton in January 2013.

“I was just a kid in the first fight with Dale,” said Eggington. “I wasn’t used to making weight and I had never been on TV – so it was all a blur. I couldn’t have done any more on the night, he was the better man then, but that was a long time ago and a lot has changed since.

“Dale can whack and he’s going to be dangerous as long as he’s in there, so I know I have to be on my guard. I like a scrap and so does he, so it’s bound to be a good fight. Credit to Dale for taking the chance, not many people would take this size of fight at late notice but that’s the kind of guy Dale is, he’s a proper man and a tough fighter.”

With promoter Eddie Hearn in Chicago for Nathan Cleverly’s clash with Andrzej Fonfara in the early hours of Saturday morning, Eddie’s father Barry will be front and centre in the second city – and Eggington still cannot believe the support he’s received from the Hall of Fame promoter.

“It’s amazing,” said Eggington. “Barry has told me a few times: ‘Every boxer in the country wants to be in your position.’ They’ve got loads of great fighters at Matchroom, but no-one is Barry Hearn’s project. He said: ‘That’s you. Put the work in, and we’ll have a good go.’ I’m lucky. I didn’t expect to win the Midlands Area title, never mind being here.

“When we are in the office and we are talking, and he’s saying all these things, I don’t really take it all in. It’s not until we are on the motorway on the way home and I realise he is actually talking about me when he says all these things. It takes a while, but when it does sink in it makes me do that bit more in the gym and pushes me harder.”

Eggington’s clash with Evans is part of a huge night of action in Birmingham as Matthew Macklin returns to Super Welterweight and takes on Jason Welborn for the vacant WBC International title.

Kal Yafai meets Jason Cunningham for the vacant British Super Flyweight title and Kal’s unbeaten younger brother Gamal faces the most important fight of his blossoming career in a final eliminator for the Commonwealth Super Bantamweight title against Nasibu Ramadhani.