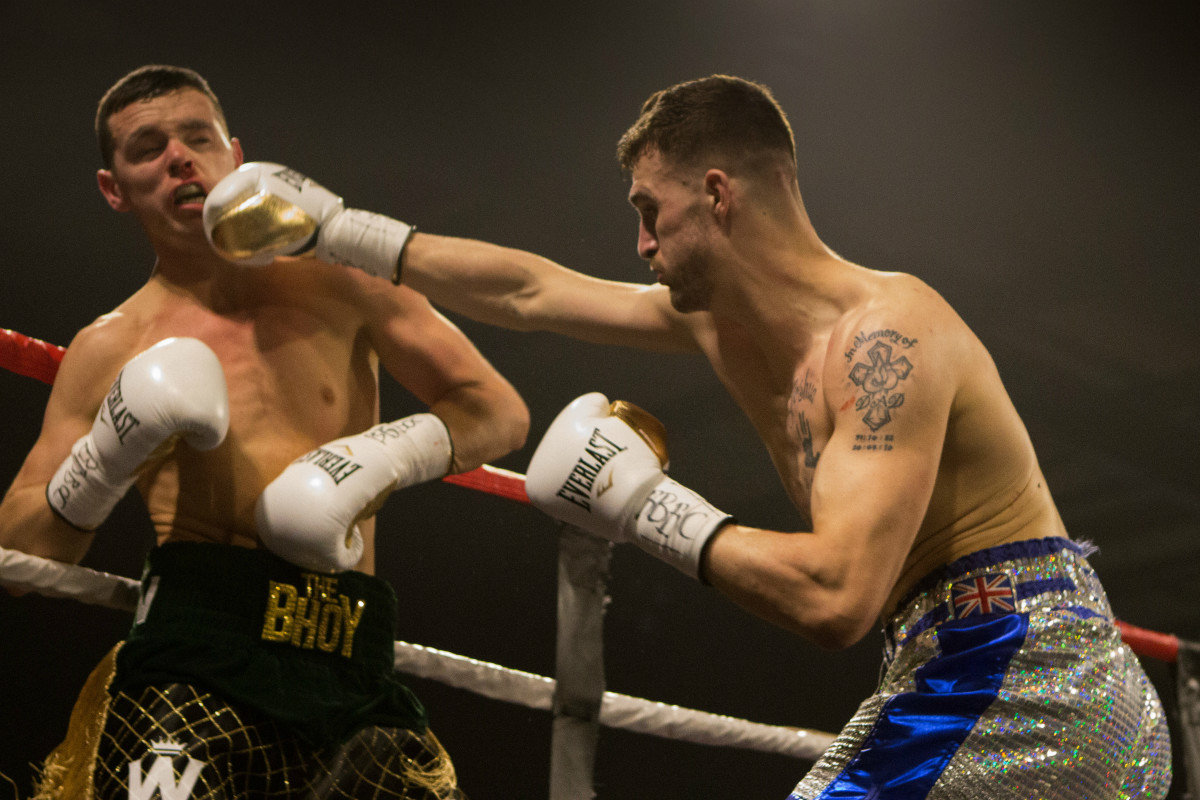 On a busy weekend for British boxing, that saw Anthony Crolla take on Jorge Linares for the WBA light-weight title, (Read Crolla-Linares II fight report here) this Black Flash show in the familiar surroundings of the Bowlers, certainly offered more than just an appetite builder for boxing fans anticipating Saturday’s big event down the road.

Billed as a great fight card, showcasing young upcoming talent from the Northwest and beyond, as well as featuring the English light-middleweight championship bout between Matty Ryan and Sonny Upton, this show once again proved that you have to look no further than your local promotions to experience a night of quality boxing.

The night’s main event was an intriguing contest, not only due to the late change of opponent, with the injured Macaulay McGowan replaced by Sonny Upton– an altogether different type of fighter. Even so, Matty Ryan looked ready and well prepared for this, as were his support- and together with the Upton Clan they were generating a great atmosphere at the Bowlers.

From the first-round onwards, it seemed fairly clear that this fight was going to follow the pattern set by the contrasting styles of the two fighters: Matty Ryan would stalk Upton, who seemed comfortable fighting on the back foot and in the corners, utilizing some nifty head movement to set up his counter punches.

This game of cat and mouse continued throughout the next three or four rounds, with Ryan constantly looking for an opening and Upton looking to react to any mistakes made by Ryan. Into the fourth round it seemed like Upton’s plan was beginning to work, with Ryan displaying an impressive and positive work-rate, but finding little penetration for his punches.

Ryan picked up his game in the 5th, 6th and 7th rounds, however, connecting with some solid right crosses, as Upton allowed, at times, to let his hands drop. He seemed to find a second wind from somewhere for the final two rounds, which were very evenly contested, with some entertaining boxing on show from both fighters.

It was tense moments, then, for all, as this contest for the English super-welter title went the distance. The three judges scored it 97-93/96-96/96-95 respectively- and the place erupted as Matty Ryan was announced as the winner and English Champion. It was clear to see from the reactions of Ryan’s corner what this title meant, with trainers Pat Barrett and Paulie DaSilva embracing their man proudly.