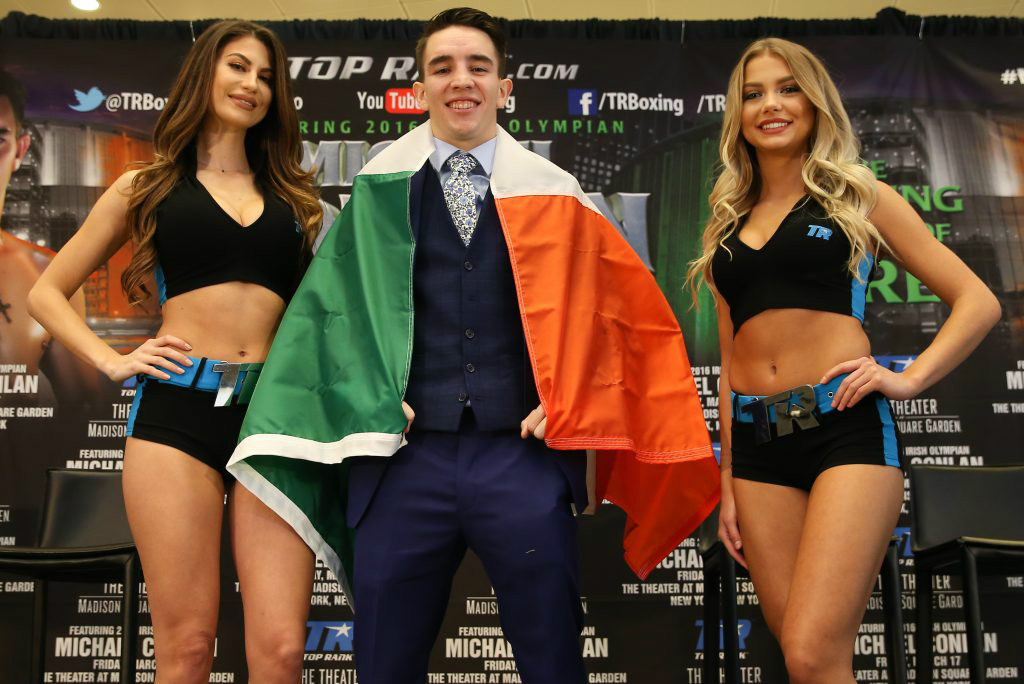 This Friday, March 17th, Michael Conlan makes his professional debut at The Theatre, in the famous Madison Square Garden in New York . Conlan will be topping the bill at the widely regarded ‘Mecca’ of boxing and feels it’s a true honour to have his pro-debut in such an iconic location. Additionally, March 17th happens to be Saint Patricks Day and he says that to him, a native to Belfast, Northern Ireland, “It’s special…I am truly grateful for the opportunity”.

Michael entered the world of boxing at seven years old and hasn’t looked back since. His superb amateur career has seen him win numerous titles from all corners of the world and was ranked number one in the IABA Bantamweight division.

In 2012, he secured Bronze at the London Summer Olympics as a Flyweight and the following year he went on to achieve a Silver medal in the European Championship in Minsk, Belarus. In 2014 Conlan moved up to Bantamweight and he was victorious with Gold at the Commonwealth Games in Glasgow, Scotland.

Bantamweight obviously sat more comfortably with Conlan, because in 2015 he took a Gold Medal home from the World Amateur Championships in Doha, Qatar and a Gold from the European Championship in Samokov, Bulgaria.

In 2016, he represented Ireland in the Summer Olympics in Rio de Janeiro. He looked promising until he lost to Vladimir Nikitin, from Russia, after a unanimous decision from the judges. Conlan was clearly outraged by the decision and publicly aired his view on the integrity of Amateur Boxing. Many were supportive of his actions and he had high profiles in the sport questioning the AIBA.

There and then, Conlan knew that he was destined for greater things. He signed with Top Rank and late last year his promoter, Bob Arum, made the announcement of his professional debut in 2017 at The Theatre at Madison Square Garden.

“I’m honoured and privileged to make my professional boxing debut in the Mecca of Boxing that is Madison Square Garden, fighting in the world’s most famous arena in my professional debut on St. Patrick’s Day. It is something I never dreamed would be possible,” said Conlan at the press conference in New York this week.

“But thanks to my team and Top Rank, it’s happening.  I’m truly grateful for the opportunity and I hope to make St Paddy’s Day Weekend at The Garden an annual event!  I have the hopes of a nation behind me and I can’t wait to go out and put on a performance for Ireland on St Patrick’s Day!”

Conlan’s opponent, Tim Ibarra (4-4,1KO), is confident that he has the upper hand with his experience. The increase in the rounds; lack of headgear and smaller gloves, has him claim “this is my territory”. Although most view Conlan as favourite to win, 26-year-old Ibarra sees him as just “another man in the ring”. He doesn’t acknowledge any of Conlan’s amateur highlights as being relevant to the professional game and says “I’m ready for a war”.

Colorado based fighter, Ibarra, lost his last fight to Jose Gonzalez (6-0, 2KOs) at the 2300 Arena in Philadelphia. The two fighters were well matched for the bout, both being in the early days of their professional careers, however the points on the judges’ score cards were in favour of the New Yorker, Gonzalez.

Ibarra led a troubled youth before finding boxing, saying “I didn’t wanna live the same life I was living…inside of jail cells…really didn’t like that life”. Although his professional career clearly means a lot to him, Ibarra appears to be very relaxed in his approach to his upcoming fight with Conlan.

After his Olympic trial in 2008, Ibarra says he didn’t do much until turning professional in 2012. Now he is faced with a highly-viewed fight at one of the most notorious locations in boxing, he says that he “couldn’t be more blessed and grateful for this opportunity”.

Some may think that Conlan revealed his emotions in the aftermath of the 2016 Olympics and that this may be his downfall on Friday night. Ibarra and his team are keen to “catch him when he’s slipping” and “if he gets hot headed and starts making mistakes – we will capitalize on all those mistakes”.

The best of luck goes to both fighters, however I think that Conlan should be able to get Ibarra out of there in the second half of the bout.