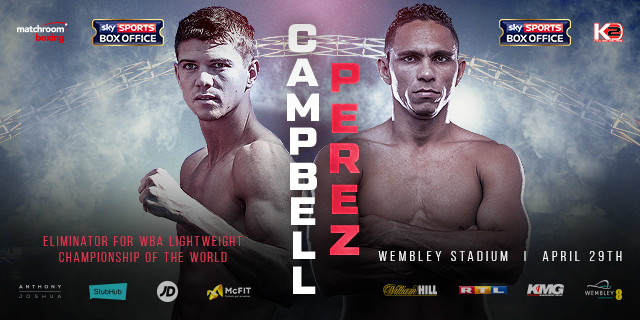 Luke Campbell MBE will face Darleys Perez in an eliminator for the number one position for the WBA World Lightweight title at Wembley Stadium Connected by EE on April 29, live on Sky Sports Box Office.

Campbell defended his WBC Silver title for the second time in February with a second round demolition of Jairo Lopez in his hometown of Hull, following hot on the heels of his impressive stoppage win over Derry Mathews in October in Liverpool.

The London 2012 Olympic gold medal hero is gunning for his first World title shot at Jorge Linares who defended his crown in a rematch with Anthony Crolla in Manchester last month, but Perez will be hunting a clash with the Venezuelan himself.

Perez is no stranger to the UK having met Crolla twice in Manchester in defence of the WBA Lightweight crown, and Campbell is certain that the 33 year old will provide him with his stiffest test to date in the paid ranks.

“This is the fight of my career so far and I’m so excited to be boxing on this huge night at Wembley,” said Campbell. “I feel like I’ve been improving with every performance and believe now that I’m ready for a shot at the World title.

“Darleys Perez is by far my toughest fight yet but I need to come through this in order to face the champions. We have identified Linares as a fight we want and this win would put us number one in the WBA and in a great position to fight him. It’s going to be an incredible experience and I’m looking forward to shining on the big stage.”

Campbell’s clash with Perez is the latest fight to be added to the blockbuster show at a sold-out Wembley Stadium, topped by the huge Heavyweight showdown between Anthony Joshua MBE and Wladimir Klitschko.

Former World Super-Bantamweight king Scott Quigg continues his quest to become a two-weight champion by facing Viorel Simion at Featherweight and three GB Olympians are on the bill in the shape of Lawrence Okolie, Joe Cordina and Josh Kelly.