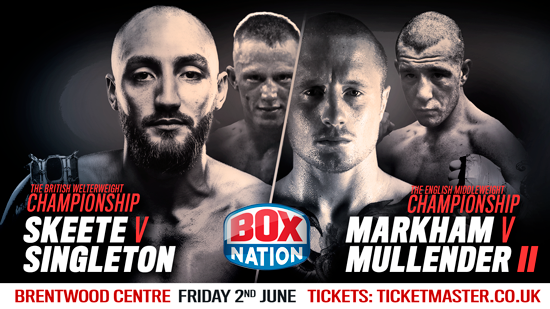 Brentwood hosts another night of Championship Boxing when BoxNation’s cameras return to the Brentwood Centre on Friday 2nd June for WAM Boxing’s 12-fight show featuring two Championships and a host of local talent following the success of their sell-out event at the venue last November.

Topping the bill once again is British, Commonwealth and WBO European Welterweight Champion Bradley Skeete (25-1-0 (11 KOs) who makes the second defence of the British Welterweight title against Manchester’s mandatory challenger Shayne Singleton (23-1-1 (8 KOs). The World ranked and unbeaten Skeete from Penge, South London is aiming to secure outright ownership of a Lonsdale belt prior to challenging for World honours in late 2017 and he needs just two more wins to realise his boyhood dream of owning Boxing’s most historic belt.

Challenger Singleton was due to face Skeete in November but withdrew through injury and was replaced by brave Scotsman John Thain. Now he returns to stake his own claim to the British Championship.

However, it is the co-feature that will whet the appetite of the local fans when Romford’s Lee Markham finally squares off against Essex rival and Brentwood’s popular Joe Mullender for Markham’s English Middleweight Championship in a rematch that has been boiling up for twelve months.

Markham already holds a win over Mullender after the pair clashed at the O2 Arena in May 2016 in what was a fight of the year contender. The former gym-mates have been bitter rivals ever since and Mullender is itching to reverse the loss and win the belt in his home town after a frustrating 2016 dogged by injury.

The Champion Markham said: “Joe clearly can’t handle what happened at the O2 and his desire to gain revenge over me seems to be getting a bit obsessive, I want a British title fight ideally, but all I hear is Joe Mullender calling me out so I have no choice but to cross the border into his Brentwood backyard and beat him up again, this time it will be easier and at least he won’t have so far to go to get home.”

Mullender responded: “Last time I was carrying an injury and that ultimately cost me the fight, I know where I fell short and this time it will be different because Lee will be facing a fit Smoking Joe The crowd will be on my side and the atmosphere will help me to, Lee can’t beat me again. It will be a dream to win the title on my own doorstep.”

Following a surprise loss in February which saw Boy Jones Jnr (11-1-0 (7 KOs) from Chingford lose his Southern Area title and unbeaten record, the next two months will prove a busy time for the young talent with two fights in as many weeks.

Jones has been holed-up in a Spanish training camp since his loss and returns to the Copper Box Arena on 20th May and then to the Brentwood Centre a fortnight after. Trained by Essex duo Dominic Negus and Lennie Butcher at Harold Hill’s Five Star Gym, Jones, despite an early career loss is still tipped for big things in the future. The manner of his loss certainly won him many fans and indeed plaudits from some of the biggest names in the sport including his namesake Roy Jones Jnr.

A special attraction for Essex fans sees Kent’s Lewis Pettitt fight on the same show as his younger Brother Jake who is making his professional debut at Flyweight. Also crossing the Dartford Bridge is Sidcup’s Danny ‘DP’ Carr who has a punch that would fell a tree. Emerging Heavyweight Giant Naylor Ball from Pinewood continues his professional rise after a stint in the Hughie Fury training camp and following his professional debut in February at the famous York Hall which ended in seconds.

Canning Town Light-Heavyweight Charlie Duffield makes a welcome return after a torrid 2016 that saw him sidelined. With last year behind him, he hopes to get back on track with a win for his legions of fans.

The show is being promoted by WAM Boxing, a promotional company headed up by Brentwood based Promoter Andy Ayling who also manages English Champion Markham. WAM Boxing is a partnership between Ayling, Francis Warren and Jason McClory who have all worked together for many years alongside Hall of Fame Promoter Frank Warren and it is Warren’s TV Channel BoxNation who will show the fight and the undercard live and exclusive.

Tickets will be available on the door from 5:30pm for the show which starts at 6:00pm.