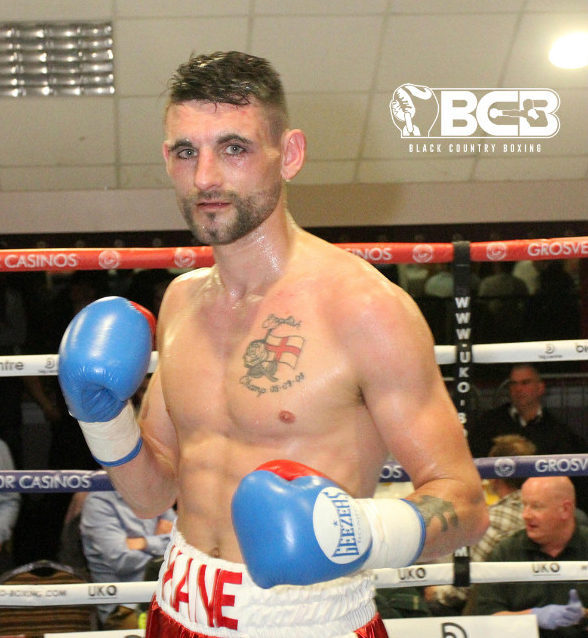 From the clutches of retirement to competing for the WBO Inter-Continental title, winning an IBF International belt in-between, it has been a whirlwind three months for Martin Gethin writes James Eley.

‘The Quiet Man’ defeated Liam Richards in front of a few hundred fans at Walsall Town Hall back in November in what was supposed to be his farewell fight in his hometown.

However days later Gethin got the call to travel to London for the IBF International Super Lightweight title at Wembley Arena in which he overcame John Wayne Hibbert in a bloodbath of a fight with a scintillating fourth round knockout.

The eye-catching victory has now landed the Walsall fighter a shot at the WBO Inter-Continental Super Lightweight title against the highly-rated Jack Catterall at the Manchester Arena in Manchester. Gethin has put his rapid rise down to the encouragement of his family and he told bcb-promotions.com he is raring to go ahead of the biggest fight of his career on Saturday, 8th April.

“It has been a bit crazy,” he said. “I went down to London with everyone expecting me to lose. I was in the changing room before the fight and my wife was with me and she showed me a video of our children wishing me luck and that wound me up. When I got in the ring I was something different. It really pushed me on.

“I thought I had nothing to lose and I had no reason not to take the fight. The fight I had before that was Liam Richards, he wasn’t doing much to me and I was thinking that was going to be my last one. But after then I thought I wouldn’t mind getting one more in before the end of the year to try and keep active a bit. Then I got the call on the Monday after to say do you want to take a fight in Wembley and I thought why not, I was thinking of retiring anyway so I had nothing to lose. I hadn’t boxed in Wembley before so I went for it and it paid off.

“I think the victory gave me a lift. With all the injuries I kept having and with me not getting much younger, I needed the motivation. It gave me the drive to go forward and I am really looking forward to this next fight. It will be the biggest fight of my career.”

The super lightweight will be facing unbeaten prospect Jack Catterall, who was the sparring partner of boxing royalty Floyd Mayweather in preparation for his last fight against Manny Pacquiao in 2015. The Lancashire fighter has had 17 successive victories so far in his career but although Gethin admits it will be a tough task, he also believes he will give the 23-year-old his hardest fight of his career to date.

“He is a southpaw and the last time I faced a southpaw was Terry Flanagan,” he added. “When I boxed him I caught him a bit off guard and I pushed him in to making it the wrong fight and giving me the fight I wanted, so hopefully I can do that again. Flanagan is on this show and fair play to him he has gone on to World Champion so it doesn’t make me look bad losing to him! I have seen a few videos of Catterall and he is pretty good. He is sharp.

“But I have seen little bits in the way that he fights that makes me think I could catch him out. I know he will be quicker than me but I will make him work and if he isn’t ready for it then I will take the upset. I think this could be one of his hardest fights. I am just going to get in there and aim to have a tear up with him. He is sharp and fast and is a good mover so it won’t be easy at all but I never have easy fights. I will find something when I am in there.”

Catterall is a power puncher and he has said Gethin’s come forward style will be perfect for him but the 33-year-old is confident he won’t be bothered by his opponent’s power and he feels he can cause a few problems of his own.

“I am not worried about him being a heavy puncher,” he explained. “I have been in with people who have said they are punchers and they have hit me clean on and I haven’t felt it at all. Derry Matthews was a puncher and I never had any trouble with his punches. Ammeth Diaz was a bit of a puncher when I got to that eliminator but he didn’t bother me. As long as I keep up my guard and don’t do anything stupid then he could come unstuck a few times.

“This fight will be my 39th, so if I can get a win on my 40th fight I will be happy with that. But I am not looking past this and I would like to win this fight because it is a big step and he is up there in the WBO. He is top six in the WBO and number two in this country and if I beat him I will be looking at a shot at World Title level. I will just keep my eye on this fight because he is really good and I will need to be at the top of my game.”