Stokes brothers box on same bill this Friday in Birmingham 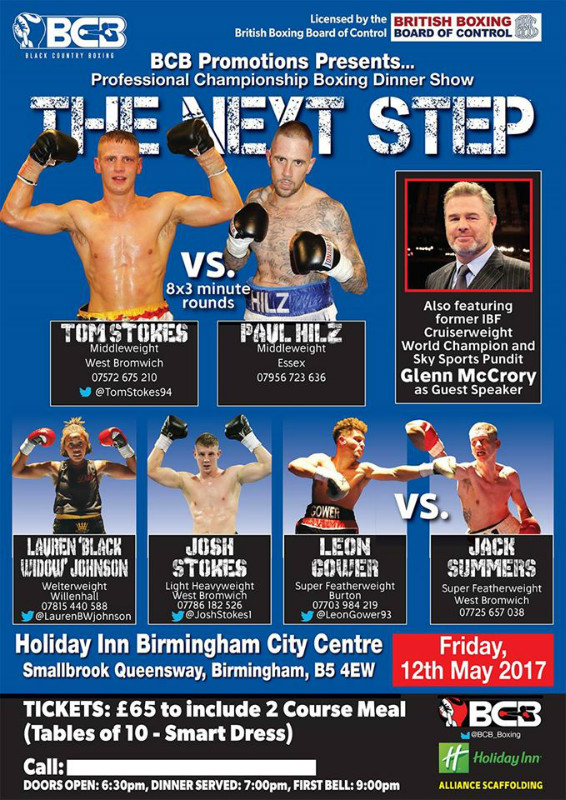 Josh Stokes is excited about boxing on the same show as his brother, Tom Stokes, in only the second fight of his professional career on BCB Promotions’ ‘The Next Step’ show at the Holiday Inn, Birmingham, on Friday, 12th May.

The 23-year-old is doing all his preparation alongside his sibling and he feels the motivation they give each other in training will pay off with a victory for both in front of a home crowd.

“It will be great to box on the same show as my brother,” he told bcb-promotions.com.  I have never done that before, even in the amateurs; so it is exciting. I just want to get my fight out of the way and quickly get back out there to watch him in his eight rounder. Hopefully I will get the win and box well and then I can just enjoy his fight then.

“We will be bringing quite a few family and friends over to the show to watch so it should be a brilliant night if it all goes to plan.

“It is nice being on another home show. I’m not too bothered where I box but it is good to be local so that you can get a lot of support and sell tickets. I like the pressure of being the home fighter and it gives you that extra lift fighting in front of a home crowd.”

The West Bromwich pugilist was impressive on his debut when he dominated Mitch Mitchell with some damaging body shots. Stokes is hoping to build on that performance here and he is expecting a tough night’s work against tough Mancunian Curtis Gargano.

“He is quite tough,” Stoked added. “Errol Johnson (manager and trainer) has told me that he doesn’t get stopped a lot so I won’t go out there looking for the stoppage. I am just looking to box and work on the little things to better my game. Obviously I will take the knockout if it comes but I am going to focus on putting everything I have learned in the gym into practice and the rounds will do me good.

“I don’t know much about him. He is small and quite fat but I have only seen a couple of his fights. He likes to come forward and he is pretty tough so I am expecting a hard fight. I want to use my jab a lot more this time and work the body again when I get the chance. I don’t want to get wild and open myself up and create bad habits. I want to get into the good habits now so that when I step up it is there already.

“I want a good solid performance. I want to box well and make sure I don’t get caught with any silly shots. I want to get a variety of shots out and have a solid defence and a good attack. This is another learning fight for me. I want to have four or five fights this year and learn as much as possible and then try and step up maybe towards the end of the year or early next year.

“I was happy with my debut. I thought I could have worked the jab more. There are always little things that I will pick up myself of areas that I could improve on. But overall I was very happy with my start and hopefully I can improve on that now as the opposition will be a step up. As each fight goes I will be getting better opposition and I need to keep building to make sure that I am ready for that.”

Tom and Josh, who are sponsored by Alliance Scaffolding in Oldbury, are joined on The Next Step by two prospects. In an intriguing super featherweight clash Burton’s Leon Gower (3-0), steps in with West Bromwich’s Jack Summers (3-1), who is fresh from an away victory over Tamworth’s Louis Fielding.

Former IBF World Cruiserweight Champion and Sky Sports pundit, Glenn McCrory, will also be in attendance. McCrory, a former British and Commonwealth Champion and now after dinner speaker, will be looking back on his career both in and out of the ring.