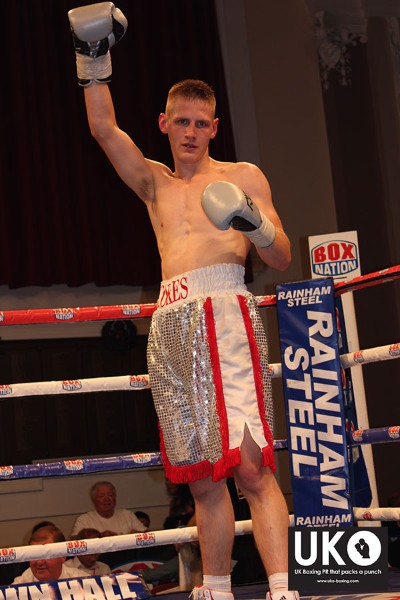 Tom Stokes ready to step it up

Tom Stokes can’t wait for his first fight of 2014 when he appears on the undercard of EJKO Promotions’ March Mayhem at Walsall Town Hall on Saturday, 1st March.

The youngster has made a solid start to life as a professional boxer, recording a hat-trick of victories in his debut year. The West-Bromwich light middleweight defeated Bheki Moyo, Matt Seawright, Danny Donchev in 2013 and next up is Bognor Regis’ Liam Griffiths.

Stokes is confident of recording a fourth straight victory.

. “I’ve had a decent camp and have had some great sparring recently. I’ve done a lot of rounds with (super middleweight) Lennox Clarke, who is also fighting on the bill.

“Len is a big, powerful lad who is a lot heavier than me. I’ve handled his shots well though and have been working on my movement.

“I’ve seen a bit of Griffiths on the internet. He seems like a bit of a ‘runner’ so I’ll have to hunt him down. I’ve already been in with a couple of experienced, awkward fighters, so I’ve got my game plan.”

The former Wednesbury ABC and Wodensborough ABC fighter has been relatively pleased with the start he has made in the paid ranks but is looking to push on in the coming months.

At just 19, Stokes has time on his side but he is hoping to step up to six rounds in the near future and box for a title by the end of the year.

“I think I’m ready to step it up now,” he added. “I train hard and live the life so I’ve got no problem with moving up to six rounds. I’d like a shot at a title soon too, a Masters, just to start building my name and getting some momentum.”

Stokes versus Griffith is one of ten fights at Walsall Town Hall next month.