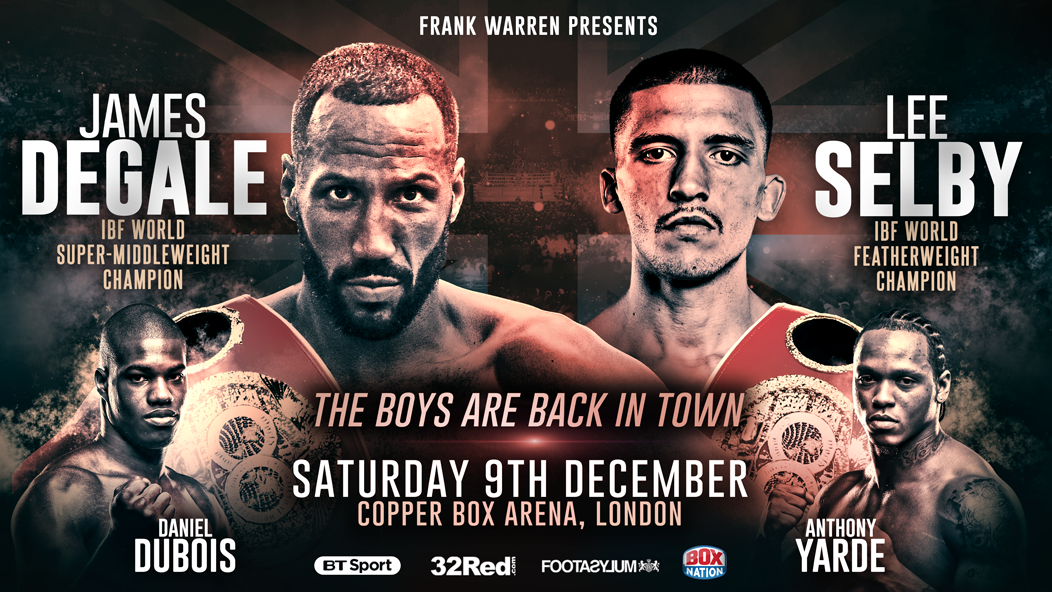 DeGale, 31, became the first British boxer to win both an Olympic gold medal and a professional World Title when he sensationally beat Andre Dirrell for the Vacant IBF 168 pounds title in the USA in May 2015.

‘Chunky’ had previously won Gold for Great Britain at the Beijing 2008 Olympics in the Middleweight boxing event, before turning professional with Hall of Fame Promoter Frank Warren in 2009.

The classy hard-hitting Londoner continued his campaign across the Atlantic with the first defence of his IBF crown against Lucien Bute in Canada in November 2015 and followed that up with a win over Rogello Medina in Washington in April 2016.

His unification fight with WBC Super-Middleweight Champion Badou Jack earlier this year ended in a majority draw. Jack was knocked down in the first round but ended strongly flooring the gutsy DeGale in the last round in New York.

Undefeated Welshman Lee Selby won the IBF Featherweight title in May 2015 when he defeated Evgeny Gradovich and has gone on to make three successful defences of his crown.

He says he is ready to give IBF mandatory challenger Josh Warrington ‘an educated boxing lesson’ once he comes through his latest defence in London on December 9.

Selby has successfully defended his title twice this year, stopping Andoni Gago at the 02 Arena in March and winning in July against Jonathan Victor Barros just four days after the death of his mother.

The Barry fighter and Warrington have been embroiled in a long-running battle of words, with Selby accusing the Leeds boxer of ‘bottling’ an opportunity to face him.

“To be defending my World Title in my home city is a dream come true,” said DeGale. “I have made my name as a road warrior but now it is time to remind everyone at home who the best Super-Middleweight in the World is.

“I haven’t showcased my skills in the UK since 2014 and I’m looking forward to putting on a memorable performance for the people of London and everyone tuning in at home on BT Sport and BoxNation.

“I’m back in full training and feeling fit and ready to go on December 9. Fans can look forward to an explosive performance, I’m itching to get under those bright lights again!”

“I can’t wait to return to the ring on a huge night of boxing,” said Selby. “There’s some terrific fighters featuring on the bill but I’ll be stealing the show and ending 2017 in style.

“I will definitely be fighting my mandatory challenger Josh Warrington after I come through this fight. To me he is just another opponent, but I think he’s got emotionally attached to me.

“I will give him an educated lesson and then move on!”

Promoter Frank Warren said: “I am delighted James and Lee are showcasing their talents on our last big show in London this year. I expect it to be a special night for James, defending his World Title in his home city for the first time. Selby is a class operator and should he come through this fight, we will be looking to make the long-awaited fight with Josh in 2018. Rising stars Anthony Yarde and Daniel Dubois will also feature on this unmissable card and I know fans will be in for a real treat.”