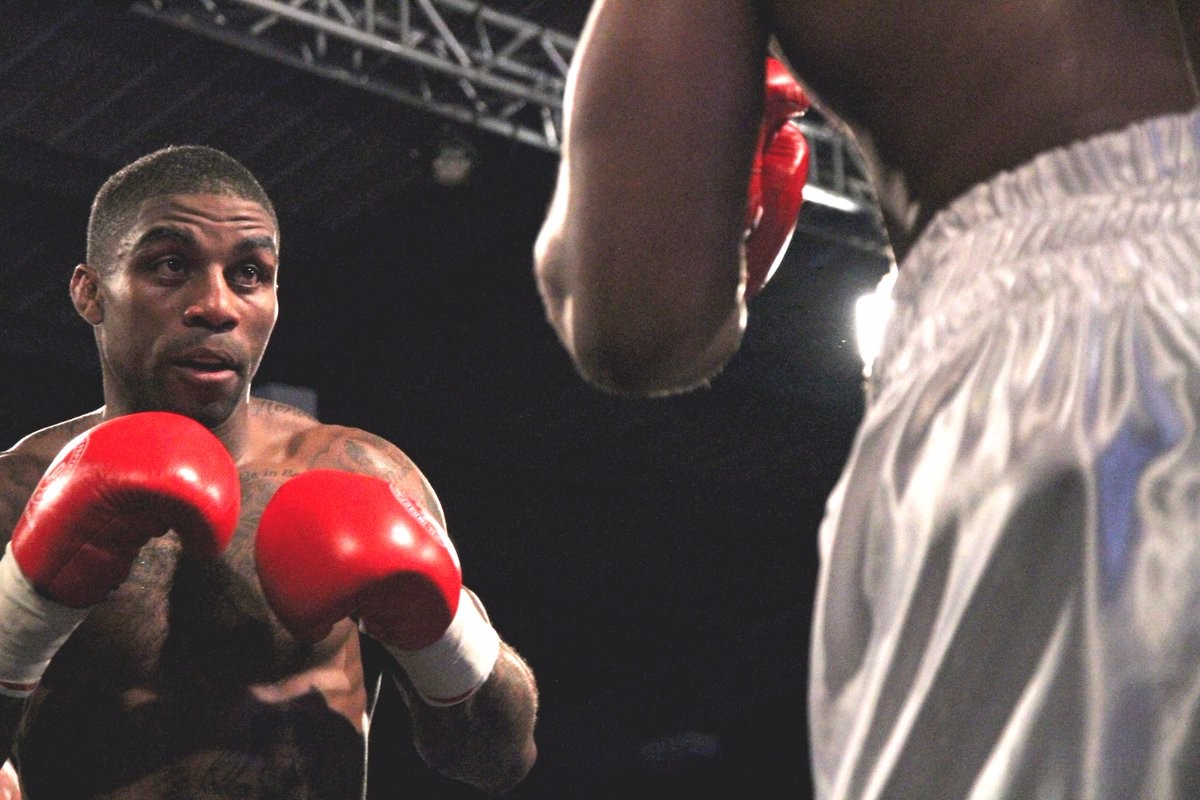 In light of the recent successes by one of Black Flash Promotion’s brightest stars- Zelfa Barrett (19-0-0) this Saturday night event, entitled ‘Manchester Young Guns’ seemed to have the feel of a brand that is gaining momentum nicely in the North-West boxing game and beyond. Boxing fans would be treated to no less than 13 fights, featuring some of the region’s hottest up-and-coming talent.

In the only title fight of the evening, the Central-Areas middleweight champion Daryl Sharp (5-25-0), would put his belt on the line against Collyhurst and Moston’s Matthew Ryan (15-2-0)- who was making his debut at middleweight, having recently lost his English super-welterweight title to Ted Cheesman.

Having only just been in the ring a week ago against Dale Coyne, Daryl Sharp is a man who quite simply loves to fight. Trained by one of the most vocal corners in boxing in Kieran Farrell– Sharpe would have to modify his usual standing of ‘opponent’ to ‘defending champion’- which he managed very successfully for the first three rounds. Pushing Ryan into the corners and landing some ferocious back hand-lead hand punches from his unorthodox stance- Sharpe was able to dominate the exchanges in these early rounds, with Ryan not having success in creating distance to work in with his jab- and with Sharpe quite simply walking through the punches to land his own.

This began to change towards the fourth round, and as has been the case previously, Matty Ryan began to grow into the fight out of sheer frustration- landing some big single right hand shots. Ryan was able to use his footwork better from here on, also landing shots to the body, as Sharpe began to tire towards rounds six and seven.

Overall, where Daryl Sharpe’s aggression brought him success in the early rounds, Ryan was able to control the fight by staying on the outside in the middle and later rounds. Daryl Sharpe showed great determination in rallying late on in the final 10th round- but it was Matty Ryan who was crowned the new Central Areas Middleweight Champion- with the judges scoring it 98-93.

Kicking off the show, first up on the card was Manchester based Liverpool fighter Mick Phillips (2-0-1) who had to settle for a draw against Italian Victor Edagha (0-23-1). In the second fight of the night, undefeated Leeds fighter Zahid Hussain (12-0-0) controlled each of the 6 rounds of his bout against the tough Nicaraguan Jose Aguilar– using his injured hand sparingly but still winning convincingly and moving well.

The first truly impressive performance of the night came from Everton Red Triangle’s Brandon ‘The Don’ Daord (4-0-0). Trained by Paul Stephenson, the compact and fast bantam weight looked impressive throughout, utilising devastating body-shots and stopping his opponent Georgi Andonov (3-7-0) in the second round. Daord from Liverpool is definitely one to watch- so said British Boxer’s Tommy Dix and I for one can see why.

Next up, Reece Cartwright (19-1-0) from Leeds, bounced back from a loss with a fourth-round stoppage of Poland’s Daniel Urbanski. In the following bout we witnessed an upset, when Pat Barrett trained Geordie Dean Laing (1-1-0) was knocked out by dangerous looking Latvian Edgars Sniedze (6-20-0), with a powerful left hook to the head in the first round.

The action continued with the increasingly popular Stacey Copeland (3-0-0) taking on Klaudia Vigh of Hungary. Stacey was clearly not in the mood for waiting around and always goes about her business with high energy levels. She walked her opponent down, landing brutal body shots, and finished the job in the second round- going from body-to-head . The referee had seen enough- and rightly stopped the fight.

Next up was Golden Gloves super bantamweight Marcel Braithwaite (5-0-0). His opponent was the tall for the weight and awkward Nicaraguan Reynaldo Cajina. Marcel looked relaxed and poised- working off the left hook, slipping and parrying shots, using his fantastically fluid movement. This was a routine win for Marcel and one feels that it will all come together for him as the calibre of opponents improves- the potential is huge.

A crowd favourite since his heroics on the last Black Flash show in September- and Fallowfield’s most famous Brazilian, Diego ‘Dynamite’ Costa (3-0-0) was up next, taking on a seasoned campaigner in the hard looking Czech Josef Obeslo. Costa was throwing massive shots from the get go- and his opponent showed incredible toughness to withstand some of the bombs coming his way. It was all over in the second round however, with Costa landing a huge left hook to send his opponent to the canvas. It was good to see Obeslo up on his feet a few minutes later, as the shot was a big one.

There was a buzz in the Bowlers Arena by now, as rising light-heavyweight Lyndon Arthur (9-0-0) made his way to the ring, watched on by good friend and Manchester MC Bugzy Malone. His opponent on the night was Tayar Mehmed– a tough Bulgarian who is not easily stopped.

Lyndon’s performance was a case of him slowly tightening the vice on Mehmed- beginning by picking him apart with his powerful jab in the first round; adding right hook to the body in the second. By the third and fourth round, Lyndon was beginning to showcase a variety of shots-with Mehmed’s face bleeding from cuts around the eyes and nose. We were even treated to some Lomachenko-esque peeling away of the opponents glove with one hand to land with the other.

Mehmed had been warned twice by the referee about spitting out his mouthguard, and when he did it again in the fifth round- the referee decided to disqualify him, but one did sense that the fight was merely moments away from being stopped due to the brutality of the beating administered by Lyndon ‘King’ Arthur. Big things to come from him soon, but his fists probably need a rest after the hammering they took smashing off the head of the ridiculously resilient Mehmed.

In the final three fights of this epic slog- we saw a very energetic and quick Nick Ball (4-0-0) dispose of Antonio Horvatic. Scouser Ball seems the kind of natural busy little fighter I could watch all day.

In the penultimate fight, Collyhurst and Moston’s Sean Ben Mulligan (6-1-0) made a successful return to the ring, by knocking out opponent Lewis Measom, with what was perhaps the punch of the night- a perfectly timed and executed left feint/right hand counter. Popular Mancunian Benny was looking in great shape and his huge vocal support will look forward to similar performances from him in the near future.

Denton Vassell (25-4-0) had to wait a long time for his opportunity to close off the evening’s proceedings, and did so with a competent win over Jordan Grannum, winning by a UD over the four rounds.

This was another successful and diverse night of boxing put on by Black Flash Promotions, continuing its mission of bringing through the ‘young guns’ whist offering good value for money for the viewing public. Look out for many of the names on the card in bigger fights in the near future.