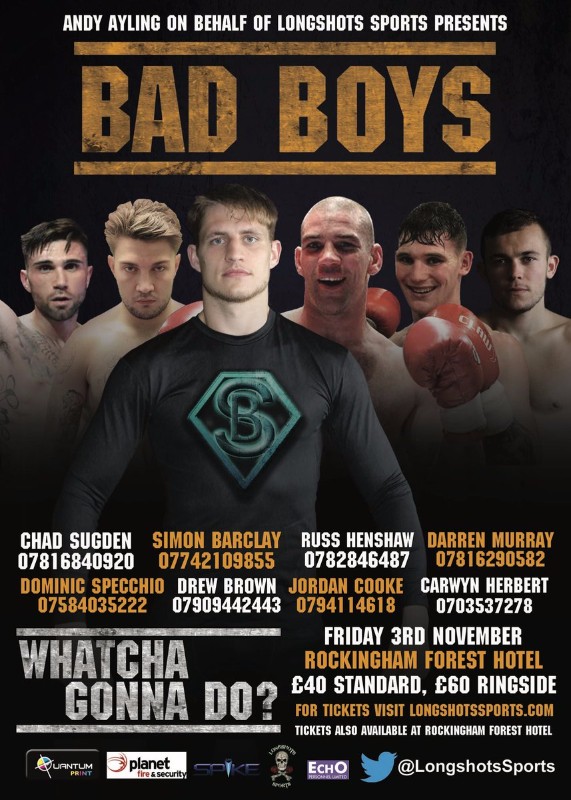 Simon Barclay went back to winning ways on Friday night when he defeated late replacement, Dimitrij Kalinovskij 39-37 on the scorecard at Longshots Sport’s ‘Bad Boys’ show in Corby.
The Corby native, headlining the Rockingham Forest Hotel for the fourth time, was due to fight Russ Henshaw in which would of been an intriguing battle due to the history the pair have. But Henshaw’s pull out gave Barclay the opportunity to put into action stuff he has been working on in the gym.
Lithuanian journeyman, Dimitrij Kalinovskij stepped in at late notice and made it clear he fancied the win as he tried to keep busy, but Barclay’s superior boxing skills was the difference between the fighters.
Barclay controlled the centre of the ring from the first bell to the last, dictating the pace with a sharp jab then doubling up when cutting off the ring in which was a routine victory for Barclay. It’s a victory and a warm up for bigger fights which are available for Barclay in which domestically, the Cruiserweight is full of potential domestic dust-ups.
The fight of the night came between another Corby native in Darren Murray as he faced the durable Lewis Van Poetsch. It turned out to be a tough night for Murray as it was clear that the weight and ring-rust proved to be his downfall as Lewis Van Poetsch claimed a rare victory, winning 39-38 on the referee’s scorecard and taking Murray’s undefeated record in the process.
It was a strong first round for Murray and proved that the ability is definitely there. He landed sharp combination’s and showed a decent variety of punches and power, damaging ‘Poochie’ in the process as blood started to run into the popular journeyman’s ‘Bronson’ esque moustache.
But Van Poetsch started to take over from as early as the second half of the second round as Murray started to visibly tire. Murray was incapable to keep up his fast-paced, come forward style at the weight, the natural 140lbs fighter was competing at 160lbs for the bout.
Murray was breathing heavy for the final two rounds as Poetsch meanwhile showed that he can be a capable fighter his self as he landed several quality, clean shots and cutting the left eyebrow of Murray in the fourth round. But the Corby native, fighting for the first time in over 2 years in front of a strong, loud support, bit down on his gum sheild and showed a lot of bravery to slug it out against a naturally bigger opponent and was able to hear the final bell.
Popular Newark fighter Chad ‘2 slick’ Sugden claimed the only stoppage of the evening when he stopped Bulgarian, Daniel Borisov.
It was an aggressive display from the Light Heavyweight who grinded Borisov down until the Bulgarian’s high guard deteriorated in the 3rd round. Sugden sent him to the canvas four times due to sheer aggression before the referee had seen enough.
There was two other local fighters on the show in undefeated Super Welterweight, Drew Brown and Super Lightweight’s one fight novice, Dom Specchio, who both won their contest by decision respectively.
Brown had his opponent, the always-game Sam Omidi, on the canvas in the second round of their four round contest when Omidi, quite literally, ran into a big right hand which landed square in the face of Omidi. Omidi tried to make the contest scrappy but Brown put on a disciplined performance to claim victory and move onto 7-0.
Dom Specchio proved that he has a sweet uppercut in his arsenal which landed at will against journeyman Fonz Alexander. It was a straight forward victory for Specchio who’s aggression was enough to unsettle Alexander who opted to cover up on the ropes for the majority of the fight.