After two tremendous bouts which saw George Groves and Chris Eubank Jr walk away from the first round of the World Boxing Super Series as victors against formerly undefeated boxers, the two Englishmen must face each other in the semi-final of this maiden tournament.

While both boxers have experienced very different highs and lows in their respective careers thus far, and stand at different levels in terms of prestige, they’ve both undertaken quite similar progressions to get to where they are right now. This fight could very well set up an incredible British rivalry in the super middleweight division to be waged for years to come.

It’d be fair to say that George Groves has come a long way since he was considered to be a very bright up and coming star. He got too big for his boots and called out reigning IBF and WBA world super middleweight champion Carl Froch, and Froch called his bluff. Defeating Groves at the Manchester Arena in 2013 and then spectacularly at Wembley Stadium in 2014, Groves was brought back down to earth.

Since then, however, Groves has composed himself and steadily made his way back up the super middleweight rankings to finally reach the peaks that he set for himself as a rising star in the division. Earlier this year, Groves claimed the WBA world super-middleweight strap from Fedor Chudinov via technical knockout, putting that title on the line in this World Boxing Super Series.

After defeating the formerly undefeated Jamie Cox in the fourth round at Wembley Arena, utilising his new found patience and using counter punching to his advantage, Groves now sets his sights on Chris Eubank Jr, who finds himself not far back of the similarly trodden path of George Groves.

Being the son of the much-loved Chris Eubank, Chris Eubank Jr has always had great expectations thrust upon him, and that may have gone to his head somewhat. During his ascendancy, Eubank Jr took on Billy Joe Saunders for the British, European, and Commonwealth middleweight titles and lost marginally by split decision. The two budding British boxers went to war, but the silky, energetic southpaw managed to edge out Eubank Jr over the rounds. 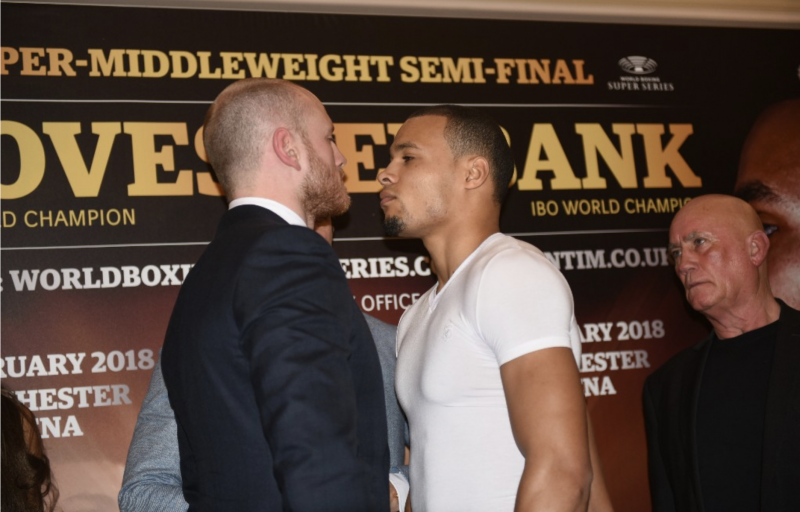 After that, Eubank needed to recover some reputation and started to call out the biggest stars of the division. Understandably, a major fight didn’t come to fruition. He continued to fight

and dominate whoever stood in front of him, switching to the guidance of Matchroom and Eddie Hearn to help him rise up the rankings. A switch to super middleweight proved to be wise as he now holds the IBO world title, which he defended in the first round of the World Boxing Super Series by demolishing the formerly undefeated Avni Yildirim in round three.

With the WBA and IBO world super-middleweight titles on the line, Ebank Jr, the owner of the minor world title, as many consider the IBO to be, comes into the semi-final as the favourite. He can be found at 8/11 to beat the 11/10 WBA champion when you bet on sports using BTC, which may come as surprising given Groves’ current standing in the division. Both boxers are very talented, on the rise, and have everything to fight for, with potential global acclaim on the line, which is why both weigh-in so closely in the odds.

Both pugilists have become calm and composed boxers both inside and outside of the ring in recent years which has paved the way for further success. Naturally, Eubank’s setback wasn’t as major as Groves’, but he’s done well, as Groves has, to reform himself from self-inflicted struggles to get to the peak of the division.

It’s set to be a major event and a hotly contested bout, as the odds suggest, with fans all over the UK excited for the semi-final. In fact, because the 20,000 seated Manchester Area that will be hosting Groves vs Eubank Jr sold out in just seven minutes, promoter and World Boxing Super Series brainchild Kalle Sauerland has said that he’ll work hard to make more seats available closer to the fight.

After the sell-out arena was announced, Groves and Eubank Jr had their first press conference in the running to the 17th February 2018 bout, which seemed to fling them both back into old habits. The desire to win on both sides was very evident as they traded verbal barbs throughout the meeting with the media despite already knowing that the event was a sell-out. The two super middleweights are ready to go to war knowing that this fight will be the foundations of their plights in the division for several years to come.

With Groves now 29-years-old and Eubank Jr 28-years-old, the two have a lot of fights ahead of them, and this massive match-up in the semi-final of the inaugural World Boxing Super Series could easily spark a rivalry between the two in this increasingly competitive division. The paths that both boxers have taken to get here as well as the showing in the first press conference will be the makings of a superb fight between two British boxers who are on the rise.