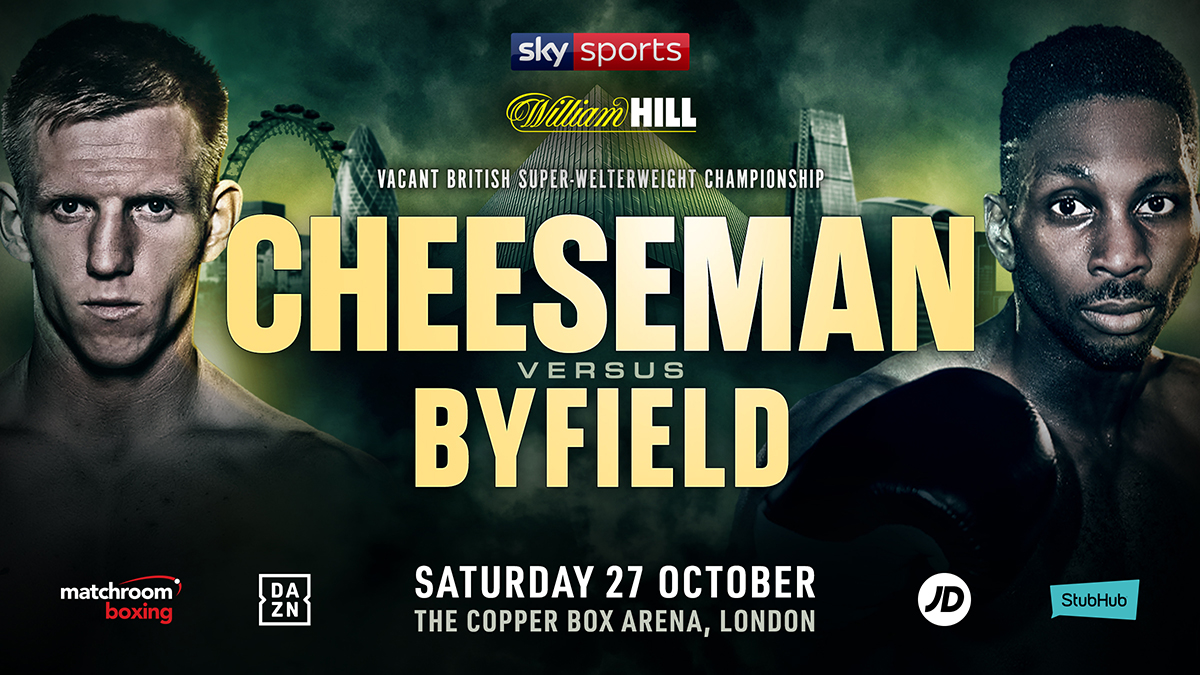 Asinia Byfield is predicting an early night for Ted Cheeseman when the Super-Welterweight rivals clash for the Vacant British title at the Copper Box Arena on Saturday October 27, live on Sky Sports in the UK and DAZN in the US.

Byfield inflicted the first professional defeat on Sam McNess last summer when he defended his Southern Area belt in style, destroying the fan favourite in five brutal rounds at the Copper Box Arena.

Now the Reading star is promising another crushing performance when Bermondsey puncher Cheeseman puts his unbeaten 14-fight record on the line in one of the most eagerly-anticipated domestic fights of the year.

“I see the fight being very one sided,” said Byfield. “One thing is for certain, this will not be going the distance. Ted has never faced a foe like me and he will never face anyone like me again. October 27th is going to be an 18+ bloody and gory affair, he won’t hear the final bell.

“I’m a new breed, a slum dog baby. Every choice and every action in my life has lead me to this moment. Through the darkest valleys I found the light. Among the darkness I found the answers and on October 27th I will answer every question asked of me.

“A fighter like me comes around every century. Ted hasn’t seen the things that I do in the ring, nobody has. I can go front or back foot, fight inside or outside and I’m a thinker as well, whatever it takes to win a fight.”

Byfield says the tragic loss of his eight-month old baby Trayvon Byfield-Griffith in 2016 has inspired him to fight on for all the parents who have experienced the pain of losing a child.

The 29-year-old admitted to losing his way after the family tragedy. His first title shot came in 2016 – when he accepted a fight against Arthur Hermann just days after the death of his son.

He lost his unbeaten record to a controversial points decision before winning the Southern Area strap against Erick Ochieng and announcing himself on the domestic scene with his memorable win over McNess.

“Asinia died the day my son Trayvon died,” added Byfield. “Now I am every parent who has had to experience that horrific event. I am my children, Javaye Archer and Tracell, Tammyha, Trayvon, Tayenha Byfield-Griffith. I am all that’s positive and I feed off of all that’s negative.

“I am the light and strength my son made me, which means I cannot and will not fail. I am proof that even in your most broken form you can still stand tall.”

Cheeseman vs. Byfield is part of a huge night of action at the Copper Box Arena topped by Islington’s John Ryder taking on undefeated Russian Andrey Sirotkin in a Final Eliminator for the WBA Super-Middleweight World title.

Gortan’s Ryan Doyle looks to build on his shock win over Reece Bellotti as he defends his Commonwealth Featherweight title against the talented and undefeated Jordan Gill.