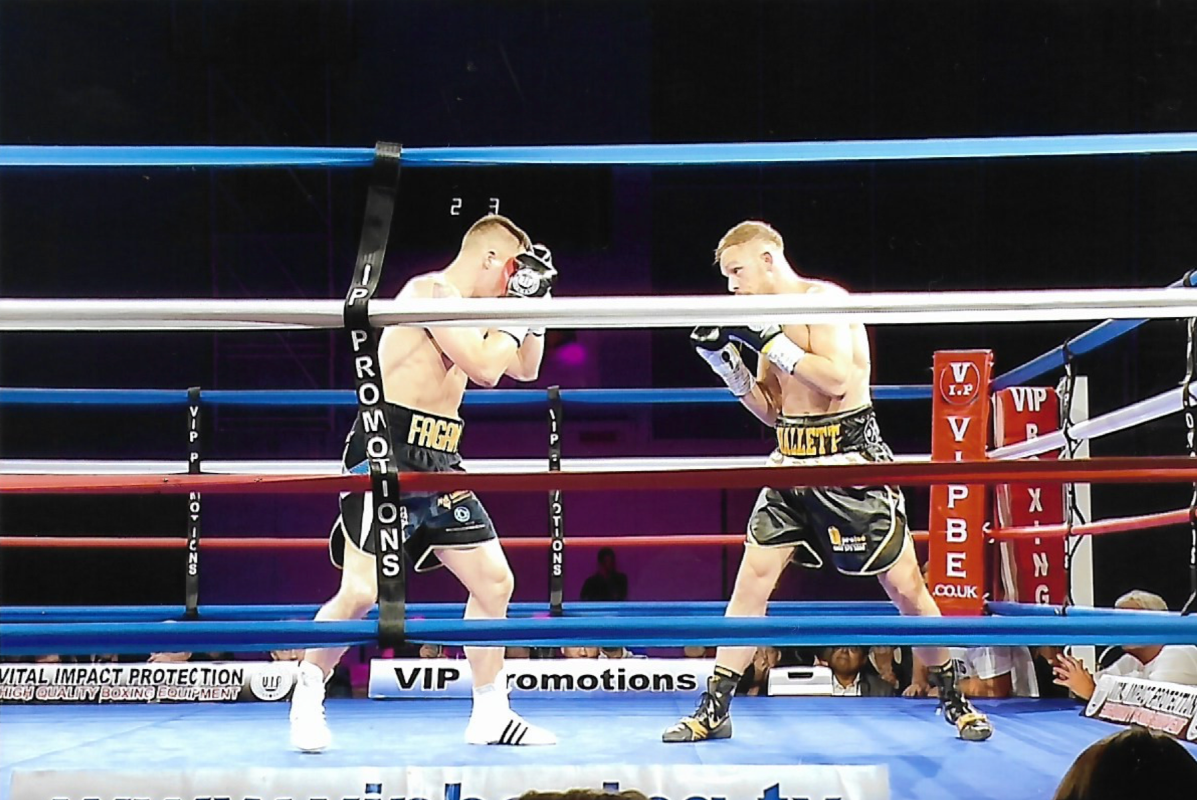 “I am sure Matty Fagan’s bout will stay in people’s memories for a long time.”

First bout featured Polish heavyweight Kemil Sokolowski who gained a six rounds points win over a very tough opponent in Phil Williams. Kemil worked well behind his jab and threw good combinations to head and body, however Phil for his part made things interesting by firing in counters when he could and proved a worthy adversary in an enjoyable contest.

Next up was young Light-heavyweight prospect and well supported Jake Burton who showed flashes of fine ring craft correct punching and fine defensive work in defeating 37yr old Andy Bishop who made a great contribution to a very good learning bout for Jake. When I saw Curtis Gargano in Bishop’s corner, I new that his man would know his way around the ring.

Burton is definitely a boy to watch the LH division which is truly a talent laden one and Andy could well be up with the best.

In a cracking eight round contest Ellesmere Port’s Matty Fagan gave a wonderful display of boxing to out point a very determined and game Lee Hallett. Fagan has all the attributes to go along way in the sport.

His eye catching array of punches leaves little to be wanted. His defensive work and lateral movements are top drawer. All his skills and combinations of the jab were on display. His aggressive boxing off his jab was a joy to the eye of the beholder. However the Lee Hallett’s of the ring are not found wanting and don’t fold easy and this boy certainly gave his all in a wonderful contest.

How on earth Hallett took some of Fagan’s body punches without going down I’ll never know. The home boy was in fine form and no matter what Hallett tried he had the answer for. A wonderful performance from Fagan. Let’s us not forget Lee Halletts contribution in making Matty pull out all his skills in his 80-71 points win.

Masher was glad to shed the ring rust and showed his class against a man who over the years has been in with the best. Dodd worked well off the jab and fired in some nice combinations off it. Riyas for his part fired back when he could and contributed to a very good bout, however Sean Dodd was in good form and will be glad to get this bout behind him for his clash next month with Liverpool’s up and coming Jay Farrell and what a fight that promises to be!

In the main event over 10 rounds for the WBC International super welter belt Ellesmere Port’s Mason Cartwright met Danny Ball. This was a bout that had the crowd roaring from the opening bell.

There was no feeling out of jabs or range finders with these boys every punch they threw was aimed to separate the other from their senses. Cartwright went straight on the attack behind his jab against ball who was only to willing to meet him head on both boys engaged in firing in head and body shots neither willing to give ground this was thrilling stuff and even in the first round it was wondered how long this would be able to last such was the tempo.

Not only was the pace fast but the punches were sinking into the body of both boys. This was not a bout for the faint hearted. Then in the fourth round it happened a tremendous exchange took place in mid ring and ball scored with a great combination to head and body and the following onslaught forced Mason against the ropes and he was in dire straits when the referee jumped in to make a timely stoppage.

The atmosphere was great with a large crowd supporting the local boys but also showing great sportsmanship. You have to give credit to the promoter Steve Woods for putting on such a show and the large crowd for their support.

I am sure matty Fagans bout will stay in people’s memories for a long time. All the opponents never came to make the numbers up.

I enjoyed the show very much and would like to thank Chris Maylett and Steve Wood VIP Promotions for arranging for me to attend the show.