Ringside Report: Ofori, Mimoune, McKenna and Davies move on to the semi-finals of MTK Golden Contract. 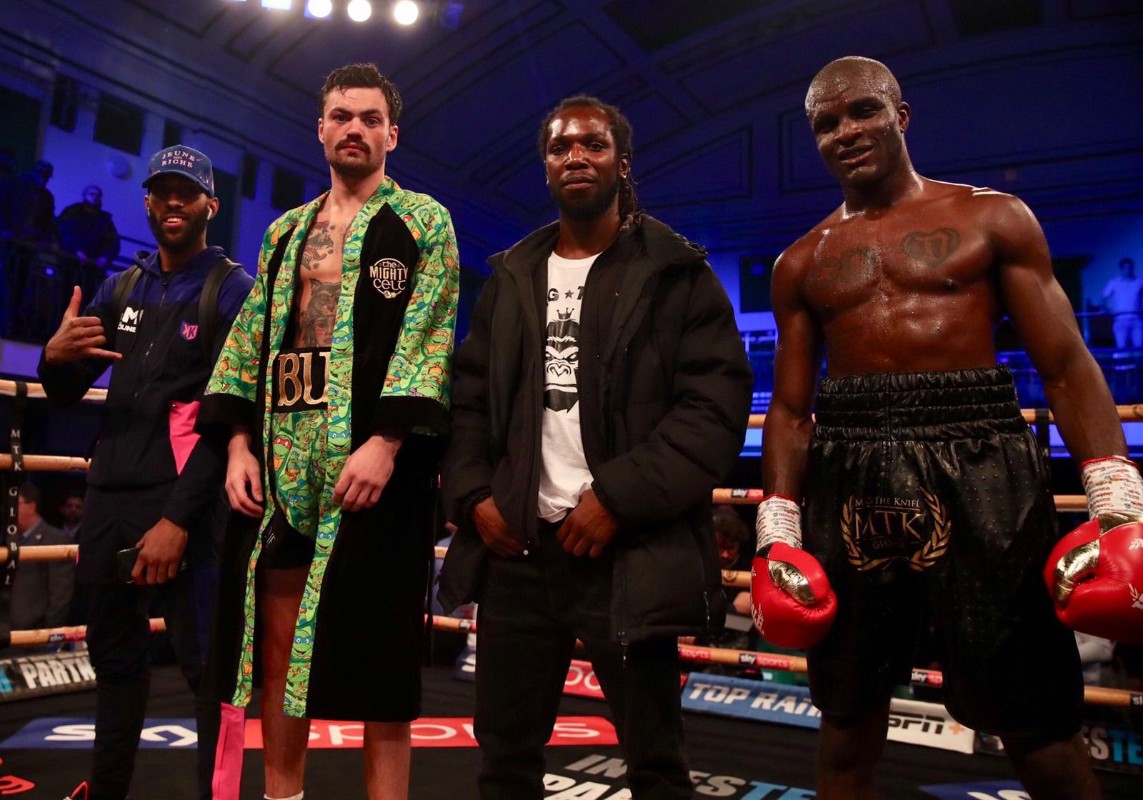 Some might call it a smaller scale version of the WBSS or a more complex one of Prizefighter/Ultimate Boxxer, but it is fair to say that after only two instalments the MTK Golden Contract format has taken up an identity of its own.

While the similarities to its predecessors are obvious, the differences are more relevant. Unlike the WBSS, to which some of the most popular divisions are inaccessible due to broadcasting or promotional conflicts, the Golden Contract operates at a level where there are no political barriers.

Unlike the one-night tournaments, where the three rounds format creates a setting where many factors other than skills might determine a winner, the ten rounds distance along with proper time to recover and train for the next opponent guarantees a fair chance to all contestants.Basically, it’s traditional boxing without the politics and with enough incentives to guarantee the fighters will compete at their best.

Live on Sky Sports, York Hall provided the stage for the Super Lightweight quarter finals last Saturday November 22. While not all the fights turned out to be genuinely 50/50, the fans surely received their money worth in what turned out to be another entertaining and exciting night under the MTK banner.

A good start from Gething in the first round, where he scored regularly with his jab while Ofori looked a bit hesitant. Jeff showed more urgency in the second and engaged in some close exchanges with both having their moments. He adjusted in the third waiting for Kieran to commit and picking his spots to land some good hooks and uppercuts. He remained in control of the action for the next two rounds timing his opponent, if not beating him to the punch. Gething was always in the fight, though, and upped his work rate in the sixth finding openings to the head. He then decided to abandon his jab in the seventh and fight in the pocket to smother Jeff’s work. Ofori spent the eighth circling around the ring, slipping and evading punches while landing some heavy shots of his own. Kieran tried to close the gap again in the ninth to spoil the action and received a stern word from the referee for use of the elbow. He remained on the offensive till the last bell although the heavier and more eye-catching shots came again from Jeff. Both men believed they had done enough and the judges themselves found hard to split them as they scored the bout 96-95 Gething, 94-96 Ofori with the third card reading 95-95. The decider came from the referee who awarded the fight and hence progress to the semi-finals to Jeff Ofori. A collected and effective performance from the Tottenham based 29 years old, particularly as he had his last fight only a week before and jumped in as replacement at the last minute.

Mimoune and Surtees arguably produced the most exciting bout of the night. Darren seemed to have the Southpaw stance all figured out as he used his jab to set up some powerful and accurate straight cross and right hook that enabled him to close the distance and follow up with quick combinations. Mimoune clearly felt the shots but responded with showboating to try and deny the damage. Surtees’ confidence was high entering the second and he sustained his momentum by knocking down the former European champion from Toulouse with another straight right hand. But, Mohamed survived the round and took the third landing several left hooks that visibly affected his opponent.

He stalked his prey patiently in the fourth, taking a few shots on the arms in order to get close and land clean, and ended the round strong with Darren trapped under siege on the ropes. He continued grinding Surtees down with heavy blows until a left hook put him on the canvas forcing the referee to stop the action at 2:21 of the fifth. Experience surely was a major factor in favour of Mimoune, who now looks like the man to beat in the tournament, but Darren Surtees can take a lot of positives from this performance and at twenty-five years of age will surely come again.

Talking about experience and levels, the gap between defending WBC International title holder McKenna and challenger Sakyi was abysmal and made for a completely one-sided bout and shut out win in favour of the former. The former Southern Area champion was competitive for the first two rounds then seemed to run out of ideas. McKenna took and maintained the initiative all throughout, constantly coming forward and pushing his man on the ropes. Sakyi tried the best he could to remain in the fight, occasionally getting through with a right hand. His best spell was probably in the eighth where he had also some success with the left hook but overall it was Tyrone who controlled the action and landed overwhelmingly more. The scores of 100-90 twice and 99-91 were an accurate reflection of the bout. A good workout for McKenna ahead of the semi-finals.

American Logan Yoon was an unknown quantity ahead of last Saturday. Although sporting a good knock-out ratio, not much could be read into his record. As it turns out, he proved to be a limited fighter whose best asset is an iron chin. Still, even if as one sided as the previous one, this bout proved uncomfortably enjoyable in his sheer brutality. Davies looked mean and determined to put on a convincing performance as he walked to the ring. And he did. After spending a few minutes studying each other with the jab, Ohara opened up with a straight right hand and the difference in power was evident as soon as it landed.

Yoon was able to take it but very much felt it and that pretty much set the pattern of the fight. A few right hooks followed with the same result. Logan was still jabbing in the second but his face started to mark up as more and more of Davies’ crosses were landing. Ohara just seemed unable to miss him with that shot, while at the same time moving to his right, which you normally wouldn’t do against a southpaw. Interesting to notice but hard to say if it was a tactical decision or just contempt for Logan’s power. More of the same until the sixth, when Yoon came forward throwing his own straight punches but without inflicting any damage. By the seventh, Davies was completely in control and administering a one-sided beating, adding uppercuts and hooks to the body to his constant straight right. The referee seemed very concerned at this point, while keeping a close eye on the American, and rightly stopped the fight in between rounds with Logan still sitting on his stool.

So, at the end of the night, the cream rose to the top. The styles and personalities of the four contenders left have the potential for some intriguing and explosive semi-finals, whichever way they are matched. We look forward to see who will be the last man standing!