“I thought Persoon won the first fight. I definitely have the power to knock Taylor out!” – Chantelle Cameron 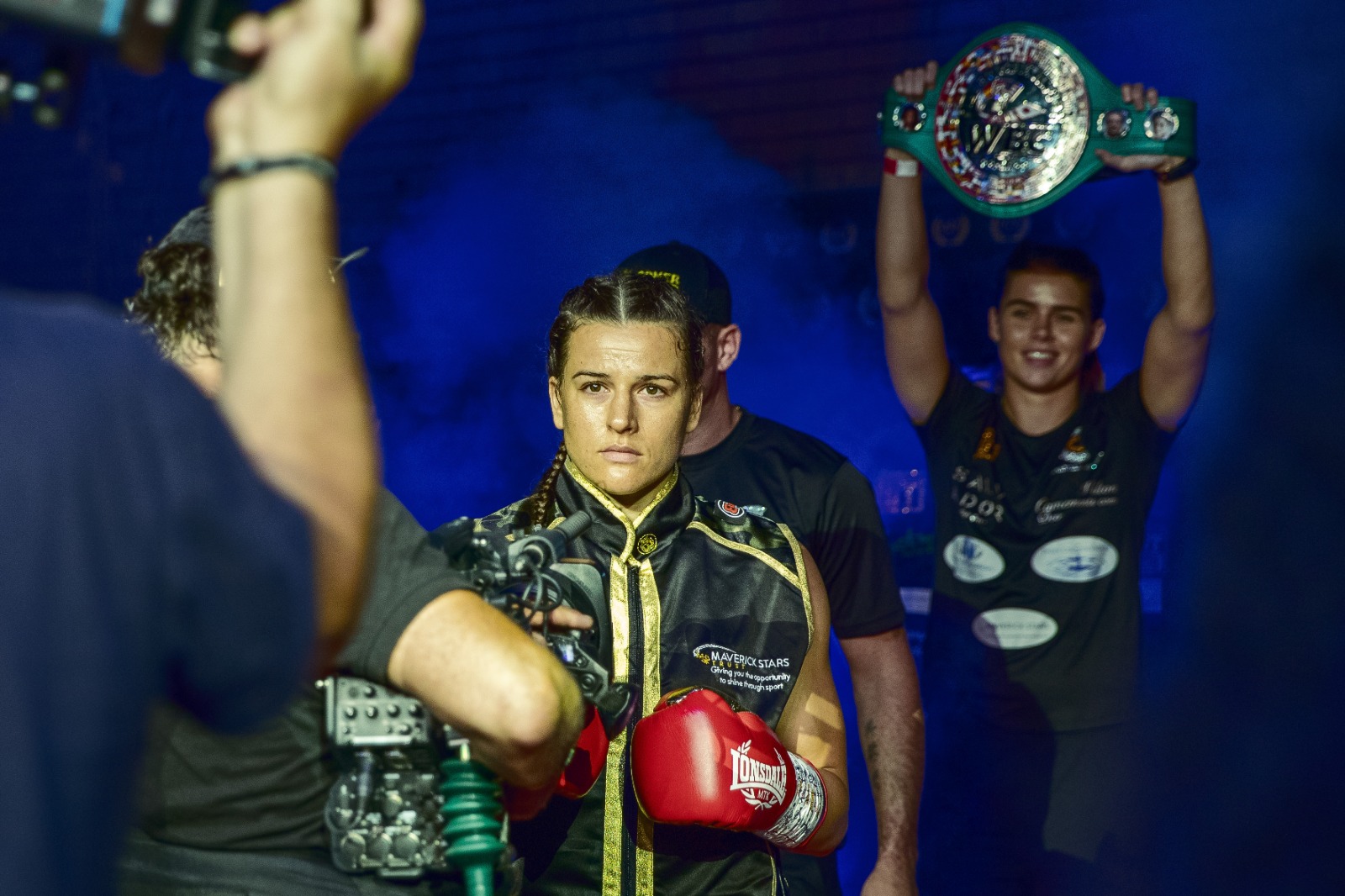 Is Chantelle Cameron in the ‘who needs them’ club? – Says she is ready to chase the lightweight pack!

Chantelle Cameron is ready. She’s returned to Jamie Moore’s Manchester gym and has been training for five weeks. She’s back in sparring too, aiding Natasha Jonas’s preparations for her upcoming fight with Terri Harper next month.

Everything is going as smoothly as it can do right now, given the precarious climate she, like many, find themselves in.

But for Cameron, something is clearly troubling her. After beginning 2020 with the clear goal of raiding all the world title belts at lightweight and super-lightweight, she now faces the ever-growing possibility of not fighting at all this year. For all the training and current sacrifice, she still has no fight date.

“It’s horrible because even now I haven’t got a set date,” said the 29-year-old, speaking from her apartment in Manchester, via the power of Zoom. “I’m praying that it’s not going to be next year because obviously that’s a whole year without fighting, which is a lot.”

Cameron’s last ring outing came little under eight months ago, where she claimed a unanimous decision victory over former WBA world champion, Anahi Esther Sanchez. “It’s very frustrating because as a fighter you need a date set in stone for you to focus and knuckle down and at the moment there’s nothing set.”

Like any boxer, momentum is a precious commodity in their careers. They only have a small window of opportunity to maximise everything they can out of the sport, whether that’s fulfilling lofty ambitions or securing their long-term future financially.

Given Cameron’s frustrations and the lack of alternative options available, it came as little surprise as to why she was so desperate to put her name in the hat for a potential bout with Katie Taylor.

“I need a fight date. I’m British and have been training in England. I’m mandatory, it’s the fight fans want to see, so just throw me in there, I don’t see why not.

“They (Matchroom) are saying I haven’t got a profile but I feel like my profile is getting bigger all the time.”

Perhaps Cameron is right. She may well just be at the forefront of the women’s equivalent to the ‘who needs them’ club. When you speak to people inside the trade or any avid watcher of women’s boxing, they all refuse to write the Northampton-born fighter off, in a clash with Taylor.

So you might be able to understand why Eddie Hearn and Matchroom have been reluctant to make an offer to Cameron, after it soon became apparent Amanda Serrano would not be fighting in the garden of Matchroom HQ. Cameron is a serious threat, albeit not the most lucrative to worth taking such a risk.

Just in January, ‘Wham Bam Chan’ was nominated for the World Boxing Council’s ‘Women’s Revelation of the Year’ award after a breakthrough 2019, which saw her clinically dispatch four opponents across two different weight classes.

“I actually like being the underdog (in a fight against Taylor) I know that people think I’m crazy for shouting about, think I’m gutsy. I think someone said I’m ballsy or something! It just makes me laugh.”

The intriguing sub-plot to all of this is that her and Taylor have indeed shared the ring before, of which the Irish star got better of. But Cameron insists if they were to renew rivalries in the pro ranks, things would go differently.

“Amateurs are amateurs. I’ll always say I wasn’t the best amateur. I was in team GB and went to the majors but my style just didn’t suit the amateurs, so it’s got nothing to do with it. Even then it was my second international, I must have had eight boxing belts when I boxed her. And she probably had over 100.

“I just think I was new to the amateur scene so I don’t really think that matters. The pro scene is completely different, the pro scene is where I’m suited.”

Shortly after our interview with Cameron concludes, it’s announced Delfine Persoon would step in to once again lock horns with Taylor, as the chief support fight on the Dillian Whyte Vs Alexander Povetkin bill set for August 22.

But before knowing the rematch had been set, Cameron was quick to point out that she believes the pair’s highly controversial first fight should have gone the other way.

“Nobody had really heard or seen of Delfine Persoon. She was a world champion for god knows how many years but, there was no actual footage of her.

“I think she hurt Katie quite bad, I can’t remember what round it was I think it was, 9 or 10 maybe, but if there was an extra 10 seconds in that round, I think Katie would’ve been stopped. She looked like she was struggling.”

When you speak to Chantelle Cameron for long enough, you grow to learn the distinct frustration that settles in her voice. This is a talented, technically gifted female athlete who is currently forced to be doing all her fighting outside of the ring, to simply get herself heard.

What strikes you is that as soon as Katie Taylor’s name is brought up, a wry smile emerges. You get the sense that her confidence in beating arguably female boxing’s biggest star, is not masquerading a facade or doing it to hanging on Taylor’s coattails, just to gain notoriety.

Instead, it is a genuine belief that the person you are talking too is convinced she can beat her.

“I’ve got the power to knock her out. I think I’m a lot stronger and a lot fitter,” the former Team GB boxer insisted. “She’s got the speed and technique on me but people are not really seeing my boxing side because I’ve not had to use it, but I can actually box as well.

“I just think my pressure is just too much. I prefer being the underdog, in my mindset, I’m the big underdog because that’s what motivates me.”

This isn’t the first year where things haven’t gone to plan for Cameron. Just at the start of 2019, her fledgling professional career was plunged into uncertainty after it was announced she would be splitting from trainer Shane McGuigan and her promotional company, Cyclone.

Despite legal grounds leaving Cameron unable to comment on her training and promotional break-up from the McGuigans, she did reveal that switching to Jamie Moore has proved to be exactly what she needed.

“I trained with (Carl) Frampton at the McGuigans so that wasn’t too bad. But I was a bit intimidated at the thought of joining a whole new team, a whole new bunch of lads, but Jamie (Moore) and Nigel (Travis – Moore’s training assistant and long-term friend) helped me settle in straight away and all the lads did as well, it was like id been there for a long time.

“It is quite different (from training with the McGuigan’s). Jamie gives everyone his time and day. With Jamie and Nigel they give you a real good confidence boost and they’re just so supportive and they make you feel good about yourself.”

Despite not getting the chance to fight Taylor this time around, Moore and Cameron will continue to work efficiently and bide their time for a world title shot. Cameron understands that although frustrated, she has to remain patient. Especially, as it gives her ample time to hone her skills under Moore’s stewardship.

“I just clicked with Jamie and Nige we just clicked and it was easy really,” Cameron continued. “I think I was quite shocked at when I did start working with them how much better and confident, I felt with them and I think that has shown in my performances.You can see my confidence now; I’m a lot more confident and happier.”

The good news for Cameron is that Taylor will have to fight her at some point in the near future. While no deadline has been set for the match-up to take place, Cameron has been installed as Taylor’s WBC mandatory, having collected their ‘silver’ belt last year. She also has options elsewhere, with her ranked number one for Jessica McCaskill’s WBA super-lightweight title.

But first things first, Chantelle Cameron needs to get back in the ring and back to doing what she does best. She’s done with chasing names or trying to catch herself a break – she just wants to fight.

“All I need now is an actual date and for it to feel like last year, when the ball was rolling for me. The sooner I get a date the better because I want to crack on where I left off last year.”