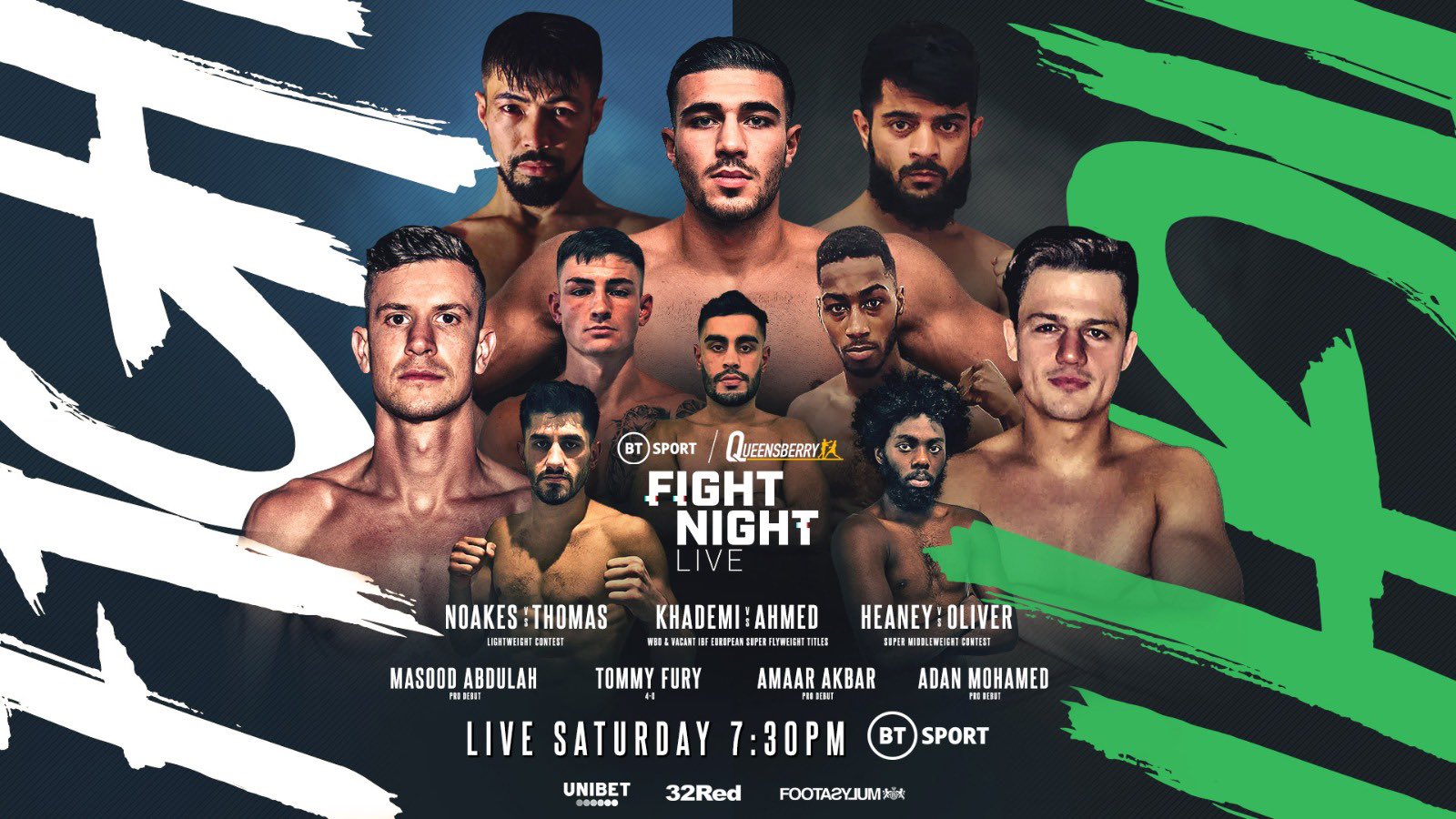 Birmingham’s Ijaz Ahmed earnt the biggest victory of his career as he outpointed Kaisy Khademi over 10 rounds in an intriguing clash of styles on BT Sport.

Ahmed’s aggressive approach caused Khademi problems from the outset as he tucked up behind his guard and moved forward looping his right hand to the chin of the champion.

Seeking to slow the approach of one another, the pair exchanged heavy body shots as the style of the opening rounds was perhaps more suited to Ahmed.

Khademi, however, retained his composure and began to increase his success as he sharpened up his footwork and made Ahmed miss.

Ahmed did continue to reap the rewards of his intense approach as he worked on the head and body of Khademi.

Off the back of instructions from his corner to ‘get him out of there’, the energetic Ahmed continued to produce impressive work as he hunched down and swung from the front foot.

As Ahmed began to tire, the boxing skills and slickness of Khademi made the difference as his success increased down the stretch of the fight.

The entertaining battle got a fitting conclusion as the pair emptied the tank in the final session, at the bell both raised their arms in celebration, but by scores of 95-95, 96-94 and 96-94 Ahmed was given the verdict.

Always amid a backdrop of much media furore and with the support of a unique fanbase, Tommy Fury defeated Scott Williams with a second-round stoppage.

Fury forced Williams to wince and touch down, via a venomous body shot in the opening round, one of a myriad of powerful body shots he was forced to take in the bout.

Nonetheless, it was a right hand to the chin that led to the fight’s conclusion as he ended proceedings in the second.

In spite of the absence of his unmistakable Stoke atmosphere, Nathan Heaney notched up his first win as a Queensberry fighter, getting the better of Ryan Oliver over ten engaging rounds.

‘The Hitman’ had bad intentions from the opening bell, rocking Oliver’s head back with forceful shots at long range.

Moving up two weights to take the fight, Oliver had success to the body of the much bigger Heaney, as he did his best to close the range.

Heaney controlled much of the bout from mid to long-range as his long jab opened the door for him to fire through the guard of Oliver.

In what became a gruelling battle, the late replacement Oliver edged into the contest, utilising his high guard to weather Heaney’s eye-catching combinations.

The work of Heaney began to take its toll in the fourth as Oliver slumped against the ropes, he rallied back into the bout and enjoyed strong patches in the fifth, before being enticed to trade leather and subsequently being dropped by a thudding left hook.

Heaney cemented his control on the fight as he stepped on his shots in the penultimate round, before being deemed the winner by a score of 97-92 on the scorecards.

In a battle of undefeated prospects, Sam Noakes blasted out Delmar Thomas in one round.

Extending his winning run to five, the decorated amateur landed a flurry of impactful right hands as he affirmed his potential in paid ranks.

The power in the shots was evident, as Thomas wilted almost immediately following a barrage from Noakes, who maintained his record of stopping every one of his opponents.

One of a trio of highly-touted debutants on the card, lightweight Amaar Akbar defeated the tough Chris Adaway over four rounds.

Akbar was forced to adapt to the pro game quickly, as Adaway’s movement and experience forced him to pick his moments and remain sharp.

A slight cut formed under the eye of the Akbar, as Adaway enjoyed successful moments in the clash, prodding home his effective lead hand.

Nonetheless, as the shots of Adaway fell short, Akbar seized the opportunity and landed slicing rights and lefts to the body and head on his way to a solid win.

Adan Mohamed navigated past the game Brett Fidoe as he won his opening professional contest.

He was forced to work for the win, as Fidoe marched forward and looked to provide Mohamed with a tough introduction to the paid ranks.

In a competitive clash, Mohamed produced sharp shots from the outside as he stayed sharp on his feet and picked the veteran Fidoe off.

Masood Abdullah also began his professional career in impressive fashion as he dispatched off Taka Bembere in two rounds.

Bringing with him a decorated amateur pedigree, Abdullah highlighted his potential as he turned over with a stoppage win.