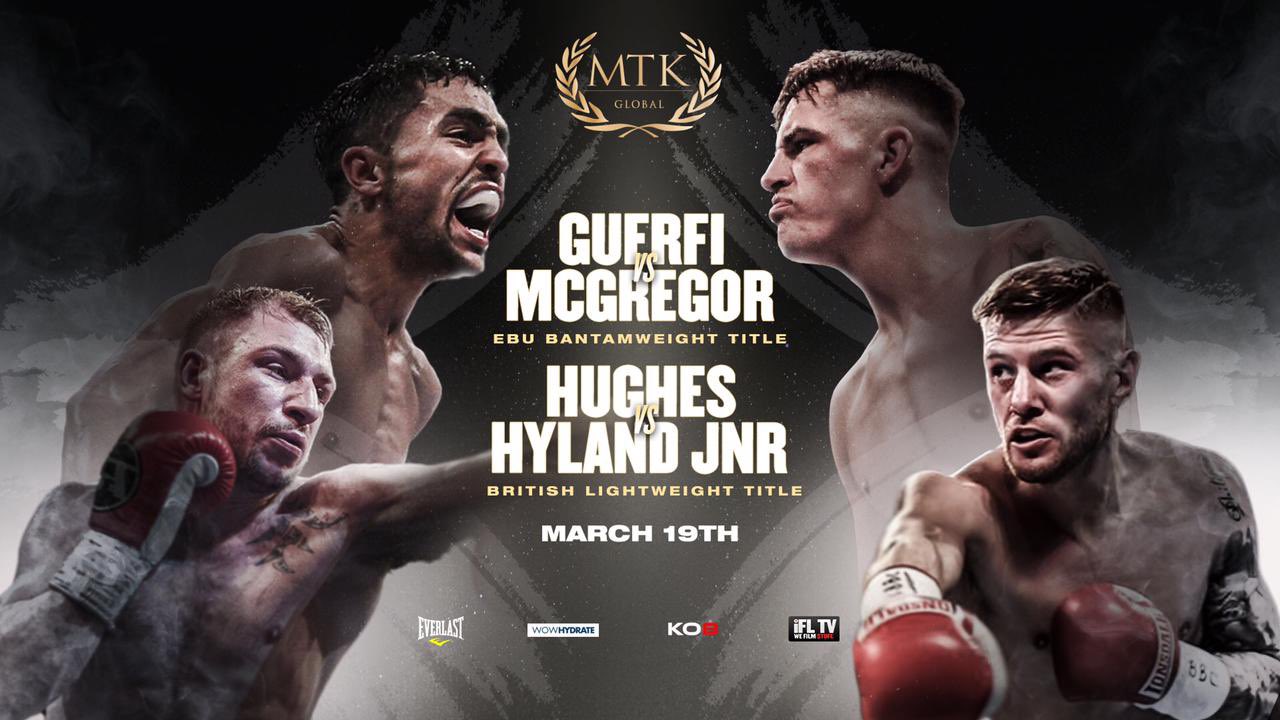 In just his 10th fight, Scotland’s Lee McGregor added the European title to the British and Commonwealth titles already in his possession as he thundered past former champion Karim Guerfi in one round.

The Scot started in blistering fashion, whipping a counter left hook to the body draining the fight out of the champion, who crumbled to the canvas.

Guerfi’s efforts at rallying back were ineffective as McGregor cynically smashed the body once again wilting Geurfi to the deck, as the game Geurfi covered up to shield his body, McGregor cemented his win with a powerful left hook to the head.

Following the fight an emotional McGregor was keen to credit the impact of Ben Davison, as well as underlining his ambitions at world level.

The incredible story of Maxi Hughes continued as he won the British title with a dominant knockout of Paul Hyland Jnr.

Bobbing and weaving, Hughes ensured the early stages of the fight was fought at close quarters, as he had substantial succes to body and head.

The contrasting styles of the two led to a couple of head collisions, which seemed to momentarily phase Hyland Jr, who struggled to tame the southpaw aggression of Hughes.

Hyland Jr settled into the contest and increased the success of his long right hand, before Hughes intensified his work and rocked the Belfast man.

The long lead hand of Hyland Jr proved a useful weapon as he sought to keep Hughes at bay, yet the rolling and slipping of the Yorkshireman gave him a route to the inside where he found a home for his powerful shots.

The patience of Hughes took its toll and he stayed low and continued to pursue the body of Hyland Jr, as the tide of the fight swayed dramatically Hughes’ favour.

The wilting of Hyland Jr was accelerated as Hughes stepped on the gas and continued his venomous body attacks. In the eighth, the systematic breakdown of Hyland Jr was complete when a big shot to the body forced him to turn his back, as the referee prematurely called a knockdown, allowing Hughes to seize the opportunity and finish the fight with a final swing.

Jamie Robinson and Billy Allington battled to an exciting draw over eight rounds, in an intriguing clash of styles.

Both began with bad intentions and had their moments in the opening round, but the more notable work came from Robinson who hunted down Allington and pursued a home for his powerful hands.

Allington assumed the role of counter puncher, nonetheless, his success was limited by the volume and variation of Robinson’s output.

In an incredibly fast-paced contest, Allington had success with his right hand against a relentless Robinson, who stormed forward letting go shots.

Behind a tight guard, Robinson continued to set a tough pace but Allington picked his shots and the pair engaged in razor tight rounds, which will have proved difficult to score.

Duffy fired his Birmingham fighter back onto the ropes, powering home big shots before the durable Holt would rally back and the pair would engage in frantic exchanges.

Both had their head rocked on a plethora of occasions and also suffered pretty significant cuts in the second.

The quality of Duffy eventually took its toll though, as he beautifully switched the angle and halted his man with a wincing left hook to the solar plexes.

Ben Davison charge, Shabaz Masoud looked impressive as he produced his eighth consecutive win by finishing Louis Norman in the fourth round.

Norman enjoyed successful moments in the opening session, clipping Masoud with a couple of right hands as he looked to make his presence felt against the stylish prospect.

Masoud, however, settled into the contest and increased his success as his output elevated, dropping the game Norman with a barrage of sharp shots to the head and body in the third.

The damage commenced with a wilting body shot and once he got to Norman, Masoud didn’t let up, as he knocked down his man twice in the fourth before the towel came in and the fight was concluded.

After Apresyan edged the first two rounds, Bendon battled back and left his highly touted opponent on shaky legs as he showed a wide variety of attacks and landed thudding shots.

In what became a gruelling back and forth contest, Apresyan looked to wrestle back control in the later rounds, however, the Birmingham man refused to let him assert his dominance on the fight.

Bendon looked to push the pace and continued to land big shots against the undefeated Polish fighter. In the final session, a tired Apresyan was deducted a point for holding and pushing down on his opponent, a moment that proved pivotal as Bendon was given the verdict by a score of 57-56.