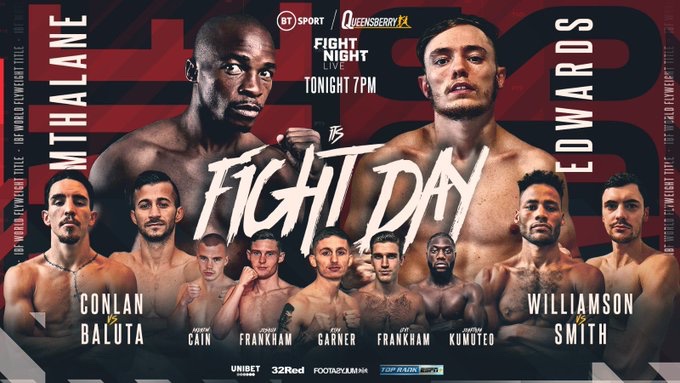 Sunny Edwards propelled himself to the top of the flyweight division with a magnificent display to dethrone long-reigning IBF Champion, Moruti Mthalane.

The slickness of Edwards was evident from the outset – using his footwork to outfox Mthalane, who remained poised and patient.

The frustration of the South African elevated as Edwards maintained his concentration and picked the champion off in the first half of the fight.

With a tribute to comic book villain ‘The Joker’ on his shorts, Edwards nothing but serious as the fight edged into the latter territory, where many predicted Mthalane would thrive.

Feints and rapid attacks proved pivotal weapons for Edwards as he tamed that aggression of the champion, who marched forward and in spite of closing the distance, struggled to land his shots.

The Brit coped with the threat of Mthalane well as remained sharp and focused, forcing the aggressive champion to punch air.

The final two rounds saw Mthalane catch up with the sprightly Edwards, although only having limited success.

An elated Edwards celebrated jubilantly at the final bell as he produced a near-perfect performance to be crowned champion.

Michael Conlan battled to a majority decision win against Ionut Baluta, in a grueling fight that takes him significantly closer to a world title.

The early rounds belonged to Conlan as he found his defensive fluency and sought to dictate the bout – making his opponent miss regularity.

Baluta, however, battled back into the bout, enjoying successful moments in what grew into an engaging battle.

Taking back control of the bout, Conlan drilled home thudding shots at short-range as Baluta began to wilt at the hands of his fresher foe.

The descent of Baluta accelerated and the body shots of Conlan increased in their venom with the momentum swaying into the direction of the Irishman.

As the two were dragged into the trenches, both showed an abundance of will and desire, exchanging in the center of the ring in a bid to dominate.

Baluta finished in strong fashion and dragged himself back into a fight that looked in the middle rounds as if it was slipping away from him.

In one of the most anticipated bouts of the night, Troy Williamson moved closer to a British title shot as he viciously knocked out Kieran Smith.

In the early stages, Smith showcased stylish boxing as he utilised his significant range to fend off the aggressive Williamson and start to edge into a lead.

However, the pressure and power of Williamson paid dividends as he remained resilient in his pursuit of Smith, eventually catching up with his man with a thunderous right hand and a flurry of shots that brought the fight to an abrupt end.

After just over a year out of the ring, Ryan Garner returned with a win over Jordan Ellison over six rounds.

Garner grew into the fight and rocked Ellison in the second with a sharp one-two combination.

The Southampton fighter was forced to overcome adversity though, as pushed forward and was sliced open with a solid shot from Ellison. The looping right hand forced Garner back to his corner wearing a widened cut above his eye.

The cut encouraged Ellison who increased his output as well as forcing Garner to rely on his boxing as he retained his grip on the fight.

Credit to the corner team of Garner, a cut that appeared at first to be quite worrying, caused him few problems in the fight as he landed his tenth professional win.

The highly touted 22-year-old produced sharp combinations to the head and body of the tough, but cagey Ali.

As Ali engaged, Frankham found avenues to produce his best work – slipping and countering with style and speed on his way to a shutout win.

Also part of the fighting Frankham family, Levi made his professional debut on the card as he defeated Paul Cummings.

A fellow debutant at super-welterweight was the charismatic, Jonathan Kumuteo, who defeated Dale Arrowsmith.

Powerful Liverpudlian, Andrew Cain also continued his impressive winning run in the paid ranks as he notched up his seventh consecutive finish against Stephen Jackson.