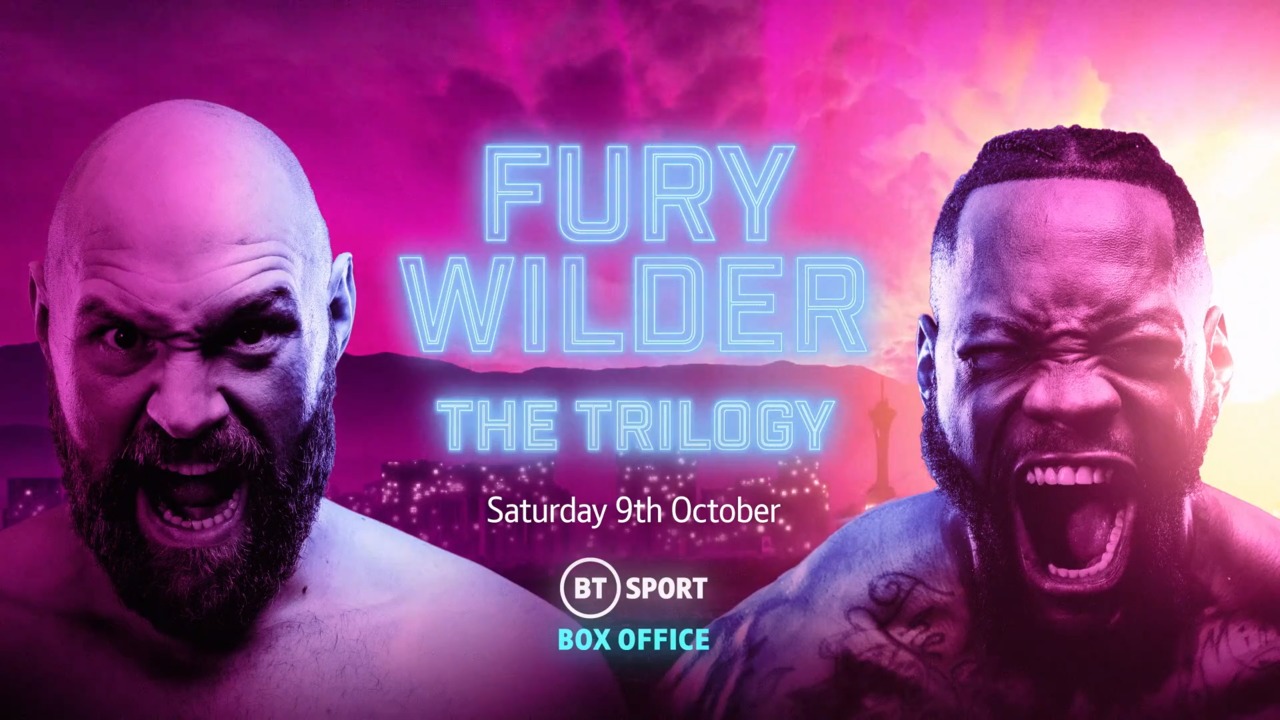 Fury Vs Wilder III – the Trilogy Fight Week is here!

It’s very rare that you see Heavyweights embarking on many trilogies in their careers, with the last one of real note coming in the form of Evander Holyfield Vs Riddick Bowe which spanned between 1992 – 1995 and included the WBA, WBC & IBF Heavyweight Titles in the first fight and ended 2-1 in Riddick Bowes favour. Other famous Heavyweight trilogies include Muhammad Ali Vs Joe Frazier ((1971 – 1975, 2-1 Ali), Muhammad Ali Vs Ken Norton (1973 – 1976, 2-1 Ali) and Floyd Patterson Vs Inegmar Johansson (1959 – 1961, 2-1 Patterson).

However, Tyson Fury & Deontay Wilder have done the exact same and have embarked on their very own trilogy which will go down amongst the greats of Heavyweight history. With the scores currently sat in Tyson Fury’s favour with one draw and one victory, Deontay Wilder will be out for revenge with his exploding right hook. After such an emphatic defeat in their second fight, it would be naive for Tyson Fury to head into this fight overlooking Deontay Wilders power and desire to claw back his WBC Heavyweight Title; a wounded animal is a dangerous animal.

Deontay Wilder Vs Tyson Fury I, December 1st, 2018
After Tyson Fury made his remarkable comeback in 2018 after his struggles with Mental Health, Depression and substance abuse in an 18 month absence from the Ring, with victories over Sefer Seferi and Francesco Pianeta, many in the boxing fraternity did not believe he stood a chance against the Bronze Bomber, Deontay Wilder. However, true to his word Tyson Fury took the fight to complete one of the greatest comebacks in sporting history and to become a two-time heavyweight champion of the world and to collect the WBC Belt which was missing from his collection. It truly was a Rocky Story.

With Tyson Fury’s last fight of note being against Wladimir Klitschko in November 2015 where he won the WBA Super, IBF, WBO & The Ring Magazine Heavyweight World Titles and defeating a man who had not tasted defeat for 11 years in Klitschko, Tyson Fury had climbed his Everest. After achieving his life-long dream he was left at a cross-roads as to what to do next. This saw him vacate all of his heavyweight world titles (which he never lost in the ring) and embark on a downward spiral which saw him hit a weight of 28 Stone and looking as though he would never fight again.

When Tyson Fury made that ring walk in December 2018 against Deontay Wilder, he gave hope to us all. Hope that you can turn things around in your lowest moments. Hope that you can achieve the impossible and you can fight another day. After what was viewed as a boxing masterclass from Tyson Fury for 11 Rounds (although he did succumb to the power of the Alabama Slammer in Round 9 where he did touch the canvas), the boxing world held its breath in the 12th Round when Tyson Fury was hit with the Right Hand of Deontay Wilder which sent him crashing to the floor with the heaviest and loudest of thuds; was the dream over?

As his eyes rolled to the back of his head, Tyson Fury looked down and out. What transpired was one of the most remarkable recoveries in Boxing History – Tyson Fury rose to his feet! In similar fashion to the Undertaker in the WWE, he got back up and continued to finish the 12th Round. It was incredible. Unfortunately when the bell rang, the scorecards didn’t read so incredible with a split decision draw.

The rematch was a completely different affair to the first fight. There was no cautiousness from Tyson Fury this time round, but a complete switch to a man possessed who didn’t want to box, but wanted to engage in an all out brawl. He fought fire with fire and went after Deontay Wilder who had a record of 95% knockouts on his record at the time –  something that no other fighter had ever attempted. Tyson Fury went straight into the first two rounds looking for the knockout, or at least a knock down, where he was evasive of Deontay Wilders big right hook. In the third round Tyson Fury found the shot which put Deontay Wilder down with a sharp and strong right hook to the temple. This set the pace for the rest of the fight with a seemingly rocked and groggy Deontay Wilder. A second knock down came for Tyson Fury in the fifth round where he landed a strong left hook to the body which sent Deontay Wilder crashing to the canvas.

In the Seventh Round, Tyson Fury was relentless in his pursuit of that knockout victory. Deontay seemed to tire drastically between Round 6 & 7, and this was evidenced when Tyson Fury swarmed him with a variety of punches to the head and body. Deontay Wilders cornerman, Mark Breland, had seen enough damage to his fighter and threw in the towel. It was a fair and empathetic decision, with Deontay Wilder looking as though he could be taken out badly at any moment and with a clear, bloody injury to his left ear and bleeding profusely from his mouth. It was the correct decision from his cornerman.

Regardless of the last fight and the emphatic fashion in which Tyson Fury won, Deontay Wilder will always be a dangerous fight for anyone. With that explosive right hand and sheer power, he can switch any heavyweights lights out with one single punch. But Tyson Fury took his hardest punch and got back up! So it’s doubtful that Tyson Fury goes into the trilogy with any hang-ups or concerns regarding Deontay Wilders punch power.

Has Deontay Wilder become a better boxer in 20 Months since their last fight? It’s hard to imagine that this is the case, but what is certain is that those 20 months will have allowed Deontay Wilder to have the adequate time to recover, regroup with his new cornerman Malik Scott and the opportunity to study Tyson Fury and that last fight. The idea that ring rust will play a part in Tyson Fury’s performance is nonsensical, as Deontay Wilder has also been out of the ring for the exact same time.

Tyson Fury will have no concerns going into this fight with regards to Wilders power and also his boxing ability, so it seems possible that Tyson Fury will have Wilders number for a third and final time and may look to take him out even quicker than the first fight.

Roll on the Trilogy, live and exclusive in the UK on BT Sport Box Office with the main event targeted between 04:00 – 05:00.