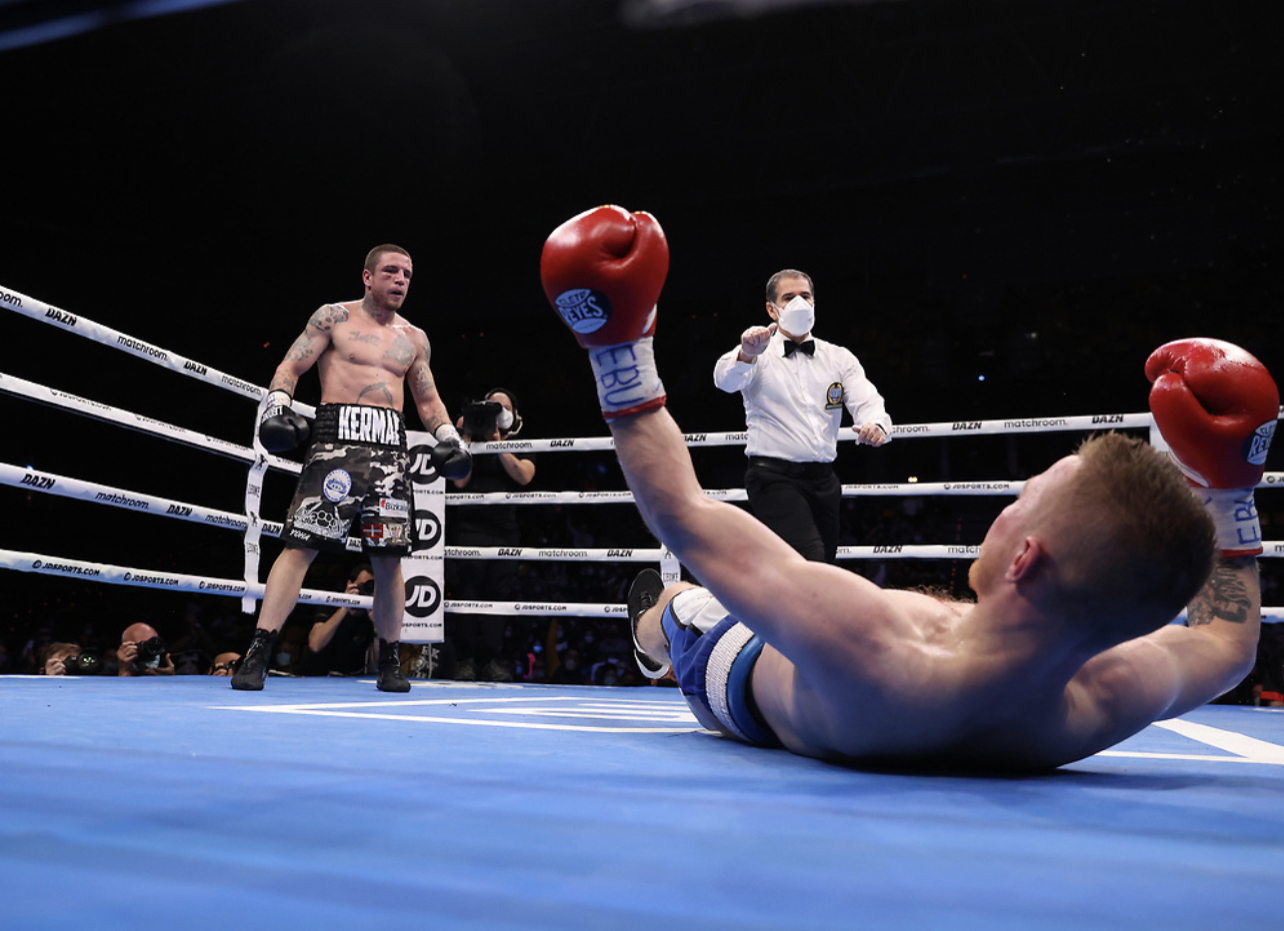 Matchroom Boxing continued the development of their ventures in Spain with another Friday night showing, featuring Spaniard Kerman Lejarraga’s (33-2-0) first defence of the EBU Super-Welterweight title he attained following his victory over France’s Dylan Charrat back in September. In the opposing corner stood Britain’s Jack Flatley (17-1-1), who entered the ring at the Bilbao Arena a huge underdog, many of the boxing fraternity expecting a comfortable runout for the in-form Lejarraga, whose only career defeats both came against the increasingly impressive David Avanesyan down at welterweight.

Lejarraga immediately got behind a stiff, punishing jab with which he found his range immediately. In fact, it was with a beautifully timed jab that ‘the Revolver’ put Flatley down on the canvas early in the opening round, his legs badly shaken and looking in real danger of being stopped before really landing anything of note. Still on wobbly legs, Flatley rose from the count and just about survived for the remainder of the round despite a barrage of hooks to head and body from the Bilbao man, all thrown with menacing intent. Flatley had still not recovered at the start of the second and appeared to be rocked again by a Lejarraga jab which was followed up by a damaging left hook to the Bolton man’s body, rocking Flatley against the ropes.

To Flatley’s credit, he did eventually establish a jab of his own during the final ninety seconds, earning momentary respite from the onslaught he had suffered during the opening five or so minutes. Flatley appeared to have finally regained some strength in his legs by the start of the third, landing a couple of jabs of his own, however, only to receive more harmful hooks to his body from the Spaniard. The right eye of the challenger was beginning to swell as a result of the precision of the piercing jab of the champion, who had so far been relentless in his pressure, allowing Flatley few opportunities to take a breather.

Flatley appeared sharper in the fourth, arguably enjoying his best round so far, despite yet more body shots from Lejarraga that would inevitably play a part in the resolution of the fight later on. A cut glistened above the right eye of Lejarraga, who appeared to be trying to walk his opponent onto punishing right uppercuts on the inside. The fifth saw an exchange of jabs between the two fighters, with Flatley perhaps admiring his work a little too much, staying in range longer than he should and leading to him taking some unnecessary punishment. This time the right uppercut did find the chin of Flatley, rocking his head back as a result and securing another round for the home fighter.

A similar pattern continued into the sixth, the left hook to head and body by Lejarraga a common theme yet again. He enjoyed particular success to the body with the left in the seventh, slowing Flatley down further and widening his surely considerable lead on the scorecards. It was in the eighth that Flatley met the canvas for a second time, this time the result of a brutal right hand over the top after his legs appeared to be stiffened by another left hook moments earlier. The Spaniard stalked the wounded challenger, disguising menacing body shots behind the jab. Flatley returned with jabs of his own, but his chin was again rocked by another Lejarraga uppercut.

The brave and determined Flatley was floored for a final time in the ninth, first hurt by more menacing left hooks before a huge right-hand rattled the Bolton man’s chin and left him sprawled out on his back as the Spanish crowd broke out into joyous rapture. Lejarraga immediately hushed his followers, respectful of the man he had been at war with moments earlier.

An incredible fight had come to a ruthless and violent end and the belt was to remain with Kerman Lejarraga, whose name will surely be on the lips of other British 154lb fighters such as Troy Williamson who recently obtained the British title in October. Flatley will come again and should be incredibly proud of the heart and desire he demonstrated throughout, remaining resolute in his pursuit of European honours.

Flatley wasn’t the only British name to feature in Bilbao on Friday night, with Manchester’s Campbell Hatton (4-0-0) fighting for the fifth time in his professional career and for the first since his controversial victory over Sonni Martinez on the undercard of Anthony Joshua v Oleksandr Usyk back in September. Many felt he lost comfortably on the night and took to social media to express their dismay at the result, perhaps unfair on the very likeable Campbell given his limited amateur experience and the target on his back given the weight his surname inevitably carries in British Boxing history.

Attila Csereklye (10-24-0) was the opponent this time around, and Hatton started comfortably, jabbing to the head of the Hungarian, occasionally following up with the left hook. The relaxed posture of the Briton immediately stood out in comparison to his previous fights where he was looked overeager to impress, this time demonstrating a patient approach, waiting for the right time to let his hands go. Such an opportunity arose not too long after, Csereklye finding himself on the canvas following a short right hook which caught the Hungarian on the temple. A left hook to the body followed by another upstairs sent the Hungarian to the floor again, this time not looking so buoyant when climbing to his feet. A strong right uppercut rocked Csereklye again as the bell sounded to signal the end of what was comfortably the best round of Hatton’s professional career to date.

It didn’t take him long to enforce more damage on his opponent in the second, again with a left hook to the body, the Hungarian now in survival mode, looking to tie Hatton up at every opportunity. This didn’t work for long however, and Hatton soon had his man trapped in the corner, throwing ruthless left hooks to head and body which were quickly followed up by damaging right uppercuts. A left uppercut then rattled the chin of Csereklye who found himself on the canvas for the final time, shaking his head as a count was administered before finally being put out of his misery with the fight being waved off.

This signalled the end of a promising return for Hatton after the previous outing which must have surely rocked the confidence of the twenty-year-old. The opponent was by no means the strongest, but Hatton will be happy with the first of what he will hope to be many knockouts in his career.

Elsewhere on the card, an entertaining super-lightweight bout between Spain’s Jonathan Alonso (20-1-0) and Belgium’s Mohamed El Marcouchi (28-2-0) saw Alonso run out a comfortable winner over eight rounds, by scores of 80-72 (x3) respectively. The right hand over the top by Alonso consistently rocked the chin of Marcouchi, who demonstrated strong heart throughout but could never enjoy a period of sustained success and was in fact deducted a point in the sixth for punches to the back of Alonso’s head.

The Spanish Super-Middleweight champion Damian Biacho (11-0-0) made his first successful defence against the durable Guillermo Rivero (8-0-1), who was eventually pulled by his corner at the end of the seventh round. Both fighters started cautiously, Rivero walking behind a tight guard which met the majority of Biacho’s shots in the opening two rounds. Rivero found himself on the canvas in the third however, the result of a straight right hand and left uppercut combination, leaving him on shaky legs. Rivero suffered two further knockdowns in the sixth and a left hook appeared to seal his fate in the seventh before he somehow managed to climb to his feet again. The writing was however on the wall and Rivero’s corner rightly retired their man at the end of that round and saved him from shipping further punishment, a knockout seemingly inevitable if the fight was to go on.