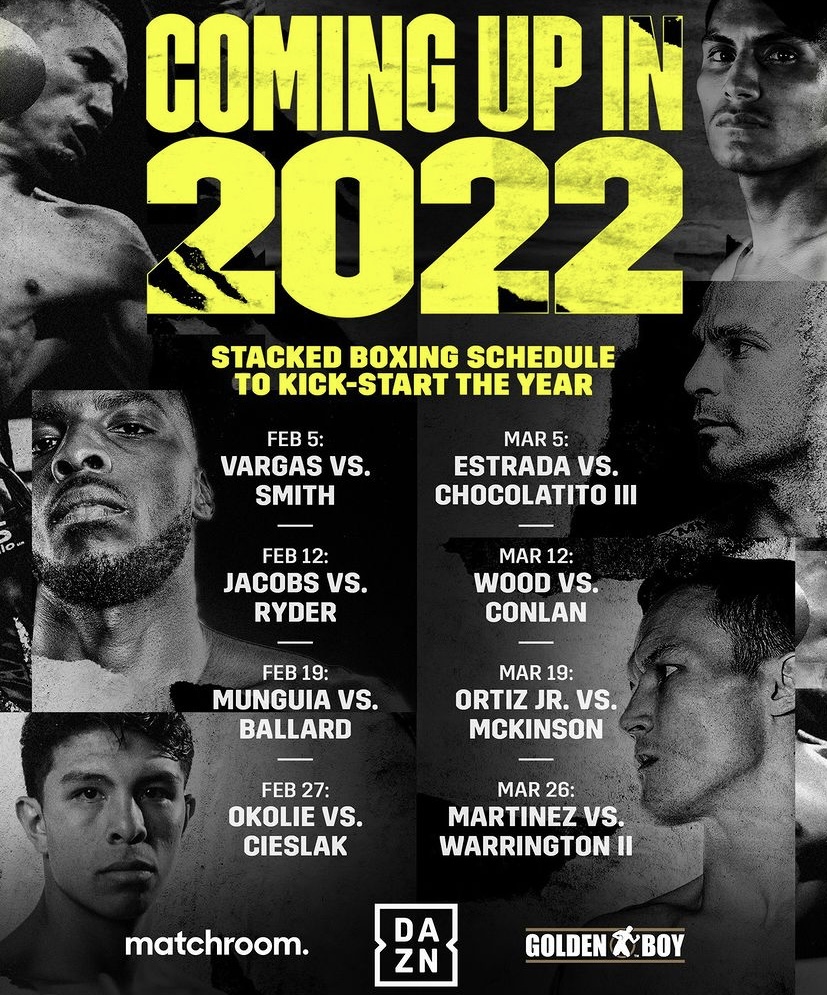 DAZN Announce their bumper schedule for the first quarter of 2022!

DAZN have announced a bumper start to 2022 with their boxing Schedule comprising of Promotions across their exclusive partners, Matchroom Boxing and Golden Boy Promotions, with an array of talent headlining their cards across the UK and America (with fight nights in Italy, Spain and Mexico no doubt also being in the works through Matchroom Boxing).

With boxing being on hold in the UK through the Month of January, it’s always a positive move to announce your shows as soon as possible to get the boxing faithful back into the swing of things and to be discussing boxing once more. After such a strong finish to the end of 2021 for DAZN, they certainly haven’t kept fans waiting for what’s next.

So, what does the schedule look like for DAZN subscribers in the first quarter of 2022? Let’s have a look…

Gila River Arena – Arizona, USA
After Liam Smiths empathic stoppage victory over Anthony Fowler in Liverpool back in October, he has now finally got his shot at former two weight World Champion Jessie Vargas in Arizona.

Many in the boxing fraternity felt that if Liam Smith didn’t beat Fowler in the all Liverpudlian Grudge Match, his career may well have been over (especially after the contentious defeat to Magomed Kurbanov in Russia back in May 2021). But he got the job done, and done well.

Jessie Vargas has not fought since his big showdown with Mikey Garcia back in February 2020, and this may be a factor coming into this fight. Liam Smith has been active in 2021 and it will be just shy of four months since the Fowler fight, so Beefy will be full of confidence going into this fight. Whoever wins this fight must surely put themselves into a strong position for a shot at the WBO Light-Middleweight World Title, currently held by Brian Castaño.

Also featuring on the card is Rungvisai V Cuadras II for the WBC Super-Flyweight World Title. In what is an exciting and stacked division, the winner of this fight will be looking to face the winner of Estrada Vs Chocolatito III, March 5th.

February 12th – Daniel Jacobs Vs John Ryder
Alexandra Palace, London – UK
Daniel Jacobs, the Miracle Man, makes his UK debut against our very own John Ryder on February 12th in a Super-Middleweight clash, with the winner hoping to push on for a World Title Shot in 2022.

Daniel Jacobs has fought the very best of the Middleweight Division in his career, with notable mentions including GGG and Canelo, and is making a final attempt at becoming a two weight world champion at Super-Middleweight. A tough, strong and durable opponent, the Miracle Man will give anybody a tough nights work in the ring.

John Ryder will be extremely pleased with this fight – this is the big fight and big name he has been waiting for. After solid displays in recent times against Jamie Cox, Andrew Sirotkin and Callum Smith, now is the time to really announce himself on the World Stage with a stellar performance against Jacobs.

The winner may then focus on the Super-Middleweight belts becoming vacant if Canelo moves up to Light Heavyweight or Cruiserweight, with the possibility of even bigger fights to come.

Added to the undercard is Romford Bull, Johnny Fisher who will be looking to pack the Ally Pally with his army of fans.

Munguia has moved up to Middleweight from the Super-Welterweight Division with the hope of becoming Mandatory challenger to Demetrius Andrade who is the holder of the WBO Middleweight World Title. Another easy fight to be made by DAZN between Matchroom Boxing and Golden Boy Promotions hopefully this year.

February 27th – Lawrence Okolie Vs Michel Cieslak
(WBO Cruiserweight World Title)
O2, London – UK
Lawrence Okolie makes the second defence of his world title against Michel Cieslak of Poland at the O2 (confirmed by Eddie Hearn in a recent interview). The most interesting thing about the date is that this fight will fall on a Sunday night!

Lawrence Okolie had been hoping for a Unification at Cruiserweight before he makes the move up to Heavyweight in the not so distant future. Unfortunately this didn’t happen, with Ilunga Makabu tied into a Mandatory Challenge for his WBC Title, Arsen Goulamirian looking to reschedule his fight with Alexey Egorov for the WBA Title (after he tested positive for COVID-19), and Mairis Breidis choosing to face Jai Opetaia for his IBF and Ring Magazine Titles in Australia.

With all of these factors in play, Okolie has taken a Voluntary Title defence against Cieslak for his WBO Title. Cieslaks only defeat has come in the form of Ilunga Makabu, which went the distance back in 2020. He has mixed it with the elite of the division and will provide a stern test for Okolie.

There is nothing better than the best fighting the best in a division, and this trilogy fight is certainly no exception. The first fight was good, the second fight was outstanding and here’s hoping that third time is the charm for it to be perfection.

The scores are tied at 1-1, so this trilogy will mark the end for these two great fighters paths crossing in what will be another incredible fight between two of the best Super-Flyweights on the planet.

Juan Francisco Estrada is ranked the best Super-Flyweight on the planet, holding The Ring Magazine and WBA World Titles, and has consistently been in fantastic fights through his career. After becoming WBC ‘Franchise’ World Champion after these two last met, he will be once again looking for a victory over Chocolatito.

Roman ‘Chocolatito’ Gonzalez was once on the top of fight fans P4P list as the best fighter on the planet; he looked unstoppable. However, after a shock decision loss to Srisaket Sor Rungvisai back in March 2017 and then a stoppage defeat by the same man in September 2017, all seemed lost for Gonzalez. However, since then he reclaimed a World Title from Kal Yafai and has had the rematch with Estrada – he will be looking to reclaim top spot.

These types of fights are always a pleasure to see – and no doubt, Srisaket Sor Rungvisai will be watching on with optimism of this fight if he wins the WBC Title In February; yet another mouth watering clash could be in the works in late 2022 for the Super-Flyweight Division!

Leigh Wood defied the odds by dethroning Chinas Xu Can at Matchroom Fight Camp in July 2021, where he became the WBA Regular Champion. However, Eddie Hearn has stated that he believes Leigh Wood will be elevated to the WBA Super Champion for this fight, permitting Leo Santa Cruz vacates the belt or is stripped by the WBA (having not defended it since 2019). This would ensure that this fight would be for the WBA Super Featherweight World Title, as it should be. This is an outstanding fight and deserves the Super Title on the line.

Michael Conlan has risen up the ranks very impressively indeed. He has mixed it with top level Featherweights to get to this point and this trajectory is always beneficial in ensuring the right tests come at the right time. With an unbeaten professional record and a stellar amateur career, Michael Conlan will be going into this bout full of confidence and will be many fight fans favourite.

A fantastic fight in the Featherweight Divison, and no doubt Josh Warrington will be watching this fight very closely!

Vergil Ortiz Jr. is American boxings worst kept secret; he’s on everybody’s lips as the next best Welterweight alongside Jaron ‘Boots’ Ennis and has been on a strong trajectory to become a Welterweight World Champion. With a record of 18 Fights, 18 Wins and 18KO’s, it’s clear to see why there is so much excitement around him.

Michael McKinsons rise since his victory over Chris Kongo in Gibraltar back in March 2021 has been nothing short of emphatic. After a victory over Polands Przemyslaw Runowski in August at Fight Camp, he pushes on in his pursuit of World Honours against Ortiz Jr. with the hope of becoming a Mandatory Challenger to Terence Crawford for the WBO World Title, with the WBO Global & International Titles on the line in this bout.

This is no doubt an incredibly tough fight for McKinson, as Vergil Ortiz Jr. is an outstanding Welterweight. But whatever you do, don’t let McKinsons record of 21/21 & 2 Knockouts away you; this will be interesting.

Kiko Martinez has been around the block. Having held a World Title in the past and many European Titles across his career, he has mixed it with the very best. After coming in as a massive underdog against Kid Galahad in November 2021, he defied the odds and proved that experience is always a key factor in any fight and he is now enjoying a fantastic end to a fantastic career – Kiko Martinez is a legend of Spanish Boxing.

Josh Warrington will be looking at this opportunity as redemption; after the shock defeat to Mauricio Lara behind closed doors in February 2021, he went straight into the rematch with Lara at Headingley Stadium in September 2021 which ended a draw after a nasty cut obtained by Lara. Credit to Warrington, he went straight back into that rematch and had proven he will fight anyone; this is the opportunity to get right back on top in the Featherweight Division and to push on for the dream fight in America for his adoring Leeds fans.

It’s certain that the winner of this fight will be aiming to unify a the WBA Title out of the winner of Wood Vs Conlan, which could be a huge domestic unification.

There will no doubt be further announcements surrounding Spanish, Italian and Mexican fight nights coming in due course. Other notable fights in the works which DAZN will definitely attempt to broadcast for April onwards include;

It is an exciting start for DAZN in 2022 and the fights on offer here are a very positive benchmark indeed for what we hope will continue throughout the year. With other Broadcasters yet to officially announce their schedules, there will be even further fights coming our way; something which will always be forever welcomed.

Catch all the action on DAZN through February and March by subscribing to the Channel for £7.99 via either your Smart TV, Games Console, Tablet, Laptop or Smart Phone.