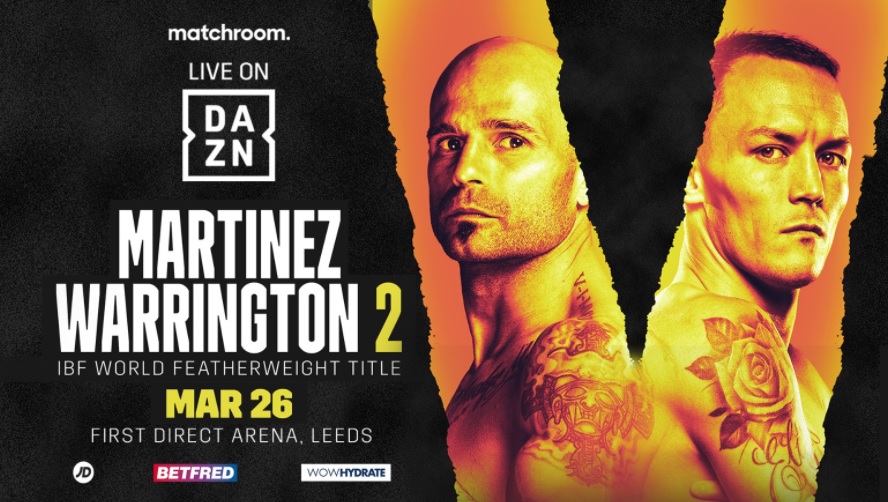 Today, Eddie Hearn’s Matchroom Boxing and streaming platform DAZN announced their plans for the first quarter of 2022, both in the UK and across the pond in the US.

The schedule kicks off in the first week of February, with Liverpool’s Liam Smith (30-3-1) finally taking on the American Jessie Vargas (29-3-2) at 154lbs. The Gila River Arena in Glendale, Arizona will play host on the 5th of February, with the pair sharing a ring at long last after two years of promoter Hearn mooting a potential clash between the two. Smith immediately called Vargas’ name after disposing of city rival Anthony Fowler back in October as he gears towards another shot at world honours at 154lbs. Vargas meanwhile lost a unanimous decision to multi-division champion Mikey Garcia back in September 2020. The undercard features a monster rematch between Srisaket Sor Rungvisai (50-5-1) and Carlos Cuadras (39-4-1), with the vacant WBC Super-Flyweight title on the line. The pair previously fought for the same title back in May 2014, with the Thailander Rungvisai winning in the eighth round despite Cuadras being up on all three of the judge’s scorecards at the time. There can be little doubt that the rematch will deliver in a division which is on fire at world level right now, the likes of Rungvisai, Cuadras, Juan Francisco Estrada and Roman ‘Chocolatito’ Gonzalez regularly battling it out in a similar manner to the revered ‘Four Kings’ of the 1980s.

Seven days later, London’s John Ryder (30-5) takes on former middleweight champion of the world Daniel Jacobs (37-3) at Alexandra Palace in London at 168lbs. Ryder recently disposed of Jozef Jurko in Austria by way of technical knockout in the fifth of a scheduled eight rounds in December, while Jacobs laboured to an uninspiring split-decision victory over veteran gatekeeper Gabriel Rosado in November of last year. Both will be looking for another shot at a world title as they approach their mid-thirties and presumably the latter stages of their careers respectively. Promotor Hearn also confirmed today in an interview conducted on Matchroom’s YouTube channel that Heavyweight fan-favourite and large ticket seller Johnny Fisher (4-0) will feature on the undercard at ‘Ally Pally’ in his fifth outing as a professional.

WBO Cruiserweight champion Lawrence Okolie (17-0) takes on Poland’s Michal Cieslak (21-1) on the 27th of February in the second defence of his world title since he attained it with a sixth-round knockout of Cieslak’s fellow countryman Krzysztof Glowacki ten months ago. The venue for the bout is yet to be confirmed, but there’s no doubting Okolie will be confident of a successful second defence before looking for mega unifications with the likes of Ilunga Makabu and Mairis Briedis. Okolie has also teased a move up to heavyweight on social media this week, which can be expected given his size at cruiserweight where his time will surely be limited.

Arguably the most anticipated bout on the schedule comes in the form of the rematch between Mexico’s Juan Francisco Estrada (42-3) and Nicaragua’s Roman ‘Chocolatito’ Gonzalez (50-2) on March 5th. The pair fought over twelve engrossing rounds last March in a true fight of the year contender and will hope to raise the bar yet again this time around. Although Estrada was the man who had his hand raised at the end of the brutal affair, many felt Gonzalez had done more than enough to be announced as victor and so the Nicaraguan will be hoping to avenge the defeat at the Pechanga Arena in San Diego on the 5th. The winner of the aforementioned clash between Rungvisai and Cuadras in February, contesting for the WBC title vacated by Estrada recently, will have a close eye on this clash with a potential mega showdown between the two winners later in 2022.

Up at 126lbs, Nottingham’s Leigh Wood (25-2) takes on Belfast’s Michael Conlan (16-0) for the WBA title at featherweight at the Motorpoint Arena in Nottingham on March 12th. Wood recently picked up the WBA strap following a massive upset victory over China’s Xu Can back in August at Matchroom’s Fight Camp, with Wood stopping Can in the final of the twelve rounds scheduled, and while many feel Conlan has perhaps slightly underwhelmed since turning professional in 2016, he has faced little difficulty so far in the sixteen fights he has contested at a decent level, disposing of the likes of Sofiane Takoucht, TJ Doheny and his old adversary Vladimir Nikitin, who controversially knocked the Irishman out of the 2016 Olympics in Rio, robbing Conlan of a spot on the Olympic podium. Both will be hoping to continue their momentum at world level with victory in just over eight weeks’ time.

Portsmouth’s welterweight contender Michael McKinson (21-0) has landed a monster clash with one of the sport’s hottest prospects in 147lber Vergil Ortiz Jr. (18-0) on March 19th, with the venue still to be confirmed at the time of writing. McKinson has long claimed to have been heavily avoided at welterweight, but his career landed a major shot in the arm following his victory over Chris Kongo in Gibralta back in March 2021. ‘The Problem’ landed a promotional deal with Hearn and Matchroom as a result, running out a comfortable winner over ten rounds against Przemyslaw Runowski back in August. Ortiz Jr. meanwhile is red hot going into the bout, winning all eighteen of his fights so far by knockout, already claiming the scalps of Egidijus Kavaliauskas, Maurice Hooker and Samuel Vargas, disposing of each in devastating fashion. There’s no doubting that the odds are stacked against McKinson, but he has stuck to his word in that he has snatched at the chance of a big fight as he looks to make big moves of his own at 147lbs. Most will be expecting Ortiz Jr. to run out as victor, but the fleetfooted McKinson could certainly prove an awkward task as his career continues to gather momentum.

The schedule concludes with a rematch between Spain’s Kiko Martinez (43-10-2) and ‘the Leeds Warrior’ Josh Warrington (30-1-1) at Leeds’ First Direct Arena on March 26th. Martinez provided a contender for upset of the year in November 2021 with a stunning sixth round knockout of the then IBF Featherweight champion Kid Galahad in Sheffield, claiming the belt that Warrington himself vacated early last year before losing to Mexico’s Mauricio Lara in what was another contender for 2021’s biggest shock. A rematch shortly followed seven months later but was over just as the fight seemed to be gathering a momentum, a cut to Lara’s eye forcing the bout to be adjudged a technical draw due to the fact more than four rounds had not been fought. Warrington has been forced to put his saga with Lara to one side, at least momentarily, and has been handed a second chance at attaining world honours again with a second fight over Martinez, whom he previously beat back in 2017 by way of majority decision. Martinez meanwhile silenced a lot of doubters with his victory over Galahad and will be more than confident of beating Warrington in similar fashion given how easily and brutally Lara disposed of the Leeds man. There will no doubt be a fiery atmosphere to greet the Spaniard but who can write him off given what happened just three months ago.