Okolie faces his toughest test as a professional today yet as Cieslak comes to town. Plus undercard preview. 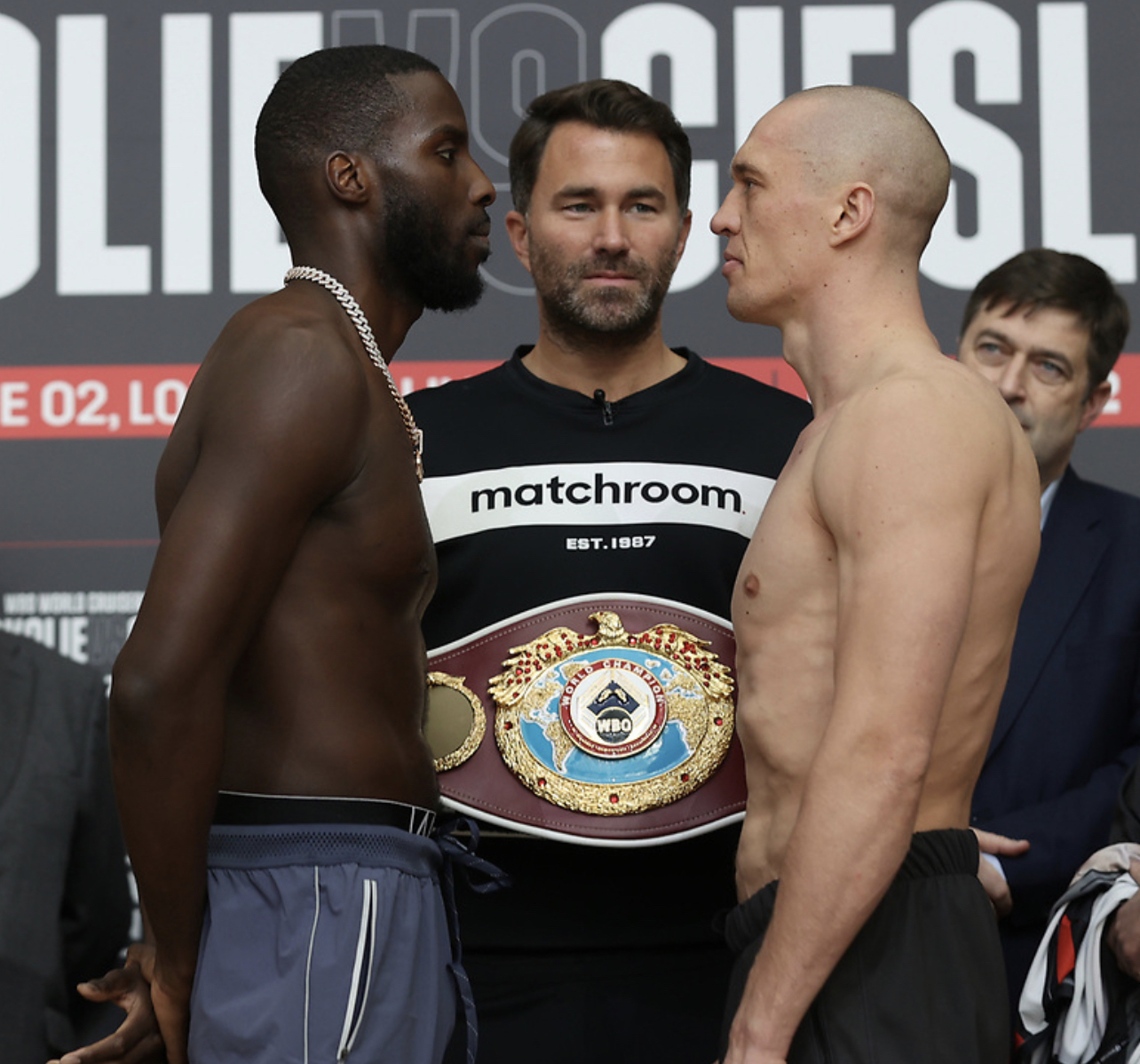 Despite Storm Eunice tearing the roof off London’s O2 Arena last weekend, the famous venue will still play host to Lawrence Okolie’s second defence of the WBO cruiserweight title that he tore from Poland’s Krzysztof Glowacki last March. This time around, it will be Glowacki’s countryman who looks to tear up the script and return the strap back to central Europe in Michal Cieslak, a man whose only career loss comes to current WBC champ Ilunga Makabu on points back in 2020. The card, also featuring the likes of Jordan Gill, Anthony Fowler, Fabio Wardley as well as Tokyo Olympians Cheavon Clarke and gold medallist Galal Yafai, will uniquely take place on Sunday 27th February in order to avoid clashing with Josh Taylor’s undisputed clash with Jack Catterall the night before. DAZN will broadcast.

Light-heavyweight prospect John Hedges (4-0-0) continues his professional development over six rounds against thirty-six-year-old Aleksander Nagolski (2-1-0) from Poland, Hedges winning all four of his contests handily so far. Australia’s heavyweight Demsey McKean (20-0-0) runs out against tough Argentine Ariel Esteban Bracamonte (11-6-0), a name British fight fans might recall with the latter engaging in a vicious slugfest with popular heavyweight Dave Allen back in 2018. McKean signed with Eddie Hearn and Matchroom Boxing in November of last year and scored a sixth-round stoppage inside a scheduled eight on his Matchroom debut out in New Hampshire in the same month. Eight-rounds will be the contest length again.

The very likeable lightweight and the son of British boxing legend, Campbell Hatton (5-0-0) also runs out over six rounds, scoring the first knockout of his professional career last time out in Spain after a controversial victory on points on the undercard of Oleksandr Usyk’s victory over Anthony Joshua last September. Joe Ducker (9-8-2), who shared a ring with Conor Benn back in 2016, losing in the second round, will be the opponent on Sunday night.

Cheavon Clarke will make his professional debut up at cruiserweight, buoyed by the experience of competing at the Tokyo Olympics last summer. Despite suffering a split-decision defeat at the last sixteen stage to the eventual bronze medallist Abner Teixeira from Brazil, Clarke still amassed an impressive medal collection, picking up the ABA title twice, a Commonwealth bronze and a European silver respectively. There will be no doubt that Clarke will be aiming for similar success as a pro, starting with his six-round contest against Toni Visic (20-29-2) on Sunday. Fellow Tokyo Olympian and flyweight gold medallist Galal Yafai also makes his eagerly anticipated debut, hoping to follow in the footsteps of older brothers Kal and Gamal, who between them attained titles at European and world level respectively. Yafai has been thrown straight in at the deep end in a ten-round bout in his first professional fight for a shot at immediately gaining a spot among the WBC rankings at 112lbs. Tough Mexican Carlos Vado Bautista (10-4-1) will be the opponent, having never been stopped thus far despite suffering four pro defeats.

Dillian Whyte’s heavyweight protégé Fabio Wardley (12-0-0) continues to soak up more professional experience, having begun his boxing journey on the white-collar scene, and has impressed so far, having already beaten the likes of Eric Molina and Nick Webb in his first twelve contests, eleven of which came by stoppage. Daniel Martz (20-9-1) will be the opponent for the ten-round contest, who has shared a ring with the likes of Charles Martin, Luis Ortiz, Bryant Jennings and Joseph Parker in the past, albeit losing all via knockout.

Liverpool’s Anthony Fowler (15-2-0) returns for the first time since his eighth-round stoppage defeat to city rival Liam Smith last October, this time at the weight above at 160lbs. Fowler, who represented Team GB at the 2016 Olympics, impressed early on against Smith before the greater professional experience of the latter shone through as he began to take over in the fight. Nevertheless, credit for Fowler to jumping in at world level and he will hope that a move to middleweight will only rejuvenate him further, starting with opponent Lukasz Maciec (27-3-1) over ten rounds this Sunday before jumping back in at European/fringe world level.

EBU European featherweight champion Karim Guerfi (30-5-0) takes on Peterborough’s highly rated Jordan Gill (26-1-1), a bout originally scheduled to take place last October before the champion was forced to pull out due to illness. Gill instead fought in a scheduled eight-round bout against a last-minute replacement in Liverpool, a bout which resulted in a technical draw due to a bad cut sustained to the head of Gill in the early rounds. Fast-forward to late February 2022 and Gill again is preparing to hopefully step-up another level with victory over France’s Guerfi, who lost the European title he previously held at bantamweight in March last year with a first-round TKO at the hands of Scotsman Lee McGregor. Neither man is a huge puncher at the weight, only sharing a combined twelve stoppages between them, and so expect the contest to last for the full twelve-rounds in what could prove an enjoyable watch for the boxing purist.

The now well-published story of Lawrence Okolie (17-0-0) will always prove inspirational, from watching Anthony Joshua pickup Olympic gold at London 2012 while working at McDonald’s before competing at an Olympics himself in 2016 and then picking up a world title five years later, Okolie is flying. Not many would have predicted him to be in this position so soon, particularly after he drew lots of criticism early on in his professional career for a style which did not capture the imagination of the armchair fan, depicted clearly in domestic dustups against the likes of Isaac Chamberlain and Matty Askin. Okolie was lambasted and accused of being ‘boring to watch’, largely due to a reliance to clinch often as opposed to letting his hands go on the inside, a role which was also played regularly by the man standing opposite him due to the Hackney man’s frightening power in his right hand.

Nonetheless, Okolie maintained his composure and linked up with one of the brightest trainers in the country in Shane McGuigan back in 2019, since securing the EBU title with a seventh-round stoppage of Yves Ngabu before blasting out Glowacki eighteen months later inside six.

Having set his eyes on mega unification bouts against the likes of Ilunga Makabu and Mairis Breidis for the backend of 2022, as well as confirming intentions to move up to heavyweight in the near future, Okolie must first move past the most difficult opponent of his career so far in Michal Cieslak (21-1-0). Having shared twelve rounds with the aforementioned Makabu back in 2020, losing unanimously on points, Cieslak has won fifteen of his twenty-one victories inside the distance, and showed decent hand speed as well as ample footwork in the caldron-like atmosphere in South Africa two years ago, and will not be overawed by a presumably hostile greeting at the O2 this Sunday evening. Though there can be no doubting the different proposition he will be facing in the much taller Okolie, who stands as an enormous 6”5, Cieslak demonstrated a willingness to step in on the inside and was not worried about what might meet him from the Congolese man whose power is not to be snuffed at.

Okolie and promoter Eddie Hearn have been longing for a mega clash with the IBF champion Breidis, who appears more occupied with a bizarre infatuation with YouTube star Jake Paul, but such unifications would be off the table if he is unable to move past the challenge put forward by the awkward Cieslak, who will provide an intriguing puzzle for the Hackney man to solve after having less than twenty fights as a pro.