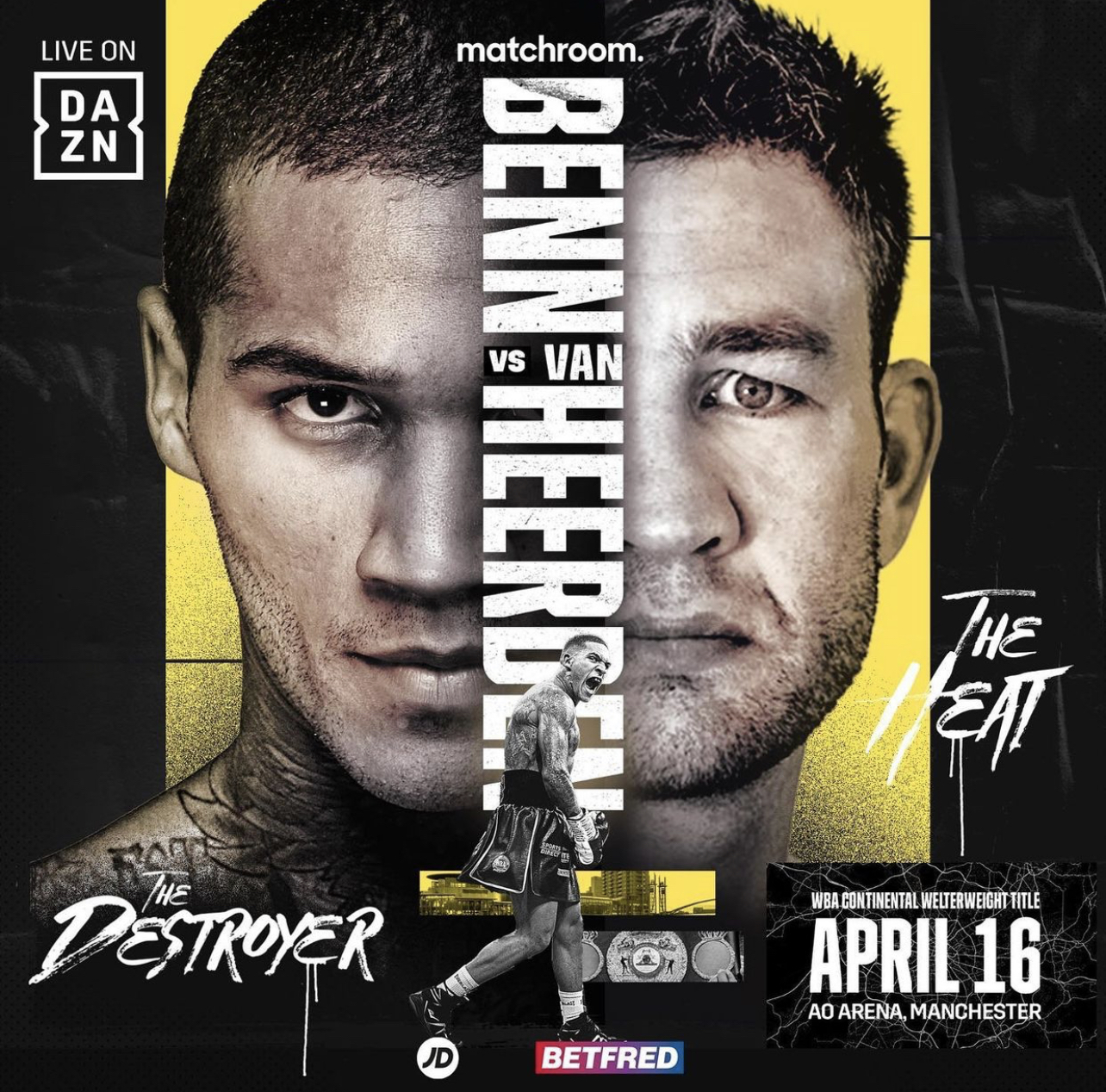 Eddie Hearn and Matchroom Boxing have today announced the next fight for up-and-coming welterweight star Conor Benn (20-0-0) as he edges closer to a shot at world honours. This time out, Manchester’s AO Arena will play host for Benn’s clash with South Africa’s Chris van Heerden (28-2-1) on April 16th, van Heerden having previously shared a ring with arguably the best prospect in the sport in Jaron Ennis, the bout albeit ending prematurely due to a cut van Heerden sustained in the opening round, forcing a no-contest.

Benn will look to win in emphatically again after blasting out former world champion Chris Algieri inside five rounds last December as he looks towards big clashes against the likes of Kell Brook and Adrien Broner later in the year. A clash with Brook was briefly mooted as the next opponent for the Essex man before, according to Benn, Brook ‘priced himself out’ of a clash after asking for a ten-million pounds purse.

The chief support of the evening will stage the cruiserweight rematch between Bournemouth’s Chris Billam-Smith (14-1-0) and Belfast’s Tommy McCarthy (18-3-0) for the European and Commonwealth titles. The pair originally clashed back in July last year at Matchroom HQ on one of the four ‘Fight Camp’ shows staged by Matchroom, with Billam-Smith running out a close winner via split-decision, many on social media it was in fact McCarthy who had done enough on the night to have his hand raised. The Irishman has not fought since, while ‘CBS’ won unanimously on the cards against Dylan Bregeon in November.

Manchester’s Zelfa Barrett (27-1-0) will challenge European super-featherweight champion Faroukh Kourbanov (19-3-0) as he gears towards a shot at a world title at 130lbs. Barrett finds himself ranked at number two with the IBF and so is in a strong position for a shot at world honours before the end of the year. First however he must get past Belgium’s Kourbanovwho will provide a more than ample task for the Brit, having shared a ring with Zelfa’s promotional stablemate Joe Cordinaover ten rounds back in March last year, the Welshman emerging a victor by majority decision. Cordina himself holds a strong ranking with the IBF (third place), potentially setting up a huge clash for world honours if either man can tussle the IBF strap from Japan’s Kinichi Ogawa, a move which would prove a mean feat in its own right.

Jack Cullen (20-3-1) also returns at 168lbs following his defeat to Kevin Lele Sadjo for the vacant European title last time out, the latter stopping Cullen with a vicious left hook to the body in the sixth. Lightweight prospect Campbell Hatton(6-0-0) also runs out, as does cruiserweight Jordan Thompson (12-0-0) and welterweight Cyrus Pattinson (3-0-0). Opponents are yet to be confirmed for all of the above at the time of writing.