Board of Control release statement regarding Taylor-Catterall investigation – Have they done enough? 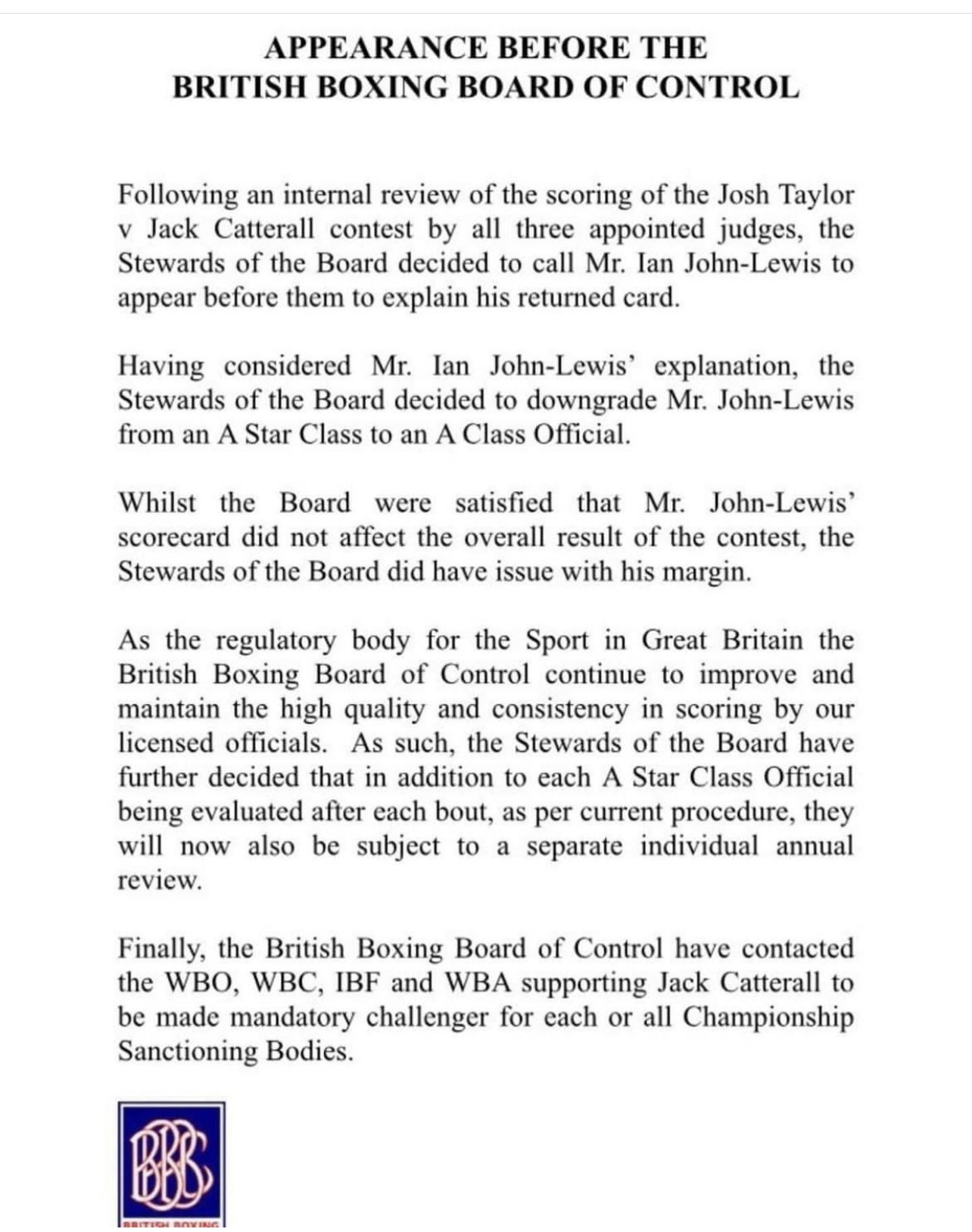 The British Boxing Board of Control have today released a statement following their investigation into the controversial scoring of Josh Taylor’s homecoming defence of his undisputed super-lightweight belts against Jack Catterall on February 26th in Glasgow. Taylor was announced a split-decision victor following the 113-112 card handed down by Victor Loughlin and the even more bizarre 114-111 score concluded by Ian John-Lewis, while Howard Foster found Catterall a marginal winner by 113-112.

The boxing fraternity reacted furiously, most adjudging Catterall a comfortable winner on the night, and immediate pressure was put on the BBBofC to ensure justice is served. The following Monday saw an initial statement from the Board stating that all three officials had submitted reports regarding the scoring and that John-Lewis will be called before the Board to explain how he reached the score of 114-111.

Fast-forward to today (Thursday 10th March) and a follow-up statement has been released following the investigation,reading in full:

‘Following an internal review of the scoring of the Josh Taylor v Jack Catterall contest by all three appointed judges, the Stewards of the Board decided to call Mr. Ian John-Lewis to appear before them to explain his returned card.

Having considered Mr Ian John-Lewis’ explanation, the Stewards of the Board decided to downgrade Mr. John-Lewis from an A Star Class to an A Class Official’.

Whilst the Board were satisfied that Mr. John-Lewis’ scorecard did not affect the overall result of the contest, the Stewards of the Board did have issue with his margin.

As the regulatory body for the Sport in Great Britain, the British Boxing Board of Control continue to improve and maintain the high quality and consistency in scoring by our licensed officials. As such, the Stewards of the Board have further decided that in addition to each A Star Class Official being evaluated after each bout, as per current procedure, they will now also be subject to a separate individual annual review.

Finally, the British Boxing Board of Control have contacted the WBO, WBC, IBF and WBA supporting Jack Catterall to be made mandatory challenger for each or all Championship Sanctioning Bodies’.

While positives can be drawn from the fact that there has finally been transparent action taken by the Board, surely this should be the absolute bare minimum expected from a body responsible for full regulation of boxing in Britain. The statement also contains several bizarre and contradictory points.

Furthermore, the Board apparently only took issue with the ‘margin’ of John-Lewis’ scorecard despite him awarding Taylor only one round more than Loughlin. The reality is that only two points separated the scores handed down by Foster [who scored for Catterall] and John-Lewis, but it is only the card of the latter that was subject to investigation.

The fourth paragraph states that each A Star Class Official will ‘now also be subject to a separate individual annual review’. This will surely come as a surprise to most that such a measure was not already in place for a body that holds the standing of the BBBofC. Of course, it is a positive that an annual review will now be in place going forward, hopefully reducing the number of controversies regarding officiating in the future.

The final paragraph states the Board have contacted the four governing bodies to support Catterall being made mandatory for ‘each or all’ of their respective belts. This in itself is a strange notion given the Board’s prior support for Taylor being ruled a deserving winner and therefore bodes the question of why they believe Catterall should get another shot if they support John-Lewis’ card.

While this may appear as a bashing of the BBBofC, the action does appear to have been a mere way of them bowing to the pressure that has been asserted on them ever since the decision was read out in Glasgow almost two weeks ago, and that the need was felt for them to appear to do something as a result. Jack Catterall has reacted to the statement, describing it as ‘not good enough’ via Twitter on Thursday afternoon. It’s hard to disagree with him. When all is said and done, he still does not hold the belts than most believe he rightfully won on the night, and while the Board’s support for him to be made mandatory again may appear positive on the surface, the likelihood of it happening is practically null. All four bodies inserting the same man as mandatory is impractical due to their own misfunctioning and inability to co-ordinate each other’s rankings, and would do a disservice to the other fighters who have spent their careers climbing said rankings as they look for title shots of their own.

Essentially, this is a mess that has been the result of years of inaction taken by those responsible for the well-being of the sport, and small gestures like those seen today do not go far enough to prevent the same from happening again in the future.