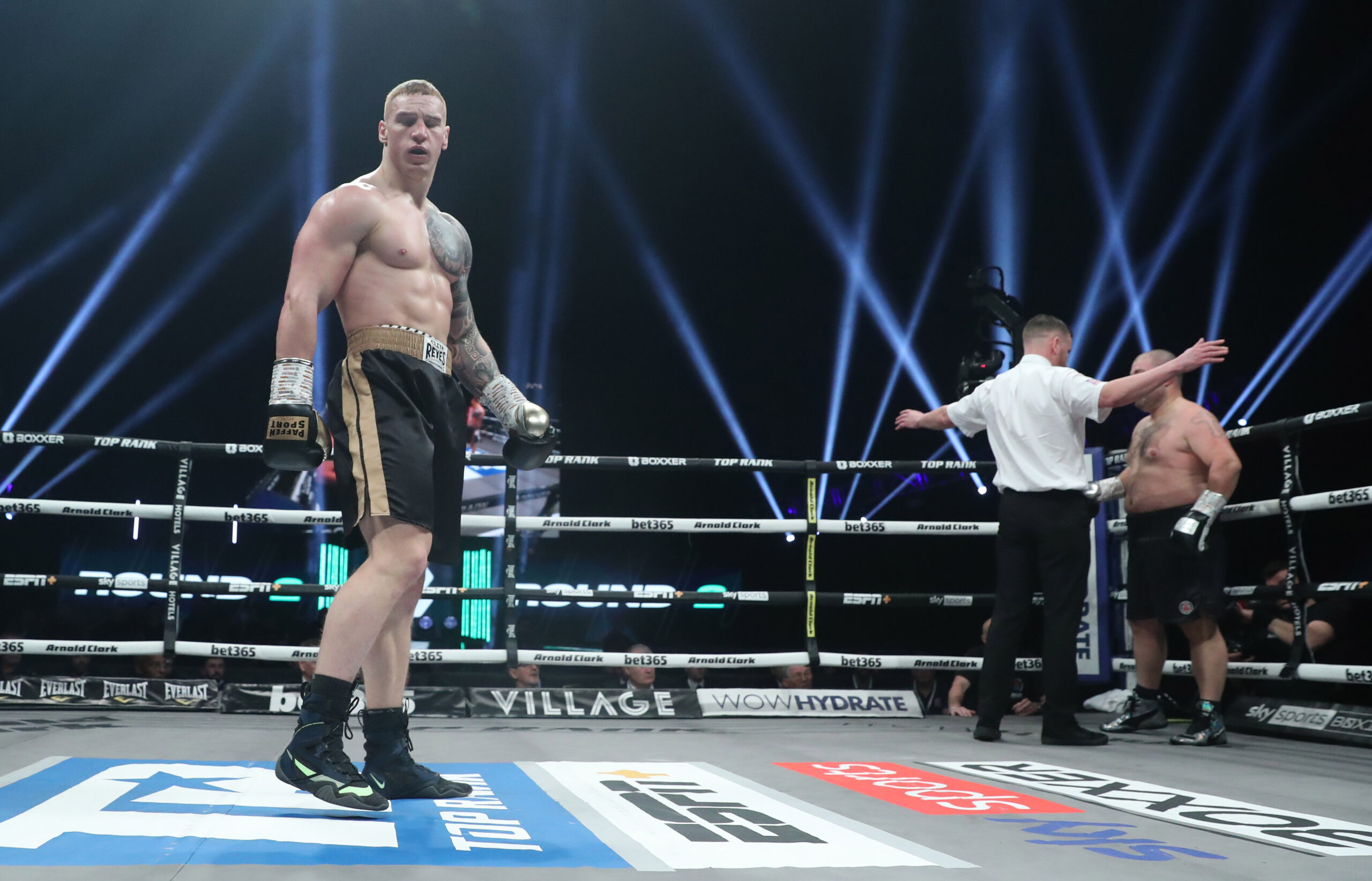 Glasgow’s SSE Arena saw yet another controversial points decision in British boxing in Scotland’s Josh Taylor’s first defence of his undisputed super-lightweight title against England’s Jack Catterall, practically everyone adjudging the lattar a comfortable winner upon the conclusion of the twelve rounds. Read our review of the main event here.

Before the opening bell rang for the bout atop of the card, Saturday’s undercard saw a scrappy fight for the Scottish Heavyweight title, a number of prospects continuing their development in their pro career, as well as Cuban Robeisy Ramirez’s third-round blowout of Ireland’s Eric Donovan, second only to Catterall in the main event in terms of the performances of the night.

The undercard coverage shown live on Sky Sports Boxing’s YouTube channel began with Kieran Molloy’s professional debut, scoring a second-round stoppage, which was perhaps a little premature, but the writing was on the wall, of Damian Esquisabel at super-welterweight. Another debutant in Kurt Walker also scored an early stoppage, this time at featherweight. Walker crashed a punishing left hook to the body of Jaroslav Hriadel which the Czech Republic man was unable to rise from in the opening round.

Scotland-based cruiserweight Scott Forrest completed a hat-trick of debutants with a technical knockout of Erik Nazaryan in the second of six scheduled rounds, the Belgian appearing to suffer an injury to his right hand with a minute remaining and deciding he had suffered enough. 154-pounder Bilal Fawaz moved to 2-0 as a professional with a third-round stoppage of Malam Varela, scoring an early knockdown in the first with a perfectly timed left hook. Fawaz did get caught a few times with Varela’s right hand but eventually put the Portugal man away with a series of unanswered straight right-hands.

Attention then turned to Sky’s main broadcast as they geared towards the big fight in the main event.

Scottish super-middleweight John Docherty returned in front of the Sky cameras for the first time since his defeat to Jack Cullen in 2020 with his second victory in a week, scoring a second-round knockout of Jordan Grant. Docherty settled quickly behind an accurate southpaw jab and regularly walked his man onto a sharp left uppercut as Grant sought to close the distance. The key moment came in the second half of the second where a left hook to the body was quickly followed by the same shot to the head which left Grant on the canvas and failing to make the referee’s count.

Ebonie Jones made the long journey from Portsmouth to Glasgow for the second fight of her professional career, resulting in a 57-57 draw on the scorecard of referee Kevin McIntyre. There can be no doubting the closeness of the fight, with opponent Eftychia Kathopouli applying lots of pressure and enjoying more success down the stretch after Jones started well with accurate hooks and right hands over the top. Jones will no doubt have learned a lot across the six rounds with some solid work from the matchmaker. Jones’ record now stands at 1-0-1 at featherweight while Kathopouli stands at 4-3-1 respectively.

Andy Lee’s welterweight prospect Paddy Donovan continued his professional development with a sixth-round technical stoppage of the tough but limited Miroslav Serban. Ireland’s Donovan settled quickly behind his southpaw jab, looking very relaxed. Serban spent much of the first half of the fight behind a tight guard, not offering much in the way of exchanges but on the rare occasion he did open up the opportunity would be seized by Donovan, who looked better and better as the contest grew on, the disparity in levels between the pair clear for all to see.

The Irishman demonstrated a spiteful jab all night, stabbing at the Czech’s reddened face, also rattling his chin with thunderous left uppercuts, often catching Serban off-guard. Referee Kieran McCann gestured Serban to his corner to wipe blood from a cut which had opened across his left eye before waving the bout off moments after in the sixth and final round, sealing Donovan’s sixth stoppage in eight fights as he maintained his unbeaten record.

Nick Campbell picked up the vacant Scottish Heavyweight title with a seventh-round stoppage of a tough Jay McFarlane in a scruffy but entertaining scrap, the former sending the latter to the canvas at the start of the seventh with a short right hook turned uppercut on the inside. McFarlane was up quickly but in truth the writing was already on the wall, the face of McFarlane bludgeoned as a result of the damaging straight rights he had absorbed throughout the contest, a shot Campbell could not miss with all night. Referee Kenny Pringle could and probably should have waved the bout off a round or so earlier than he did, but nonetheless the fight marks Campbell’s first title as he moves to 5-0 as a professional.

Cuba’s super-featherweight Robeisy Ramirez scored a stunning third-round stoppage of Ireland’s Eric Donovan, the latter no idea where he was for a moment in the third round after a short-left hook counter on the inside took the Irishman’s legs from under him. Donovan stumbled into the ropes and was stunned, referee Victor Loughlin making the correct call to step in and wave the fight off with Donovan unable to defend himself. Ramirez looked classy from the off out of the southpaw stance, sending Donovan to the canvas in the opening round with the same shot, demonstrating an accurate jab and good footwork throughout. Ramirez moves to 9-1 as a professional while Donovan’s record now stands at 14-2 respectively.