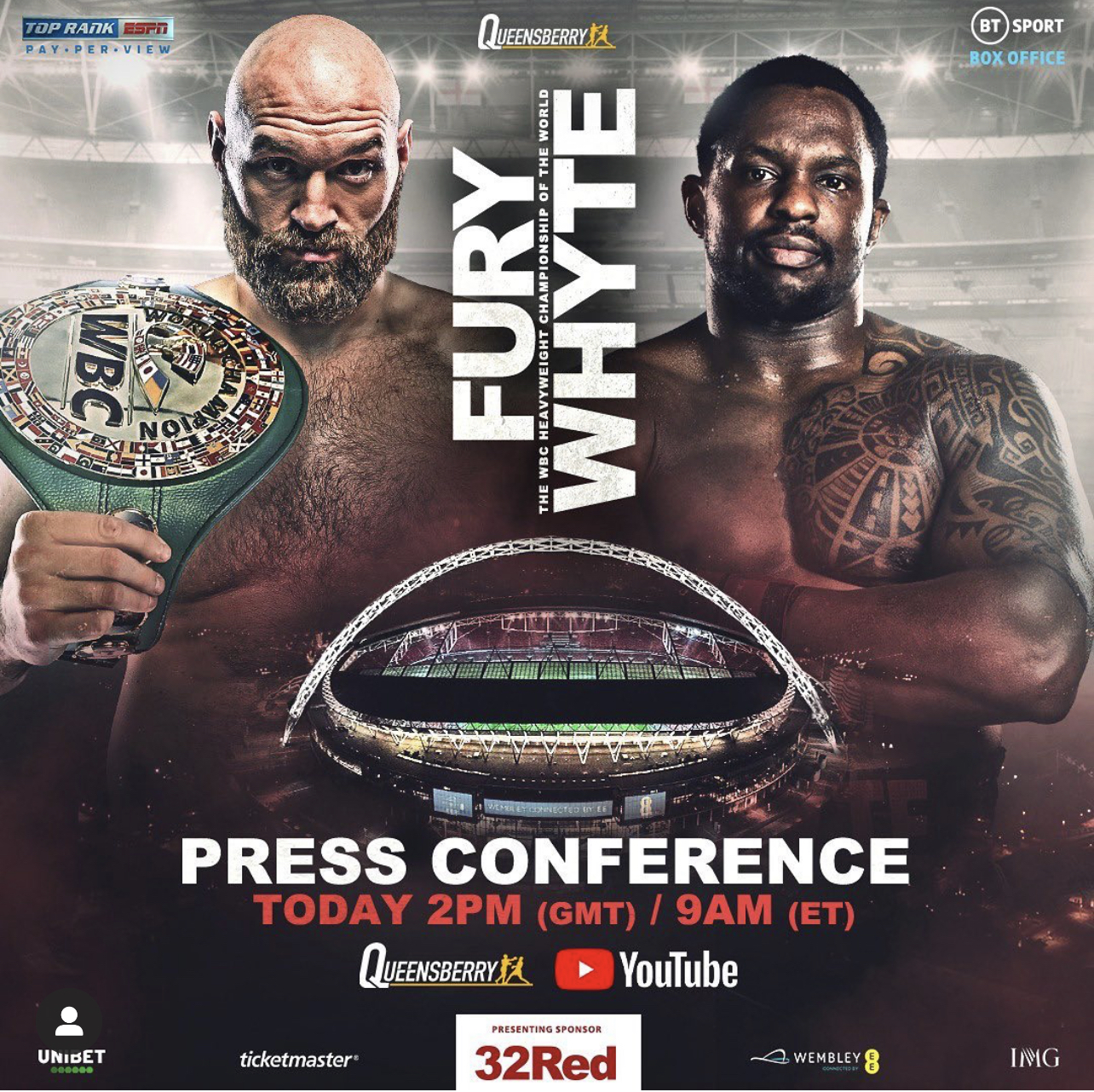 “You’re going to see the difference in levels, the Ferrari racing a Vauxhall Corsa. There’s levels to this game!” Tyson Fury

Whyte however decided not to be present for today’s conference, with promoter Frank Warren, whose Queensberry Promotions won the promotional rights for the bout back in January with a record-breaking bid of $41,025,000, kicking off the conference by lambasting Whyte’s decision not to show up as ‘disgraceful’. “He signed a contract, which he left right to the last minute, and now he’s trying to re-negotiate. One of the things was that he [Whyte] wanted a private jet to fly him in and out today, but we said yesterday, in writing, that we would do that. They didn’t even want to let us use his photograph on a poster. I’ve never heard anything like it in my life. I’ve never heard of a fighter not turning up to a press conference for a big fight”.

“He’s getting eight times more than Tyson [Fury] got to fight [Wladimir] Klitschko, an unbeaten fighter. He’s getting more than [Anthony] Joshua got paid to fight [Charles] Martin. He’s getting more than [Oleksandr] Usyk got to fight Joshua. Champions bank on themselves to win, that’s what they do to become king. You win the title, you get the money, like Usyk did when he went and beat Joshua. Now he’s in the big time”. Warren added “we are where we are, but that’s just not right, we are where we are, but Dillian Whyte isn’t, he’s in Portugal. It’s disgraceful that he’s not here, it’s not professional. If somebody else had won a purse bid, we would have helped to make that work. This is madness”.

Fury was then handed the microphone, describing the four years that have passed since his last fight on UK soil as ‘a rollercoaster of a ride’. “I’ve been across the Atlantic Ocean in the exotic venues of the MGM Grand, T-Mobile, Staples Centre, and [after four years away] I get to come back and showcase on the world’s biggest stage at Wembley Stadium with one-hundred-thousand people there. I’m just putting it on so the fans can come, the people who travelled to Las Vegas can come, the people who stayed up until five in the morning to see those fights on BT Sport can come and enjoy the event on home soil and be a part of history.

“I believe it’s the biggest British Heavyweight fight probably since Lewis-Bruno, there hasn’t been a bigger one since. An all-British showdown for the WBC Heavyweight Championship of the world”.

“When I land the Lancaster bomber on his jaw, it’s going to be over”.

The champion acknowledged the danger in front of him and even pondered the possibility of him losing the fight by knockout. “I know Dillian Whyte’s going to come in prepared and he’s going to come in rugged and rough, game and aggressive, and he’s got a big left hook and a big right-hand. Who knows, it could be me chinned on the night, but I think that both fighters are going for the knockout in this fight, and I just think when I land the Lancaster bomber on his jaw it’s going to be over. That could be in round one, and it could be in round six, I don’t see it going past them”.

The Lancashire-man is notorious for getting inside the heads of his opponents, evident in his dismantling of both former champions Wladimir Klitschko and Deontay Wilder, taunting them at every opportunity in the build-ups to their respective fights. When asked whether he was disappointed at not gaining the opportunity to try the same tricks on Whyte, Fury responded, in typical Fury fashion, climbing out of his seat pacing up and down the stage.  “I’m not concerned because this is the Tyson Fury roadshow and the next stop is London. It’s never about the opponent, whether it’s his face on there or someone else’s, it’s really unimportant. It’s about this man over here [pointing to himself on the fight poster backdrop] and celebrating his legacy and his boxing career, and celebrating it on the biggest stage”.

Warren expanded on this, highlighting the trilogy Fury shared with America’s Deontay Wilder, drawing the first before stopping Wilder in the two that followed. “I remember in the three fights in the States with Wilder, the first one it was all quite jolly and then Tyson got to him. After that, in the next two fights, he didn’t want to engage [with Fury]. He [Tyson] gets into their heads, and I think Dillian Whyte’s worried about that, that’s why he’s not here”.

Host Paul Dempsey then asked Fury about his preparation for the technical aspects he will face against Whyte. “The same we do for every fight. He’s [Whyte] no different to the other opponents I’ve fought in my career – they’re all dangerous, they’ve got a puncher’s chance, they all want to win and they know riches and glory await victory”.

“If I can’t look like Muhammed Ali boxing this guy then I’m in the wrong position and I’m not as good as I think I am. I will chop him to bits, not a problem. I will smash his face right in. You’re going to see the difference in levels, the Ferrari racing a Vauxhall Corsa. There’s levels to this game”.

Fury expressed no sympathy for Whyte for his long wait for a title shot and for being around at the same time of the likes as Joshua and himself, even going far to say that Whyte “should be here today kissing my feet”. “I’m not very good at maths but how many two-hundred-and-fifty grands can we feet in eight-million? Thirty-two times. I’m giving him thirty-two times his biggest payday. He’s very lucky he’s in my era”.

“I’ve given him a new name anyway. He’s called ‘Thrillian Whyte-knickers’ because he’s as soft as what it says in the title. He’s definitely shown the white flag today. He’s given me that much more confidence…he’s terrified”.

Confidence has always been a strong point of the two-time heavyweight champion, with Fury exclaiming “I’m very, very over-confident. People say he’s a down to earth fella, I’m not, I’m an on top of the world fella. If I’m training for a fight then I believe I’m going to win it one billion per cent. Even when I went to Germany and beat Klitschko, I had never had any doubt that I might lose the fight. Confidence is my biggest asset”.

Fury told talkSPORT after the conference he does not want any British officials involved with the fight as a result of the recent controversy surrounding the scoring of Saturday’s Josh Taylor v Josh Catterall fight in Glasgow. Taylor somehow edged a close points decision despite most believing Catterall to have won comfortably, Fury saying “if Dillian does beat me, give him the decision. Do not try and rob anybody”.